Energy was the only sector to close positive as U.S. oil hit its highest price since Oct 2014. 📈

Goldman Sachs got wrecked on earnings. 💣 See more on this and other banks below.

The 10-Year Treasury yield hit its highest level since January 2020.

Activision Blizzard’s stock blasted 25.9% to four-month highs after Microsoft acquired the business for $68.7 billion. This could be the largest deal in the game industry’s history. 🎮 🔥

Microsoft has reportedly agreed to take out gaming giant Activision Blizzard in a $68.7 billion all-cash deal, marking Microsoft’s costliest acquisition in history — and perhaps its most important in recent history. 💡

The proposed deal will see Microsoft pay $95/share, a 45% premium to the company’s stock price as it traded before the announcement. The acquisition comes after months of internal turmoil at Activision Blizzard. In July 2021, we highlighted troubles at Activision Blizzard and allegations that the company allowed/condoned “frat boy culture.”  Some months later, in September 2021, we reported on Activision-Blizzard’s ongoing legal battles with state and federal regulators.

Weakness is not forgiving to companies, especially to media properties like A-B. Activision Blizzard was definitely weak — and ripe for takeout. However, there’s no guarantee this deal will close. 🙅

Microsoft has spent the last few years stacking up gaming properties to build the foundation of its industry-leading Xbox Game Pass. With Microsoft’s acquisition of Zenimax Media (the owner of Bethesda) last year, Xbox grew its game studio footprint to 23, putting Microsoft in a fundamentally different ballpark from its competitors. Microsoft’s commanding presence in the gaming industry makes it likely that this deal will be shot down by regulators. ❌

After all, Microsoft is the second-biggest company in the world… just hours before today’s deal ran off the presses, the U.S. Federal Trade Commission (FTC) and Department of Justice (DOJ) indicated their desire to rewrite merger rules to prevent large mergers (like this one.)

Naturally, investors aren’t fully convinced this deal will go through. 🤔 $ATVI rose 26% to $82.31 today, which is below Microsoft’s $95/share offering.

Another obvious issue is that (more progressive) countries are likely to doubt this acquisition even more than the U.S., since Activision Blizzard operates in dozens of countries. This international problem means the deal could take over a year to close, which is fair considering the consequences of such a large merger.

However, there’s a new game in town 😉 at Activision Blizzard. A number of the company’s employees continue to push for  unionization… and for a purge of high-ranking execs who knew about the company’s problematic nature. That means AB will probably still need to start fresh once its CEO is inevitably kicked to the curb, dozens of employees leave, and the business has no choice but to reset. 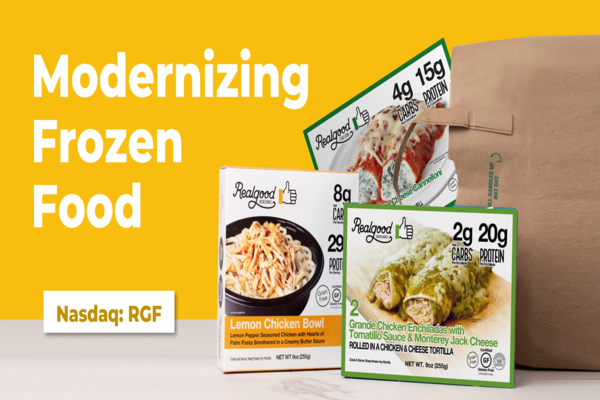 Real Good Foods recently went Public (Nasdaq: RGF). RGF is a High Growth branded Food company and one of the only brands in Frozen food to offer low carb, high protein, nutritious foods. In over 15,000 stores since launch, including Costco, Walmart, Sam’s Club, Kroger, and Target.

After a weeks-long controversy over the deployment of 5G technology around airports, major telecom companies expect to launch an upgraded version of 5G nationwide tomorrow.

Wireless carriers such as AT&T and Verizon have already punted the rollout of 5G C-band service in sympathy to regulators, who are concerned that the new service might interfere with aircraft equipment. After being asked at the last minute by regulators to punt their launch, the carriers agreed to impose a buffer around most major airports… but they’re not happy about it at all. 🥊

However, Boeing has reportedly advised some international airlines to “not to operate the 777 to the U.S. in light of 5G deployment.”  Consequently, Emirates, Japan Airlines, Air India, and ANA will reportedly suspend flights to nine cities. The cancellations will only affect a handful of flights.

In the grand scheme of things, there’s likely nothing to be concerned about: 40 other countries have already successfully implemented 5G service near airports without disrupting flight patterns.

AT&T voiced its opinion on the FAA’s inability to catch up with rollout plans:

“At our sole discretion we have voluntarily agreed to temporarily defer turning on a limited number of towers around certain airport runways as we continue to work with the aviation industry and the FAA to provide further information about our 5G deployment, since they have not utilized the two years they’ve had to responsibly plan for this deployment.”

Verizon also eloquently expressed its frustration with airlines. The company shared “The Federal Aviation Administration (FAA) and our nation’s airlines have not been able to fully resolve navigating 5G around airports, despite it being safe and fully operational in more than 40 other countries.” Yikes. Shots fired… 🔥 🔪

The Biden Administration is coordinating with the FAA, major airlines, and wireless carriers to resolve the delays. Read more about the drama at CNBC.

Crypto exchange crypto.com has been hacked, leaving hundreds of users with missing ETH. The total loss is reported to be $15 million.

The attack was acknowledged by the exchange on the evening of Jan. 16, during which the company paused withdrawals for an investigation and insisted that all funds are safe.

The hacker reportedly bypassed two-factor authentication and withdrawal whitelists, which has raised eyebrows because hacking these systems would be incredibly difficult. 🤔 crypto.com also is SOC2 compliant, which supposedly makes it “the most secure crypto platform worldwide.“

This loss puts the exchange’s credibility to test. crypto.com’s CEO Kris Marszalek indicated that “no customer funds were lost,“ despite the fact that renowned crypto auditing companies such as Peckshield and Certik proved that this is untrue. Scores of customers complaining of missing funds have indicated that the company, which has spent billions to acquire the naming rights to the former Staples Center in LA and celeb TV spots, has not replaced the stolen crypto. (Because, as we have already heard… the funds are safe!) 🙄

The crypto.com hack comes in at #29 on the Rekt News leaderboard, a leaderboard which tracks the biggest thefts in crypto. This is by no means the biggest hack in crypto history, but it is one of the largest from a credible crypto exchange. The only hack of a centralized exchange (CEX) larger than today’s crypto.com hack was the Kucoin hack on Sept. 29, 2020, ranked #12. Nonetheless, it’s unbecoming of a multi-billion dollar CEX to leave their customers out to dry… other CEXes who have failed to side with customers have been rightfully scrutinized.

The world of crypto is risky, but it is transparent. Considering the credible testimony of crypto industry leaders, we know that crypto.com is lying about being hacked and has not indicated whether or not it will replace the lost funds of compromised users.

The broader crypto market was down today. 👎

Big banks got hit by another wave of selling as lower trading volumes have negatively impacted profitability since the Fed reduced asset purchases. The financial ETF $XLF closed negative for a third straight session, falling 2.23% today. 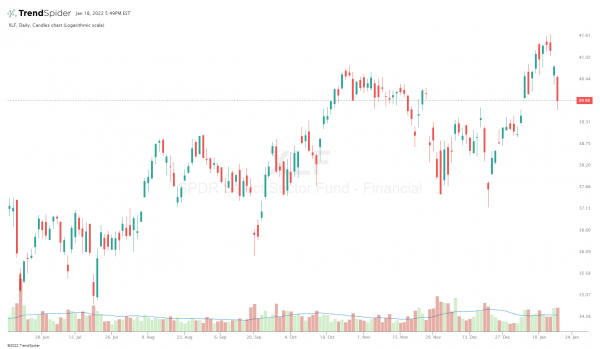 Goldman Sachs tumbled 7% to six-month lows after the bank fell short of earnings expectations. $GS reported earnings of $10.81/share, much lower than the consensus estimate of $11.76/share. 👎 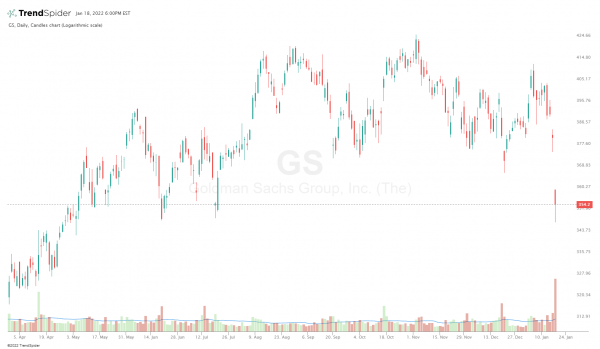 YouTube just announced that it’s shutting down its original programming division. YouTube’s programming unit is responsible for shows like ‘Cobra Kai,’ a Karate Kid spinoff, but the division wasn’t popular enough to justify keeping it open. YouTube will instead focus on its content creators, live shopping programming, advertising, the platform’s Black Voices fund, and YouTube shorts. Read more in WSJ.

Alliance Data Systems Corp. (ADS) will lose its credit card business with BJ’s Wholesale Club to Capital One. BJ’s Wholesale Club is a members-only wholesale credit-card account, and one of the largest accounts with ADS — BJ’s credit cards hold about $1.5 billion in balances. Unfortunately for ADS, BJ’s has found a new partner-in-crime: Capital One. BJ’s is also suing ADS, claiming the company is intentionally delaying the transfer of balances. Read more in WSJ.

Peloton could lay off up to 41% of its sales and marketing staff. Business Insider reported on leaked audio from the company’s executives which commented on layoffs and the dire state of some of Peloton’s store locations. The audio also hinted that e-commerce and retail teams could experience layoffs in the future. Read more in Business Insider.

SoFi acquires bank charter. We’ll probably touch on this one in tomorrow’s Rip, but fintech giant SoFi has finally secured its long-awaited bank charter. The stock rose 17% in AH and trended on Stocktwits.

🌊 When the Listing Is Underwater, Literally

💡How the U.S. Fell Behind in Lithium, the ‘White Gold’ of Electric Vehicles