The King of Crypto Hacks 👑

Good evening everyone! Welcome to another day in the stock market. 🤑 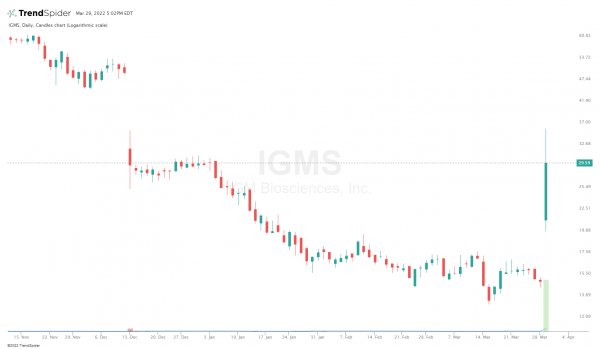 Robinhood hopped 24.2% today after adding four hours to its extended trading hours. 🌙 Robinhood said it will be open from 7 a.m. to 8 p.m. ET in an effort to eventually provide 24/7 stock trading. 🎉

Despite sky-high inflation and dampened outlook for the U.S. economy, The Conference Board’s consumer confidence index posted an unexpected rise in March. Consumer confidence, which is an indicator that helps predict recessions, was largely expected to post another down month. 💡

This unexpected rise in confidence contradicts the market’s outlook, which is leaning towards a recession. We’ve reported that the bond yield curve is flattening, approaching inversion in the mid-term (3-7 years). That inversion typically means investors anticipate a recession in the coming period.

Today, the 2-year Treasury yield surpassed the 10-year yield, meaning short-term interest rates are rising above long-term rates (increasing short-term rates reflect poor long-term market sentiment, meaning investors are losing confidence in the future of the U.S. market.) When investors begin to worry about recessions, they purchase long-term Treasury securities with expectations that those securities will be more valuable after the economy returns to normal.

However, as U.S. consumer confidence looked strong in The Conference Board’s report this month, a case could be made that investor bearishness might be overrated. 🤔 The confidence figure reached 107.2, higher than the 105.7 it posted in February — this increase is a sign that healthy jobs numbers, the end of mask mandates, and decreased unemployment are carrying more weight than inflation and war fears. About 500,000 jobs were added this month as unemployment dipped to 3.7%. 📈

That being said, 40-year inflation highs are still worrying consumers. According to The Conference Board, those surveyed think inflation will increase to 7.9%. The Conference Board’s expectations index measuring 6-month sentiment on economic conditions also lowered to 76.6, an 8-year low. 👎

These points deserve emphasis because a) inflation is likely to go a lot higher if these “hot” energy prices stick and b) the index of expectations (aka outlook) on consumer confidence is worrisome because it implies that consumers are concerned about the future.

In summary, consumers are more optimistic right now than investors expected, consumers are worried about the days ahead, and investors are pricing in a recession. 😪 Consumers might be wrong… the days ahead could be great. However, a yield curve has come before each recessionary period since 1956. Analysts think it’s too early to say what’s in store, especially because the U.S.’s yield curve has demonstrated a flattening pattern throughout 2022. It still isn’t completely inverted.

Axie Infinity ($AXIE.NFT) set the standard for what “play-to-earn” (P2E) games on the blockchain could look like — the multi-billion dollar ecosystem they’ve built includes thousands of NFTs, two ERC-20 tokens (which are collectively worth billions in market cap), and a community base rivaling even major blockchains. 💪

Unfortunately, the P2E giant missed the mark on one thing — security. The game was exploited for 173,600 Ethereum and $25.5 million USDC. The culprit? The bridge that helps money move between Ethereum and the game’s blockchain, a side-chain called Ronin. Perhaps even more embarrassingly, Axie Infinity didn’t even notice the hack for days. Oof.

Investors use bridges to move non-native assets onto new chains without needing to buy, sell, or swap assets on exchanges (e.g: to move Bitcoin onto Ethereum; to move $USDT from one chain to another.) 💡

However, bridges often custody assets which back the asset to be issued on another chain. Wormhole, a bridge which was hacked last month, was hacked for $326 million. If not for the generosity of a donor, any Wormhole-denominated assets which traveled across the bridge would have been uncollateralized (that implies a complete loss for people who moved assets across the bridge to other chains.)

That’s why bridges are a black swan for crypto. 🤷 Ethereum co-founder Vitalik Buterin even echoed concerns about the “security limits of bridges” and cross-chain applications. He said that it would be safer to “hold Ethereum-native assets on Ethereum … [and] Solana-native assets on Solana” than to send non-native assets across the bridge.

The Ronin exploit isn’t that different from Buterin’s warning. The only major difference is that the Ronin sidechain isn’t explicitly financial, unlike many other applications and bridges that have been hacked. Instead, Ronin is the chain which intermediates most transactions for Axie Infinity. Unfortunately, that means the game’s economy has been rugged. 😬

The hack is an unprecedented one, setting a new “high score” on the Rekt News leaderboard tracking hacks in the DeFi and crypto ecosystem. The cumulative losses were reported to be $624 million, which was $23 million greater than the previous front runner. 🤦

On the news, the Axie Infinity governance token $AXS.X took a -7.7% hit. The game’s in-game currency, Smooth Love Potion ($SLP.X), lost- 8.3%. In the grand scheme of things, those losses are not that big when compared to the damage done to users and the broader ecosystem. However, the Ronin hack might count as a striking loss of credibility for one of the blockchain’s sweetheart projects. 💔

They might be in luck, though. The alleged thief reportedly sent the money to major exchanges such as Binance and FTX, which means the stolen funds could stand to be returned. FTX CEO Sam Bankman-Fried even acknowledged that the exchange was investigating and would take action where appropriate, which might mean that the exchange could return funds to the exploited bridge.

The Lovesac Company smashed its fourth quarter earnings report and the stock charged 20.82%. $LOVE’s earnings came in much higher than anticipated. Revenue rose 51%. 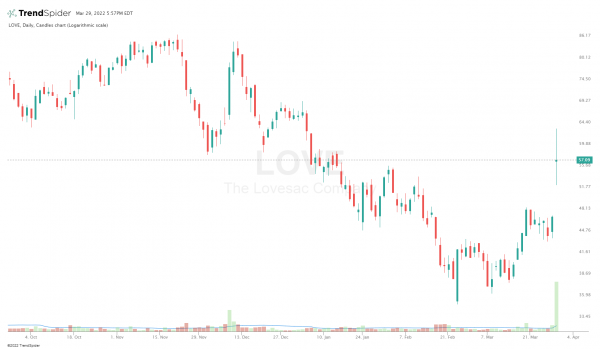 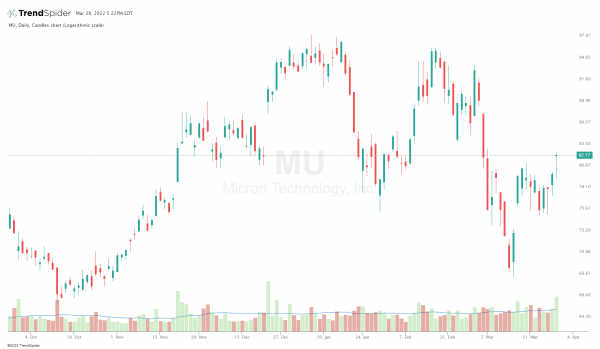 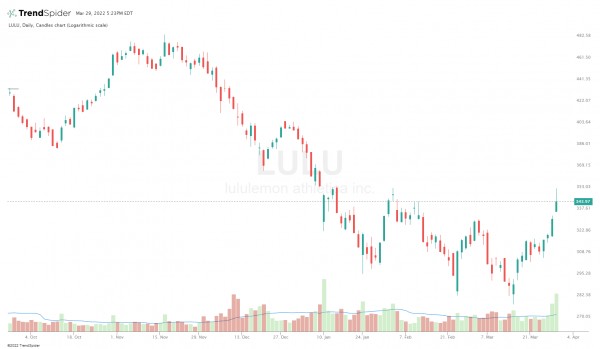 You can check out the full Stocktwits earnings calendar here! 📅

💉 CDC recommends new booster shot for Americans over 65. The Centers for Disease Control and Prevention have recommended that Americans 65 or older (or Americans who are immunocompromised and over the age of 50) to get a second dose of the COVID-19 vaccine. The authorization comes in tandem with a small, but recognizable, rise in COVID cases worldwide. Read more in Axios.

🛍️ Bye-bye, brand loyalty. We hardly knew ya. What’s more important than a brand? Price. Americans are fleeing from the comfort of their favorite brands, seeking cheaper alternatives in light of sky-high inflation figures. Inflation can be credited with disrupting and changing customer buying behaviors. Read more in WSJ.

💀 Verizon users are being spammed by their own phone numbers. Verizon users are receiving spam texts from numbers that appear to be their own phone numbers — a company spokesperson acknowledged that the spam texts are probably a targeted attack on Verizon customers. The Verge published the following about the spam messages: “In the hours since we published our original story, many more Verizon customers have reported receiving that same exact text about a free gift with a link at the end. In my case, the link forwarded me to Channel One Russia, a Russian state media network.” In summary, if you’re a Verizon user and you receive a message from your own number, you probably shouldn’t open it. Read more in The Verge.

🍔 Invest in the burger-flipping, french-frying robots increasing restaurant margins by 300%*

💡 Confused by the lingo and data points around NFTs? Checkout episode 4 of NFTs 101.

💰 How the Rich Avoid Paying Taxes

🏆 Here’s Something Positive About the Oscars In Light of All The Negative Stuff: Nicolas Cage Won Best Actor Nearly 10 Years Ago

It was a big red day across the board as investors fear more rate hikes and higher chances of a recession  — let’s see what you missed. 👀

Today’s issue includes a diamond in the rough, Meta’s battle with European regulators, and a recap of several earnings movers. 📰

Stocks trended lower and notched their third straight down day as the safe-haven U.S. dollar caught a bid — let’s see what you missed. 👀

Earnings season is slow, but that doesn’t mean there aren’t any big movers. So let’s see what today brought. 📝

AutoZone reported earnings before the opening bell. The company put the pedal to the metal, posting stronger-than-expected earnings. $3.99 billion in revenue, beating estimates by $130 million. Earnings of $27.45 per share beat estimates of $25.15.

A Diamond In The Rough