Bitcoin and Altcoins Bounce Back, But For How long?

Nice to see a mostly green day for crypto, and a (hopefully) green close to the week as well. Here’s what’s happening:

For eleven miserable weeks, crypto has done nothing but fall lower and lower. But crypto traders and investors may be in for at least a reprieve in the opposite direction as altcoins are leading the way to close crypto in the green for the first time in twelve weeks.

Newswise, it’s a bit of a mixed bag today. We’ll take a look at what Cardano founder Charles Hoskinson did in front of Congress yesterday, the Harmony hack, the crypto bounce back and NFTs in the gaming space.

Let’s look at how crypto has done so far today:

In Hoskinson, We Trust

One of the biggest and most important events for cryptocurrencies just happened, but there was a surprising lack of hype and attention given to that event. Yesterday, Charles Hoskinson, founder of Cardano ($ADA.X) and co-founder of Ethereum ($ETH.X), testified to a Congressional agriculture subcommittee. The focus of the hearing was on cryptocurrency regulation. We’ll summarize below, but you can watch the entire hearing on YouTube.

Mr. Hoskinson was asked by MN Representative Michelle Fischbach, “Whether we should regulate cryptocurrencies as commodities or securities, what do you think the benefits or drawbacks are?”

Hoskinson said cryptocurrencies are more like “…financial stem cells that are more fundamental than a particular category like a currency or a commodity. It depends on the markets they’re traded on and the use and utility they have.”

Regarding regulation, he made a point that lawmakers need to identify what policy consideration they are attempting to satisfy: compliance? Consumer protection? Market stability? He continued, “We ought to have the humility to admit that innovation makes specifics difficult; we should focus on principles instead.”

Thank God Congress asked him, not some of the other big wigs in the cryptocurrency industry. Too many other cryptocurrency ‘experts’ and ‘founders’ act like morons and dress like they are an extra for the Capitol in the Hunger Games movies. Hoskinson behaved like a statesman and a professional – a perfect steward for the crypto world. 🙏

Let’s face it, when it comes to Non-Fungible Tokens (NFTs), your reaction is either ‘ooo, this is the future!’ or ‘NFTs are this year’s version of 2018’s ICO scam-fest’. Regardless of your opinion, the fact is NFTs are here to stay. But, just like the Internet in the late 1990’s/early 2000s and the ICO debacle in 2018, it will take time for the market to shake out the stupid and the bad.

NFTs have a use case that expands well beyond the digital art of monkeys smoking cigars, and perhaps one of the largest untapped areas is the ‘traditional’ gaming space. I’m talking about FPSs (First Person Shooters) like Call of Duty, Battle Royale games like Fortnite, and MMORPGs like Elder Scrolls Online.

Forget about blockchain-based Pay-To-Earn gaming right now. Leave Axie Infinity ($AXS.X) and The Sandbox ($SAND.X) out of this discussion. I’m talking about using NFTs as a monetized commodity in the gaming space. Think cosmetics in Fortnite and Team Fortress 2 instead of loot boxes in the dumbest Blizzard ($ATVI) game in history, Diablo Immortal.

Fortnite has an estimated 350 million registered users with a daily active player base of 30 million. A recent study indicated that, on average, 69% of Fortnite’s players spent $85 on skins – digital costumes that change or add to their in-game appearance. So it’s not a stretch to say that these companies are probably analyzing how much more players would spend if, for example, only 100 of a particular skin were available and put up at an auction?

Because if gamers and crypto folks have at least one thing in common – they like to peacock when they’re winning.

Expect to see more detail and a deeper dive into this kind of content in the Litepaper in the future! 🤖

What is a bridge in cryptocurrency? A bridge is a way to send assets from one blockchain to another. Most blockchains are not interoperable, so bridges are used. Think of a bridge as a custody holder.

I can’t send crypto ABC to crypto XYZ because they are not compatible. However, I can use a bridge to send my ABC to XYZ.

But what happens if the bridge gets hacked? Well, your synthetic ABC is worthless. It’s a piece of paper saying that the ABC is yours, but someone took it. Kind of like how NFT art functions if you think about it. 🤬

Harmony joins the ranks of other big hacks that have already occurred this year. For example, the Axie Infinity Ronin bridge lost $620+ million in Ethereum and USD Coin in March, and the Solana ($SOL.X) bridge, Wormhole, was hacked for 120,000 Ethereum in February. 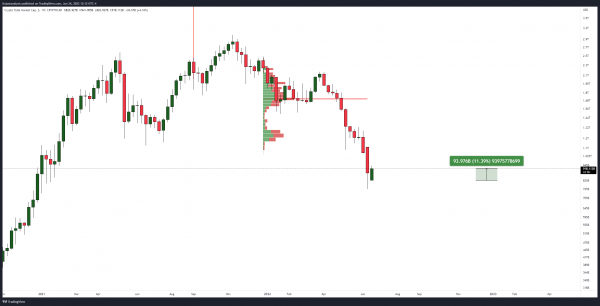 A nice green day and this week with for cryptocurrencies. The chart above is the Total Crypto Market Cap Index, which gapped lower this week by -6% but has since rallied above last week’s close. Unless something dramatic changes, crypto might pull off a week of gains for the first time in twelve weeks.

We might be observing the very beginning of a relief rally for cryptocurrencies. While the Total Crypto Market Cap Index is up, Bitcoin is still lower by a tiny -0.3% for the week. However, the Altcoin Index is outperforming Bitcoin and is up over +7%.

Time cycles and oscillators continue to point to a probable rally. However, how sustained it will be and how long it will last remains to be seen. 🤔

💵 Axie Infinity developers are reimbursing customers for the $600+ million plus hack. The hack of the AXS Ronin bridge left players/customers reeling in fear of their assets having disappeared, holding a now worthless derivative on the Axie network. Thankfully, the devs are stepping up and making amends. Read more at Forbes.

🚧 Solana lending platform Solend reduces liquidation free from 5% to 2%. The lending platform was at risk of insolvency due to a single user whose holdings amounted to roughly 95% of the entire liquid pool of Solana ($SOL.X). The community reduced the lending amount to $50 million per account and has reduced liquidation fees to address recent volatility. More from Blockworks.

🌓 MATIC ($MATIC.X) leading altcoins this week, up more than 50% this week. From a technical analysis perspective, MATIC and the broader altcoin market remain considerably oversold, so a reversion move was not unexpected. However, some positive news regarding increased privacy for voters in DAOs may have contributed to the bounce. Check out CoinDesk’s news.

Good news for Voyager ($VGX.X) customers – the cash deposits in the Metropolitan Commercial Bank ($MCB) were cleared to be returned to customers by Judge Michael E. Wiles of the  U.S. Bankruptcy Court for Southern District of New York.

Regarding the bankruptcy proceedings, Voyager’s presentation at the second-day hearing revealed and, hopefully, relieved a significant amount of FUD. The presentation is only 12 slides long but provides some great information and addresses concerns made by customers who filed letters to the Court. Interestingly, Voyager also addressed concerns made on social media and other forums.