Oof. Last week was brutal for bulls. Well, it was brutal for short-term traders who are long and anyone who has leveraged longs. For long-term bulls, the lower prices go, the happier they get. By the way: if you want to skip the nerdy bits with Elliot Wave Theory, just fast forward to the end of this article for the price levels to watch.

What Is Big Money Doing?

If you don’t know anything about Elliot Wave Theory, that’s fine – because all you want to know is how low Bitcoin could go and/or if the downside movement will stop soon.

Assuming Bitcoin has another leg lower, extending to a 5th Wave, Bitcoin may have a deeper trip south than some expect. Wave 5 is usually: 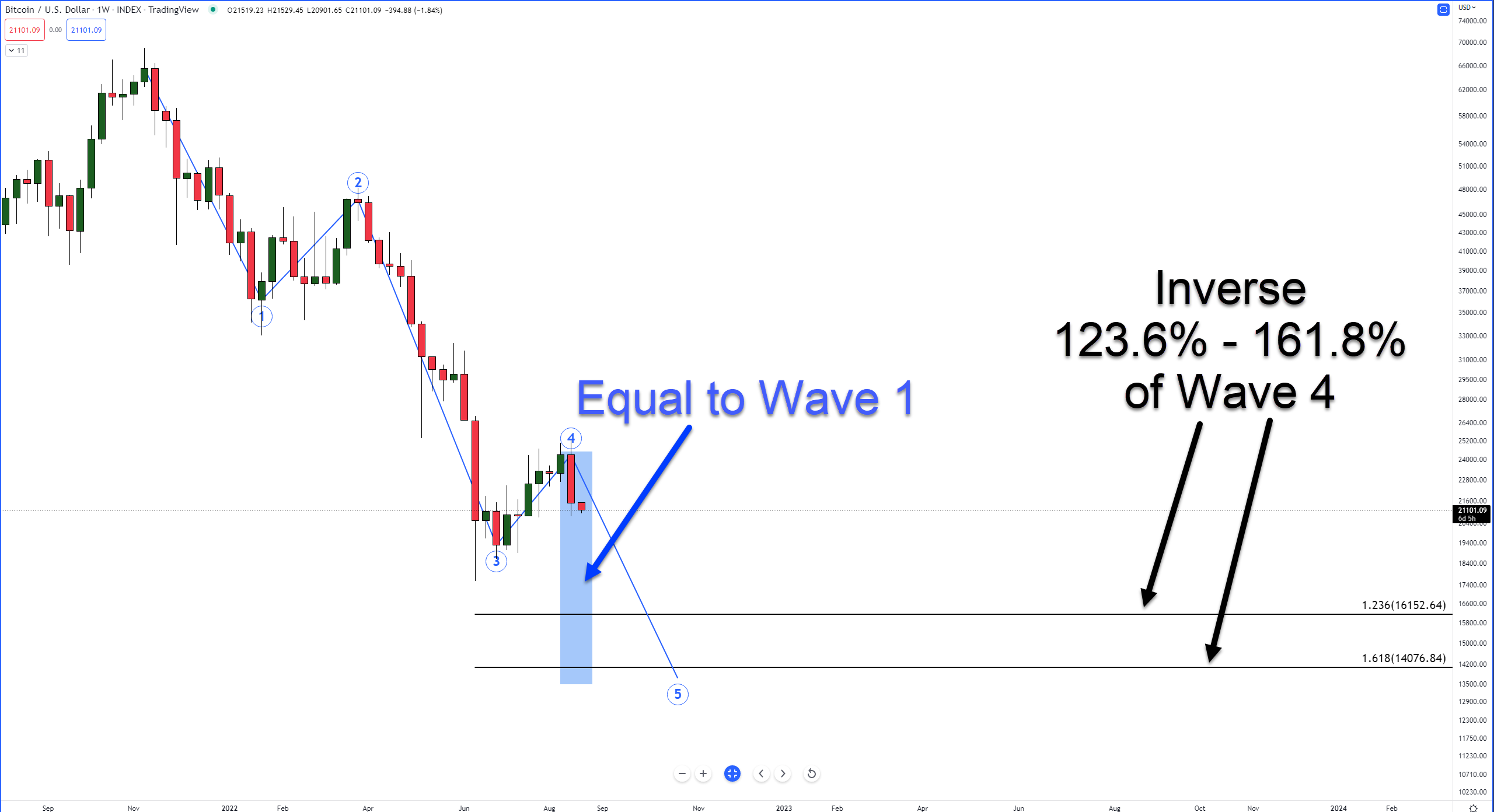 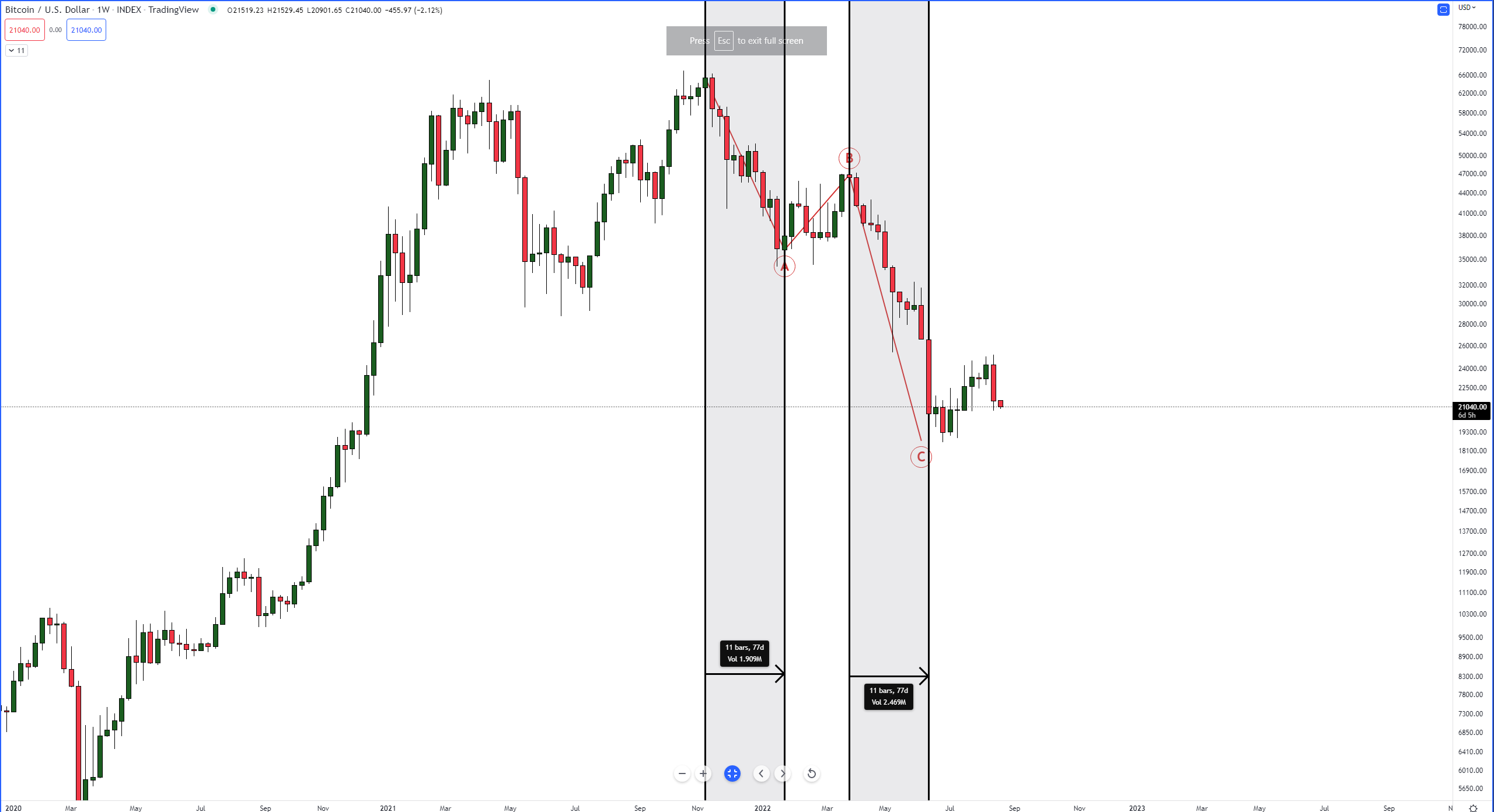 The Simple Zigzag pattern is one of the only Wave patterns in Elliot Wave Theory with a time rule. Wave C needs to equal the time of Wave A. Is it? On the weekly chart, Wave A is eleven bars, and Wave C is eleven bars.

I’ll end the Corrective Wave analysis and construction there – more could be added, but this is already getting into the over-the-top realm. Hey, if you’re still with me, great!

Moving to the daily chart, the structure here changes quite a bit. In fact, from a daily chart perspective, nothing here looks like there’s an opportunity for being bullish. And as far as where Wave 1 ends – no one knows yet. 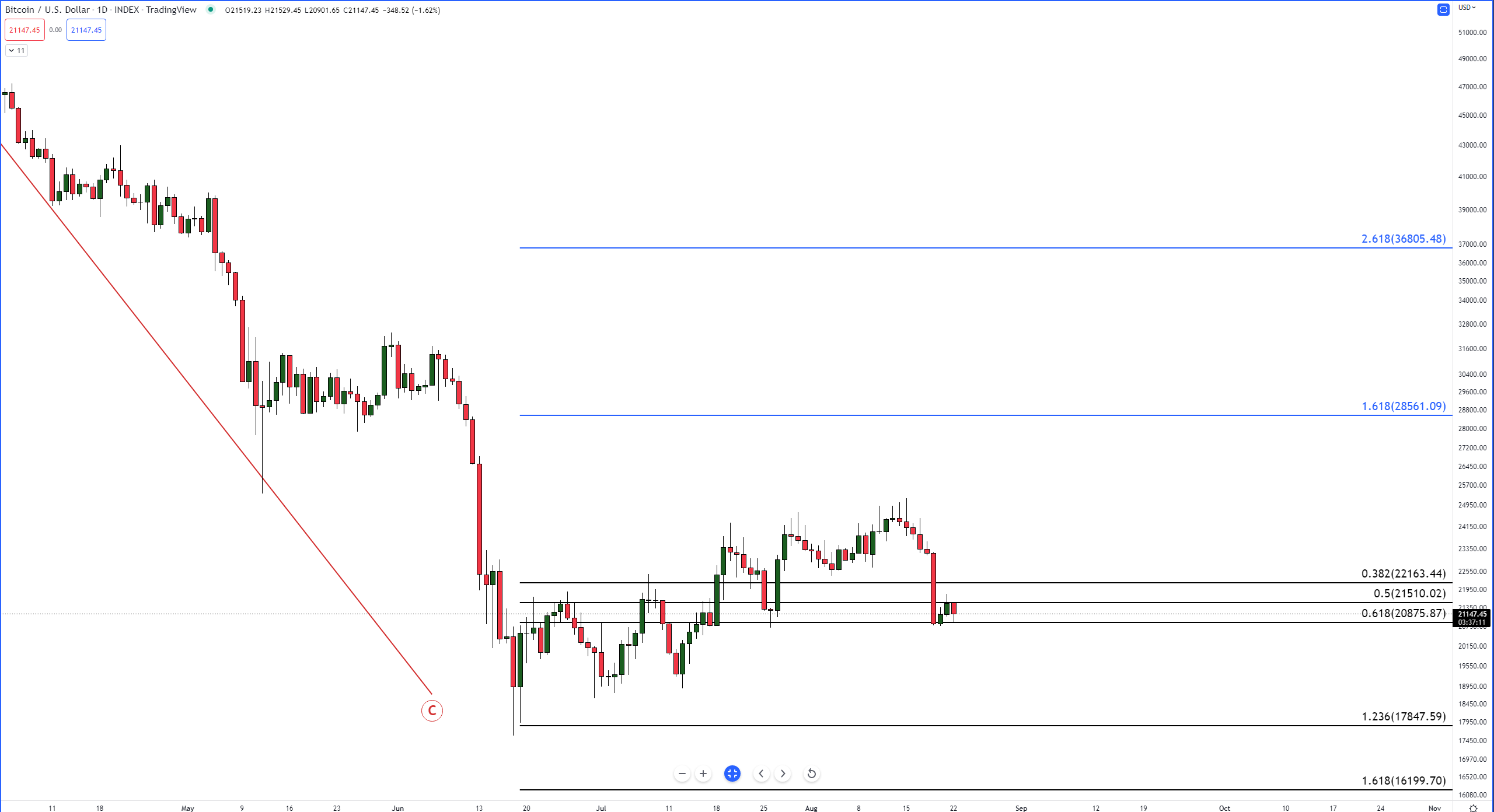 Let’s take what’s formed so far. First, it doesn’t really look like an appropriate structure on the daily chart to confirm a Wave 1 – but if we do a Fibonacci retracement of the prior upswing, then Bitcoin has retraced enough of that last move to equal Wave 2 – but, again, the structure just isn’t there on the daily.

Again, you’ve got an approach and analysis style mixed with staunch, hard, static rules combined with some dynamic and flexible interpretation; you’ve got a recipe for differences of opinion and outlook. 💎

BlockFi is another one of the many entities to collapse following FTX’s fall. But BlockFi had an ugly 2022 even before Luna’s ($LUNC.X) or FTX’s death. ‘

Crypto 101 – Exchange Tokens, What Are They?

Just when you think you’ve tackled the cryptocurrency universe, something new always seems to pop up. One of the newer creations in crypto is the rise and use of Exchange Tokens. You might have heard of a few of them: Cryptom.com’s Cronos ($CRO.X), Binance’s Binance Coin ($BNB.X), and the now infamous FTX’s token, $FTT.X.

Exchange tokens are really nothing more than a type of cryptocurrency known as a utility token. They can be bought and sold just like Bitcoin ($BTC.X) or Ethereum ($ETH.X) – but they have the added benefit of doing something if you’re using it on the native crypto exchange.

It’s a bloodbath out there, and there’s no way to make it sound any better than that.

If you want to know what the heck happened with FTX ($FTT.X), read yesterday’s quick post that highlighted what happened.

One of the largest wallets used by cryptocurrency traders and investors, MetaMask, announced a new change that has put many of the crypto community on edge.

MetaMasks’ developer, ConsensSys, announced an update to its privacy policy informing users that MetaMask now collects IP addresses if the users connect their wallet through Infura – also owned by ConsensSys.