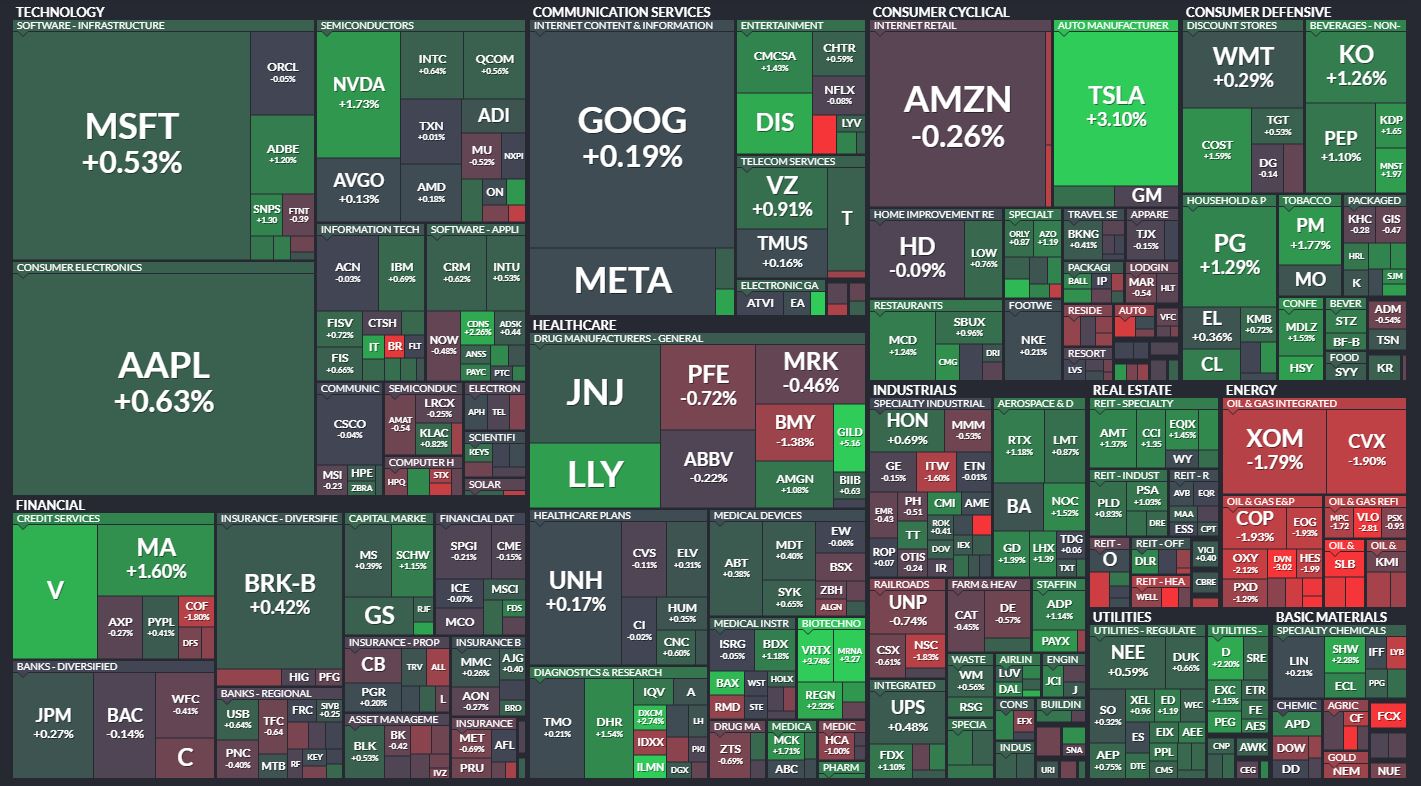 In international news, China is full of surprises. First, the country unexpectedly cut interest rates as their economic data continues to miss forecasts. Next, Chinese tech giants like Alibaba and Tencent shared details of their algorithms with the country’s regulators as Beijing looks for more oversight over its domestic internet sector. Lastly, a global heatwave continues to pressure power grids and trade routes, including China’s Yangtze river, which is at significantly lower than historical levels. 😮

Japan managed to avoid a recession as its Q2 GDP grew 2.2%, buoyed by consumer spending. 🛍️

Snapchat was up over 5% after the company said Snapchat+ reached over 1 million subscribers and introduced new features. 📱

Nexstar Media Group is purchasing a 75% stake in the CW Network from Paramount Global and Warner Bros. Discovery. 🤝

Tesla CEO Elon Musk said that the company has now made over three million cars, with its Shanghai factory producing a million of them. 🚗

In crypto news, Bitgo is seeking $100 million in damages from Galaxy Digital after it called off its $1.2 billion acquisition. Meanwhile, Skybridge Capital expects Bitcoin to reach $300k in six years based on ‘a lot more commercial activities.’ ₿

Remember Adam Neumann, the founder and former CEO of WeWork? The one surrounded by controversy over his leadership and self-dealing who left the company with a massive payout amid a failed IPO?

We know, we know, we just did this a few months ago when he raised a ton of money for his blockchain-based carbon credit company, Flowcarbon.

We haven’t heard much about that recently, but this time he’s coming to a home near you with his new residential real estate company called “Flow.” 🏘️

The company’s website offers little details except that it should launch in 2023. However, The New York Times says that Flow is “effectively a service that landlords can team up with for their properties, somewhat similar to the way an owner of a hotel might contract with a branded hotel chain to operate the company.”

While the business is more or less still at the idea stage, it just received $350 million in funding from venture capital firm Andreessen Horowitz. 💰

The firm outlined in a blog post its thesis for its largest single-check investment ever, focusing on the ongoing housing crisis and Adam Neumann’s past success in transforming the real estate space.

Regarding the investment in Neumann, the blog post essentially says that his efforts at WeWork were largely underappreciated and that the firm loves “seeing repeat-founders build on past successes by growing from lessons learned.”

That’s certainly one way to put it.

We’ll have to see if this time is different, but the massive raise ruffled a lot of people’s feathers today (and rightfully so). 😤

Finally, to add to the lols, the cryptocurrency $FLOW shot up on the news. I guess the algorithmic traders’ systems haven’t quite figured out how to differentiate between ticker symbols just yet.

Another win for the efficient-market hypothesis and another saga to watch in the years ahead. 🤷‍♂️

Grilling Up A POWWerful Earnings Recap

We’ve recapped a few big movers from today’s earnings calendar, so listen up. 👂

It’s been a rough year for shares of grill maker Weber, but investors cheered today after the company cooked up some positive earnings news for a change. 👍

Although its loss per share of $0.41 was wider than expectations of $0.07, it did marginally beat on revenues ($526.9 million vs. $526.2 million). More importantly, however, investors are focused on adjusted EBITDA, which came in at $11 million, well above estimates of $4 million.

On the negative side, gross profit dropped 49%, hit by higher freight and commodity costs, as well as promotional activity. In addition, much like other companies, it’s seeing a weaker macro environment affect demand, and significant currency devaluations impact its sales and earnings. 📉

With that said, the company remains optimistic that its cost-cutting measures can save it at least $110 million in fiscal 2023, leaving it room to weather the economic storm.

Whether or not investors are buying into the turnaround story remains to be seen. But the stock saw a nice pup today, up around 7%. 📈 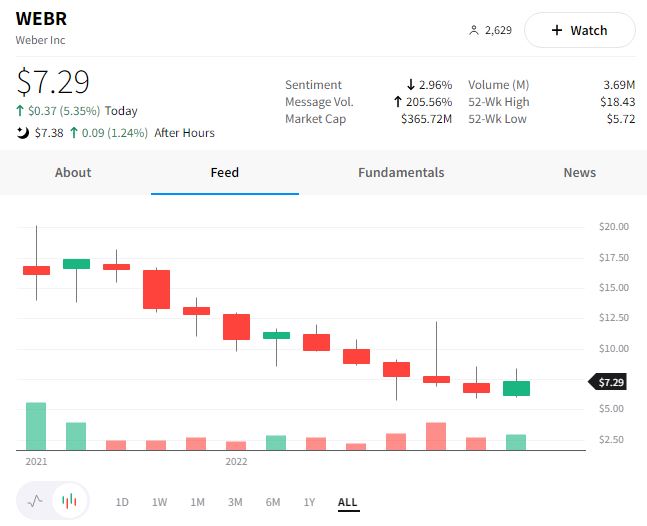 Ammo Inc. had a rough session, falling 9.70% in regular hours and another 9% after reporting its earnings. 🔻

The stock’s initial selloff began after the company announced plans to separate its ammunition and marketplace businesses into two independent publicly traded companies.

Then after the bell, its decline accelerated when the company released its earnings report. The company saw net revenues increase by 36.6% at a gross margin of 29.8%, with adjusted EPS at $0.09. It also reiterated its 2023 fiscal-year guidance.

The two releases gave investors a lot to chew on today, though they don’t seem too thrilled based on the stock’s initial reaction. 👎 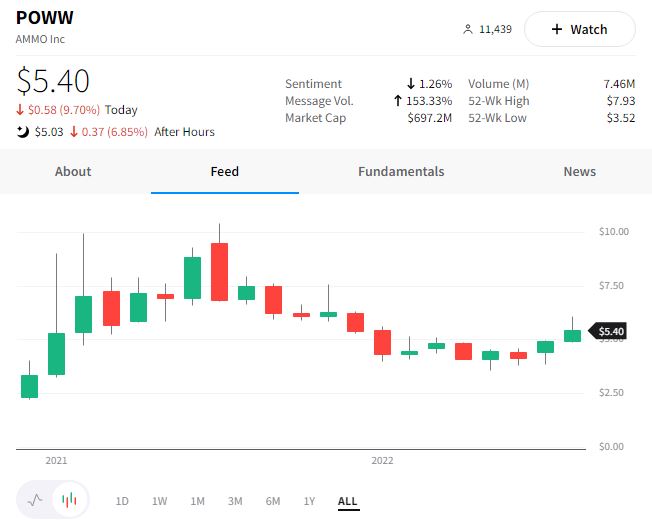 The company experienced user declines across categories, partially offset by a boost in subscription revenues and paying users. Like many others, it spoke about a challenging macro environment and the cost optimization and operating efficiency steps it’s taking to offset them.

Shares were up 5.90% during the regular trading session and added another 1.50% after the company reported. 📈 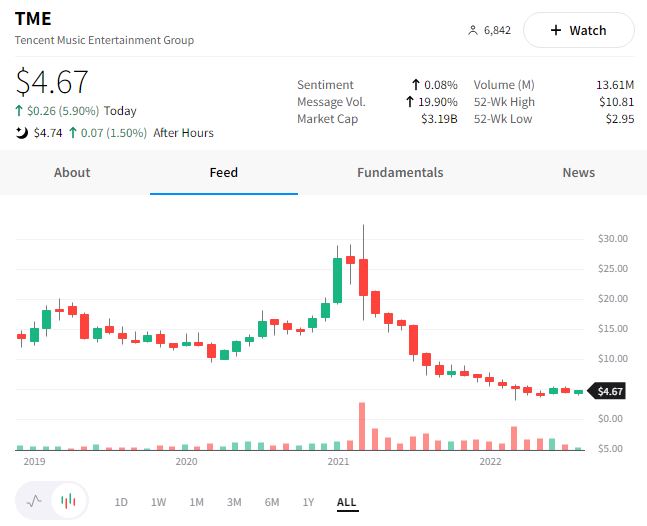 Keep track of all the earnings with the Stocktwits earnings calendar! 📆

📺 YouTube is planning an online store for streaming video services. The massive platform is building a system that would allow users to subscribe to various streaming services through the YouTube app, which could launch as early as this fall. This idea has become popular as platforms with massive audiences pitch themselves to streaming services as valuable marketing partners and infrastructure providers for their subscriptions. With an audience of over two billion people a month, YouTube may have one of the strongest cases of any channel store partner. The Verge has more.

🏘️ Wells Fargo pulls back hard from the mortgage business. Once the long-time leader in the mortgage market, the company continues to shrink its empire significantly. While they’re still debating internally about the details, reports are that it will start with paring back or even halting its correspondent mortgaging lending business, where it provides funding for loans arranged by outsiders. The firm has been riddled with scandals over the years and still has a long way to go in cleaning up its overall business. More from Financial Advisor Magazine.

⚔️ Battle between companies and unions continues. Starbucks is asking the federal labor board to suspend mail-in ballot union elections, citing alleged misconduct by the board’s personnel and its worker’s union during the voting process. The company also requests that all future elections be held in person so that regulators can investigate the allegations. As more and more workers successfully unionize by using the leverage of a tight labor market, legal battles continue to heat up as companies try to resist the change. CNBC has more.

🛒 Meta invests in a new startup that helps merchants sell via WhatsApp. It seems like no matter what app you’re using these days; someone is always selling you something. WhatsApp has become a core communication tool for businesses, and the company’s parent, Meta, has noticed. So in an effort to further monetize their platform, they’ve invested in a Singaporean startup called Take App, which helps businesses set up a simple website to facilitate online orders. More from TechCrunch.

🚴 SoulCycle closes 25% of its studios. As pandemic habits wear off and the economy begins to soften, higher-end exercise classes and equipment like Peloton are seeing significant slowdowns in demand. As a result, SoulCycle is right-sizing by closing a quarter of its stores and laying off 5% of its employees. Meanwhile, more affordable options like Planet Fitness are thriving as people cope with higher costs across the board. CNN has more.