It’s Thanksgiving week, so most of us have either taken off or will be pretending to work. But, real work or fake work, it’s important to be prepared. 📝

So let’s recap and look to the week ahead. 🦃

🛍️ We started the week with concerns over the holiday shopping season as Amazon and FedEx began layoffs/furloughs. Amazon stepped up its efforts on Wednesday, offering employees severance if they voluntarily resign by the end of November.

⚠️ The yield curve inversion continues to widen, showing the market is pricing in a U.S. recession.

👍 Meanwhile, retail earnings came in mixed but largely better than expected. Walmart, Home Depot, and Lowe’s managed to beat handily, while mall-related traditional retailers also rallied. Target did not fare well, with the company struggling to manage its business in the current environment.

👁️ Semiconductor stocks continue to report mixed results as investors look for signs that the cyclical industry could be bottoming.

🐦 Twitter remains in disarray as the company moves into “hardcore mode,” with about 25% of its 7,500 employees remaining.

🔥 Several names were on the Stocktwits trending tab for a good portion of the week, including $MMTLP, $SATX, $DWAC, $GLBL, and $XELA.

📱 Zuckerberg looks to WhatsApp to restart the company’s growth. At a company-wide meeting, the CEO reassured his employees that he doesn’t have tunnel vision on his long-term Metaverse bet. He noted that business messaging in the company’s WhatsApp and Messenger products was “probably going to be the next major pillar of our business.” The monetization of these globally-popular products is still in its early stages, leaving room for future growth. Gizmodo has more.

📝 Former SpaceX employees file a labor-law complaint. Eight employees allege that Elon Musk’s company unlawfully fired workers after they wrote a letter to company management asking them to publicly condemn the billionaire’s “harmful” behavior on social media. In addition, they allege SpaceX terminated their employment for participating in “concerted protected activities.” It will be interesting to see how this case plays out while the CEO is currently chopping employees left and right at his newly-acquired project, Twitter. More from CNN Business.

🌐 FCC unveils nutrition labels for broadband internet. Six years after the Federal Communications Commission formally proposed clear labels for internet providers’ confusing mix of plans, these “nutrition labels” are finally coming to life. The organization ordered U.S. internet service providers to adopt a label format that reports their typical speeds and latency, among other metrics. Large internet service providers will have six months to comply with the new rule, allowing those having less than 100k subscribers a whole year to meet the new standard. The Verge has more. 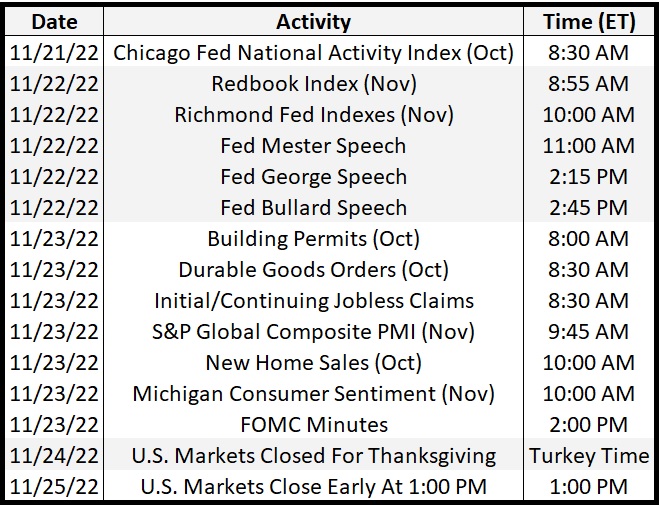 It’s a shortened week, with most U.S. economic data concentrated on Wednesday. In addition to the above, check out this week’s complete list of economic releases.

We’re past peak earnings season, with 85 companies reporting this week. Some tickers you may recognize are $ZM, $DELL, $BBY, $BIDU, $CSIQ, $DLTR, $DKS, $FUTU, and more.

📈 Black Friday Sale: Subscribe to IBD Digital for the lowest price ever—just $1 for an entire month*

🚗 The best and worst times to hit the road for Thanksgiving, according to AAA

🥶 ‘It’s like living in an igloo.’ People are turning off their heat as prices surge

💰 Get ready for bigger paychecks: Record high increases expected in 2023

Did We Just Witness A Bullish Slingshot?

What is a bullish slingshot, and why should we care? Today we’re looking at three tweets from Ryan Detrick of the Carson Group, who is making a bullish case for stocks.