Real quick: Take note of the main image above. The Litepaper is going live tomorrow night (September 22, 2022) at 8:30 PM EST on Instagram. Can’t wait to see you there!

Up. Down. Zip. Zap. Crash. Rally. Burn. Bam. Pamp. Damp. And everything in between.

The cryptocurrency market followed the broader stock market after the Fed’s interest rate decision came out as expected, 75 basis points.

We’ll take a look at some key technical levels to watch on the Total Market Cap’s weekly chart in today’s Litepaper, we’ll also see why USD Coin ($USD.X) is catching a lot of headlines, and last but not least a heads up on Cardano’s ($ADA.X) Vasil update happening tomorrow.

Ethereum’s ($ETH.X) Merge was, from a price action perspective, a nothing burger. Gas fees are still high, and scalability is still an issue. Shifting to Proof-of-Stake is a major, major deal – but not one that speculators were really excited about.

Cardano’s ($ADA.X) Vasil update has the opposite situation. It’s absent the major hype that Ethereum’s Merge got, and the final results of Vasil have immediate benefits. So what are the changes with the Vasil hard fork?

We could talk about diffusion pipelining as a method of boosting Cardano’s scaling and speed by addressing idle time… it’s over my head. Let’s keep it simple.

But overall  – the gist of the upgrade is Vasil makes the blockchain use less power, is faster, and is cheaper.

Also, the Litepaper got to sit down with the CMO of IOG (Input Output Group, Cardano’s developers) – so look out for that interview in a future Litepaper!

USDC Ya You Know Me

Most people in the crypto space are familiar with Tether ($USDT.X), but USD Coin ($USD.X) has made some big moves – off and on exchanges, that is.

Earlier this month, Binance ($BNB.X) announced they would begin auto-converting USD Coin, Pax Dollar, and True USD by September 29. The reason for this conversion is to enhance liquidity and reduce the number of trading pairs. The new stablecoin from Binance will be BUSD.

India’s largest cryptocurrency exchange, WazirX, followed Binance’s lead and will begin delisting USDC and instead use the new Binance stablecoin. Conversions will be at a 1:1 ratio.

While two major cryptocurrency exchanges have essentially removed UDSC, Robinhood ($HOOD) added it to their platform. Announced just yesterday, USDC is the first stablecoin listed on their platform.

Also interesting to note: Since March 2021, Visa ($V) allows the use of USDC to settle transactions on its network.

No easy way to say it, but the crypto market is sitting on a very precarious level. The Total Market Cap’s weekly chart really shows how close the market is to another big drop. 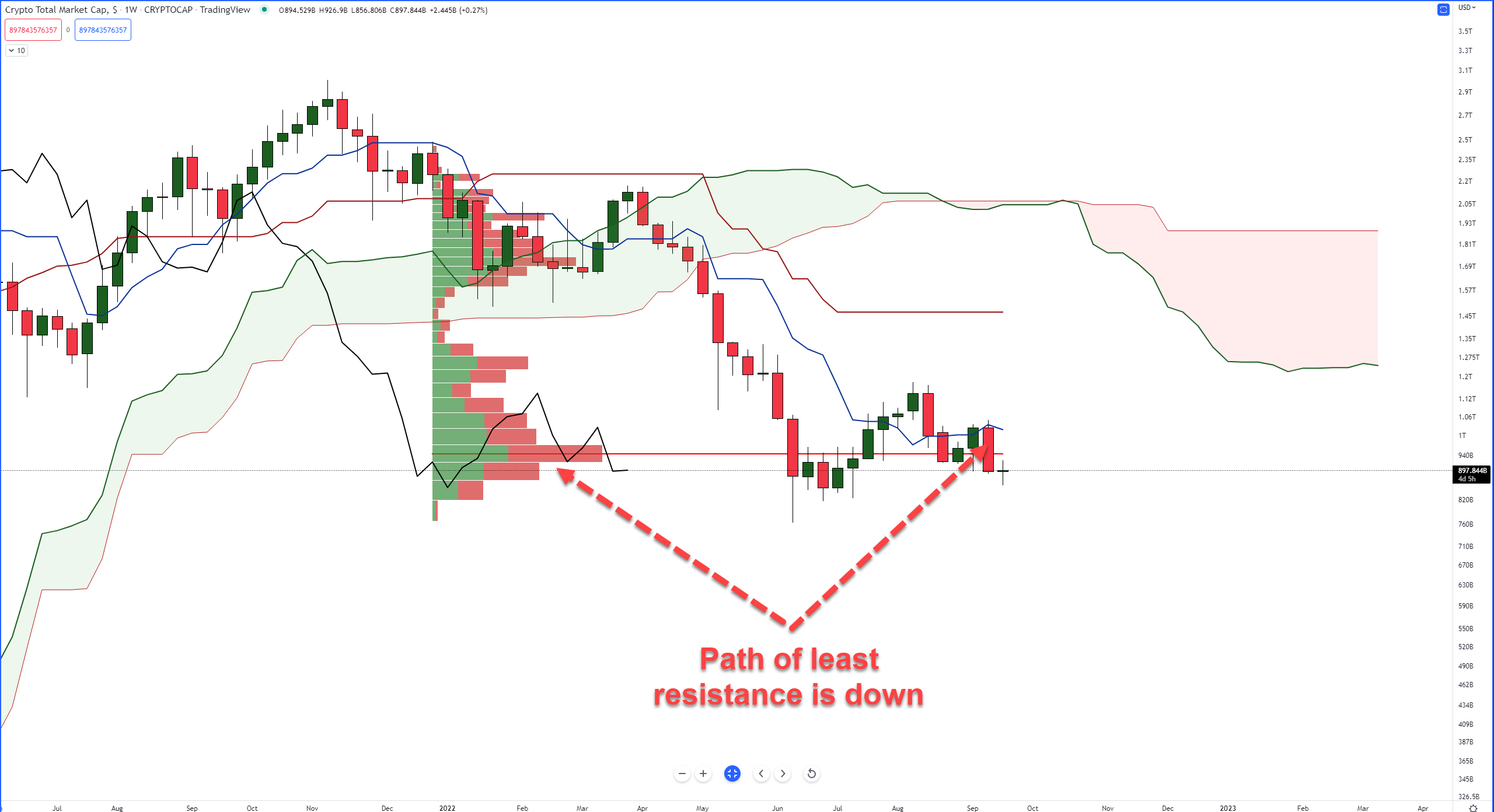 The Volume Point Of Control in the 2022 Volume Profile is $950 billion. The Total Market Cap is currently below that level, meaning it’s easier for price to move lower than higher.

From an Ichimoku perspective, the Total Market Cap chart is in a clear bear market. Last week’s candlestick showed clear rejection against any move above the Tenkan-Sen (blue moving average).

If you’re looking for any support on the weekly chart, it’s not there. The only hint that the market could give that any further downside pressure is likely to abate is a response to time cycles identified in previous Litepapers and a weekly close above the VPOC and Tenkan-Sen – at or above $1.03 trillion.

🧩 According to Kyber Network’s ($KNC.X) CEO Victor Tran, the marriage of TradFi (traditional finance) and DeFi (decentralized finance) is inevitable. Tran highlighted liquidity and transparency as primary motivators for traditional money and markets entering into the DeFi and crypto space. Full interview at Cointelegraph

🥞 Twitch streamer ItsSliker admitted to scamming friends, followers, and family for over $200,000 to pay off gambling debts. Users took to social and demanded Twitch ban or regulate gambling. As a result, Twitch announced a ban on all crypto gambling live streams. See the announcement here

🐎 Algorand ($ALGO.X)  just added a big TradFi corporate name to its executive roster. Former Communications Executive at Fidelity and Visa, Michele Quinaglie, was brought on as their CMO. Just another example of a professional in TradFi moving into the growing crypto and DeFi space. Full interview on Blockworks

☢️ LUNC Is Dangerously Close to Plunging to 0, Here’s Why

🦿 Vitalik argues why DAOs should shun the corporate approach

Has it been one crazy week or what? Never mind the Federal Reserve’s rate hike – have you looked at the FX (Foreign Currency) markets? It’s crazy. The British Pound is trading where it was against the USD back in 1985 – some of you weren’t even born yet!

What an ugly weekend it was for the cryptocurrency space. How bad was it? For leveraged longs on some of the non-regulated derivatives exchanges, pretty horrible. Like, $433 million in liquidations horrible.

The liquidation of so many long positions is almost the exact inverse of what happened to short sellers a couple of weeks ago. And from a price action perspective, the majority of the major market cap cryptocurrencies are still stuck in a range that’s existed since June – just a helluva lotta chop going on.

Ethereum ($ETH.X) is not moving in the direction many hoped it would post Merge, but it’s only Friday. Weekends are notoriously volatile for the crypto market, so watching how things move into Saturday and Sunday will be important.

And even though ETH had a big nose dive on Thursday, the remainder of the market performed much better. By better, I mean -2% to -3% lower on Thursday versus Ethereum’s -10%.  And unless something drastic happens before Monday, Ethereum could be positioning for another leg down.

Ethereum’s Merge Is Tonight! Why It’s A Big Deal

Yesterday was an ugly day for crypto, Bitcoin ($BTC.X) tanked nearly -10%, Ethereum ($ETH.X) -by 8%, and the Total Market Cap closed below the crucial $1 Trillion level. Today’s a little better, but most of yesterday’s losses remain. But the price action isn’t the focus of today’s Litepaper.

This Litepaper, depending on when you read it, likely found its way to your mailbox between 530 – 600 PM EST. In roughly 5 hours from that time, one of the most significant events in recent crypto history will occur:

Chatting With VanEck’s CEO About Crypto

The market today for crypto was a little mixed, and you’ll notice that in the performance table below. Bitcoin ($BTC.X) closed higher by nearly 3%, but Ethereum ($ETH.X) was down a little over -2%. Today’s big winner was Solana ($SOL.X), gaining more than 7% for the day.

Overall, the total market cap – due to Bitcoin’s performance – rose, but the altcoin market fell – due to Ethereum. Lots of ups and downs across the board.