Nifty and Sensex dropped 1% on fears of a faster than expected rise in US interest rates and rising Covid cases. Midcaps (+0.1%) and Smallcaps (+0.2%) fared better.

Zee Learn was locked in a 20% upper circuit amidst rumors of Byju’s acquiring a majority stake. The company clarified that the reports are baseless. 😧

Alembic Pharma received the US Food and Drug Administration (USFDA) approval for a new drug used to treat Parkinson’s. 💊 The stock closed flat.

Cryptos got KO-ed after the U.S. Federal Reserve pointed to a sooner than expected hike in interest rates. Bitcoin cracked 8%. Ethereum slipped 12%. Solana, Cardano and Doge tripped between 9%-12%. 😢

The Indian film industry is estimated to earn around Rs 2,000 cr during the first three months of 2022. Multiplex giant PVR initially expected the March quarter to be the biggest of FY22. Over 40 films were supposed to hit the screens in this quarter. But, a surge in fresh cases and increased restrictions may spoil the party for multiplex chain operators. 😔

Experts see the footfalls to theatres decline by 50%. Several states have asked theatres to close while others will have limited seating capacity. Also, many new releases may postpone or directly head to OTT platforms. Advantage Netflix/Hotstar/Zee. 🍿

Zupee’s games like Ludo Supreme and Ludo Turbo will be made available to all Jio and JioPhone users. 👊 The company claims its games have seen 70 million downloads. 😲 FYI: Reliance Jio is the largest mobile operator in India with over 420 million users. That’s a massive pan India reach Zupee wants to cash in on. Also, Zupee recently raised $102 million at a $600 million valuation in a Series B round. 💰

What’s in it for Jio? Like most telecom and tech companies across the globe, Jio is also tapping the services market. The service business has created a recurring revenue stream for platform companies. 💸 Jio Games is one of the crucial elements of its services business. 🎮

It has tied up with numerous gaming companies including Japanese giant SEGA in the past year. Jio Games has over 100 games in its portfolio. It is available to its users for no added charge, but you can expect that to change in the coming months. FYI – the additional revenue stream will help Jio offset any weakness in its wireless business. 🤑 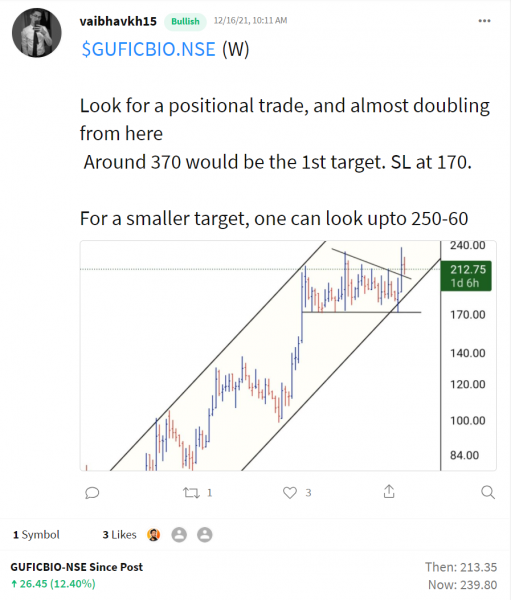 Vaibhav Khandelwal shared this trade idea on Stocktwits. The stock is up 13% since Vaibhav posted the idea in December. Add $GUFICBIO.NSE to your watchlist and follow Vaibhav for his latest market thoughts.

Fractal’s majority shareholder Apax Partners sold a partial stake, but will remain a majority shareholder. The transaction is expected to close by the first quarter of 2022. Fractal will use the funds to scale up its product portfolio and pursue acquisitions. 🛒

Fractal acquired 5 companies including Samya.AI and Zerogons for around $100 million in 2021. They plan to continue a similar acquisition strategy in 2022. Also, they’re targeting revenue of $190 million in FY22. 💵

Founded in 2000, Fractal offers AI and analytics solutions to Fortune 500 companies like Google and Wells Fargo. Their customers are looking to accelerate digitisation and offer more personalised solutions to their customers. They employ 3,500 people across 16 countries. 👊

🥶 Could Being Cold Actually Be Good for You?