Hey, guys. Markets closed down for a second straight week. 🤕

Rupee hit yet another record low of Rs 81.23 against the US dollar. 🔻

Under one roof. All metal companies of the Tata Group will merge with Tata Steel. More details below. 👨‍👩‍👧‍👦

Paytm may still be a “value” buy after rallying +35% from its June lows. Find out more below. 🤑

M&M Finance tanked over 14% intraday after the Reserve Bank of India (RBI) banned them from using 3rd party recovery agents. M&M Finance clarified that the RBI order would not have a material impact on its operations however, the damage was done by then. 💥

Hospital stocks were under pressure after The Competition Commission of India (CCI) found them guilty of overpricing. Aster DM Healthcare, Kovai Medical Center and Apollo Hospital were down 3%-4% each. 👨‍⚖️

Saksoft fell over 6% after turning ex-split. Shareholders will now have 10 shares for every one share held. ✂️

Powergrid crashed over 8% on reports that it may acquire state-run power financier Rural Electrification of India (REC). 👎

Biocon’s (-2%) Malaysian unit received 6 negative observations from the US Food and Drug Administration. 🚨

Cryptos traded mixed. Bitcoin was down half a per cent. Ethereum rose +2%. Ripple rallied ~18% on hopes of a positive outcome in its legal battle with the US Securities and Exchange Commission (SEC). 💯

The Tata Group, in its latest attempt to simplify its ginormous corporate structure, has announced the merger of 7 of its metal companies with Tata Steel. 🤝

The merger will help streamline operations, improve profitability and reduce risks. The consolidation of the downstream operations will enable growth in value-added segments, which is a positive. Tata Steel would save Rs 1,500 cr per year in costs like raw material procurement, inventory management and logistics. The move will be EPS accretive and unlock value for all stakeholders, the company said. 💰

Here’s a quick look at who gets what: Tata Steel will allot 67 shares for every 10 shares of Tata Steel Long Products. This is called a share swap ratio and is read as 67:10. Similarly, the share swap ratio for the rest of the companies is as follows – 17:10 for TRF, 33:10 for Tinplate and 79:10 for Tata Metaliks. 🤓

The Tata Group has been working on simplifying its corporate structure under the leadership of N. Chandrasekaran. Earlier this year, they announced the merger of Tata Consumer Products and Tata Coffee. Bro tip: markets love a lean, mean and green company. 💪

Paytm is up +35% from its June lows but it still offers insane value, according to global brokerage firm Goldman Sachs. 🚀

What’s the deal bro? Goldman says Paytm can deliver over 50% topline growth over the next few quarters as it evolves from a payment’s first business to a diversified financial services giant. FYI – Paytm has been killing it on the business front. In Q1, they gave out more loans (85 lakh) than Bajaj Finance while average Monthly Transacting Users (MTUs) rose 49% YoY to a record 7.5 cr. 📊

Goldman says Paytm’s current valuations factor in zero sales from the Buy Now Pay Later (BNPL) segment, halving of commission/fee income, and no operating profitability until FY27! For context, Paytm claims it will turn EBITDA breakeven aka no profit no loss by Q2FY24. At 3.6x EV-to-Sales, the stock trades at a 30% discount to the rest of the internet-based companies, they added. Goldman believes the pessimism may be overdone and hence see great value even at current levels. They have a target of Rs 1,100 per share, indicating +60% upside. 💰

Having said that, the 1-year lock-in period for pre-IPO investors comes to an end in November which may drive selling pressure. Remember, what happened to Zomato, guys? Also, fears of high-interest rates impacting credit growth plus regulatory changes remain key concerns. 👀

Here’s a look at this week’s top Nifty500 movers. Shree Renuka Sugar took the pole position after rallying +18%.🏅Sterling and Wilson Solar (+16%) had the best week since August 2021. Canfin Homes tanked 19% following the sudden exit of its MD & CEO. PowerGrid (-14%) hit a 7-month low. 📉 Check out their charts below: 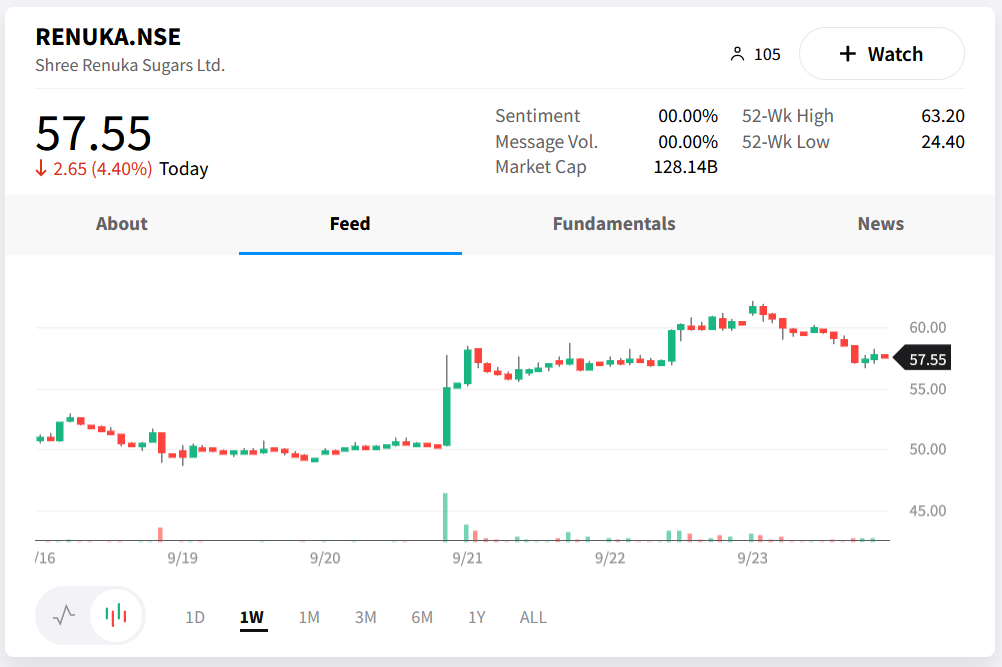 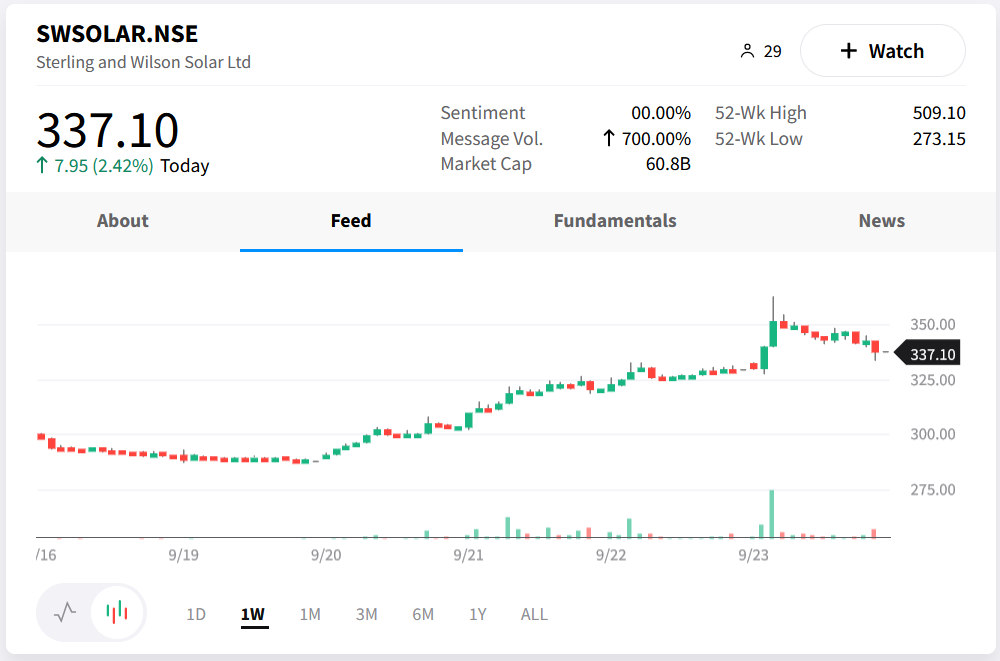 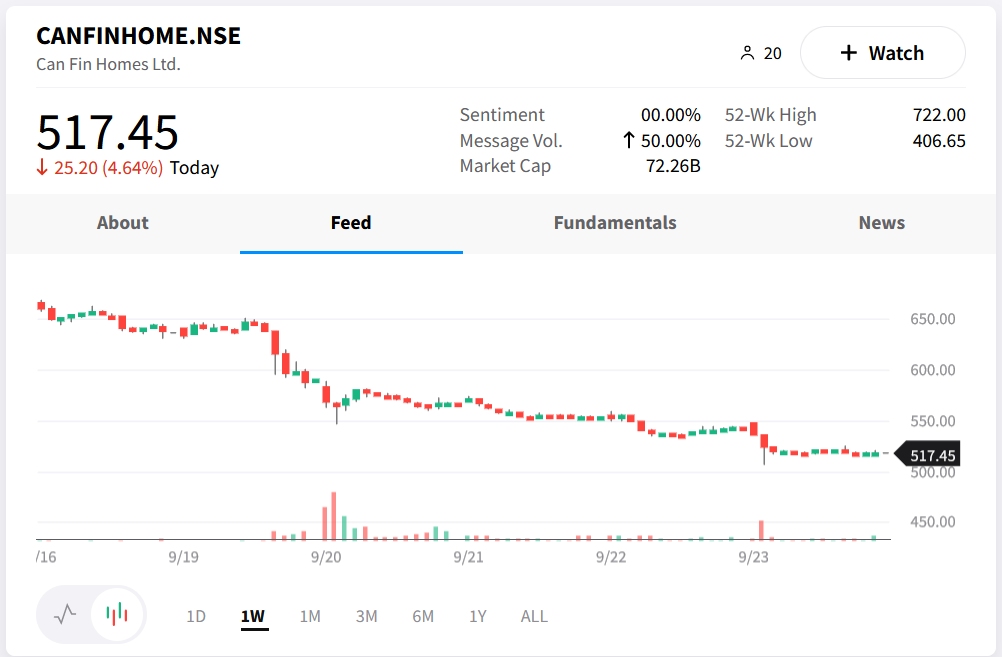 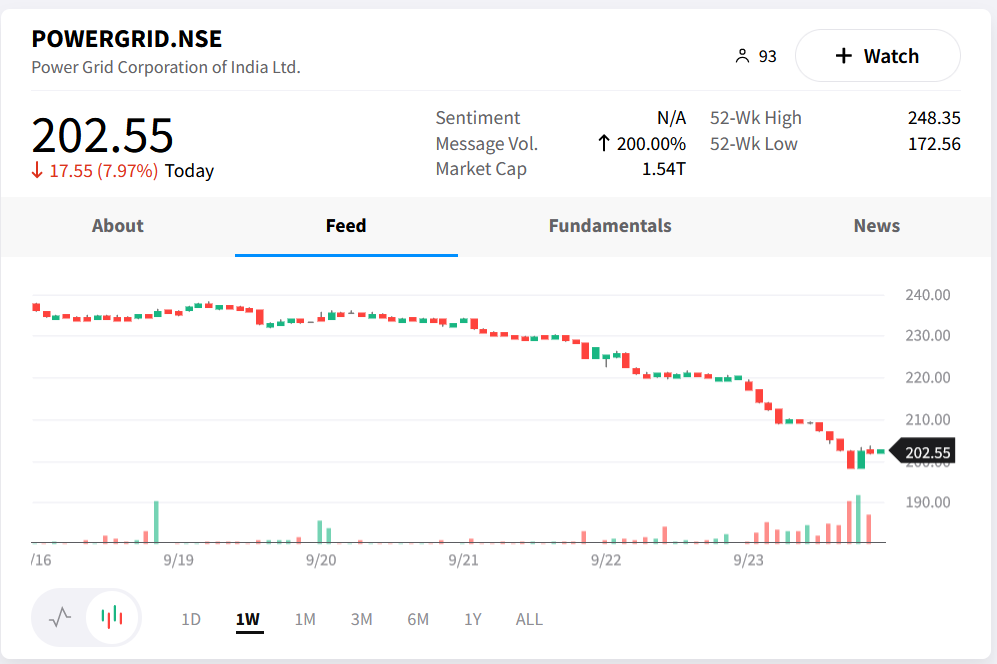 😇 Microsoft says these 2 things will stop Gen Z and millennials from saying: ‘I quit’

👏 24-YO Builds India’s First DIY Neuroscience Kit For All Ages, Sells Across 22 Countries

🏏 With series on the line, India aim to tighten bowling screws

🥗 Eat Better: How To Dine Out Healthily

Markets ended lower for a third straight week despite today’s big up move. Nifty and Sensex jumped ~2% each. Midcaps and Smallcaps also moved in tandem, up +1.5% each. The market breadth was extremely positive with three stocks gaining for every one loser. 💪

Hey, guys. Markets closed down for a 7th straight day, the longest losing streak since Feb 24. 🚨

Nifty and Sensex went belly up after opening higher. Monthly F&O expiry and uncertainty ahead of the RBI policy meeting dented investor sentiment. Midcaps (+0.4%) and Smallcaps (+0.6%) continued to outperform. The advance-decline ratio was split evenly. ✌️

Six In A Row

Nifty and Sensex cooled off sharply in the afternoon trade to end near the day’s low. Midcaps (-0.3%) and Smallcaps (-0.5%) also moved in sync. The market breadth was weak with over two stocks falling for every one gainer. 🚨

Nifty and Sensex cooled off from the day’s high to end with minor cuts. Midcaps (+0.2%) and Small Caps (+0.3%) fared slightly better. The advance-decline ratio was split evenly. 🤼

Good evening and welcome back to The Daily Rip! 🤗

Markets closed down for a fourth straight day. Nervousness ahead of the RBI policy meeting, geopolitical tensions and a weak rupee crushed investor sentiment. Midcaps (-3.1%) and Smallcaps (-3.5%) got smoked. 🔥

With bellwether companies like FedEx and Target missing earnings, investors can add Nike to their list of disappointments.

Today, September 28, 2022, is an important date from a Gann Analysis perspective. It is the final date in a massive cluster of time cycles that began on September 19 and culminated today. What does that mean? It means there is a high probability of a very powerful move and trending move beginning anytime between now and October 5.