Crocs on the Rise 🐊

Welcome back, ladies and gentlemen, to another Daily Rip. 👏 👏

The major indexes gave back all of yesterday’s gains and then some. The Nasdaq closed negative for the fifth straight session.

Crocs climbed 8.5% to new highs today after the company unveiled a new bio-based shoe in an effort to decrease its carbon footprint. $CROX expects revenue to exceed $5 billion by 2026. More on this below. 🐊 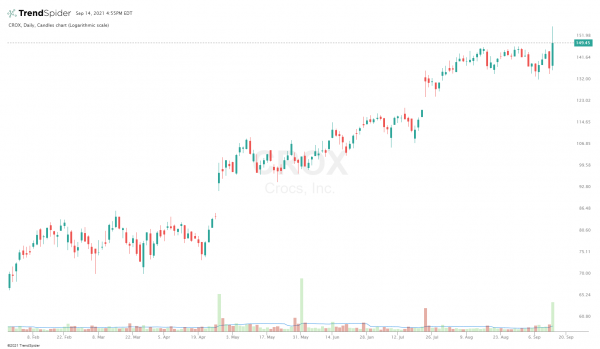 Apple launched its fall product presentation with an announcement about its latest slate of products. $AAPL released a new iPad/iPad mini, Apple Watch Series 7, and the iPhone 13. Here’s the press release.

Apple spent the afternoon rolling out the red carpet for its swath of new products. 🎬 🌟

Apple announced a new iPad, iPad Mini, iWatch, and four new iPhones during a 77-minute keynote held this afternoon. All of the devices featured some meaningful hardware upgrades. The best part? None of the devices saw significant increases in price, which was an imminent concern given ongoing shortages. 👏

All four phones run on the backbone of Apple’s new A15 Bionic chip, which Apple claims is the “fastest chip ever in a smartphone.” The high-end Pro and Pro Max have an even-stronger version of the A15 than the midrange phones. All phones will be available for preorder starting this Friday, with shipping beginning on Sept. 24.

Inflation is cooling off according to the U.S’s inflation indicator, the consumer price index (CPI.) ❄️

The CPI rose 0.3% month-over-month in August, a slightly lower figure than economists expected. The figure was up 5.3% year-over-year, which is definitely higher than inflation numbers from prior years. However, inflation’s recent rise seems to be tapering off — an indication that the worst could be over.

Energy and food accounted for most of last month’s rises, with energy costs up 2%. Gasoline prices rose 2.8%, which happened in-part as a result of disruptions to oil-producing activity in the Gulf. The EIA’s most recent report from Sept. 9 indicated that Hurricane Ida shut down “96% of the crude oil production and 94% of the natural gas production in the … Gulf.” The report also stated that “significant levels of refining … and production remain shut in”  as of now.

If you take food and energy out of the equation (two of the more volatile categories), then America’s inflation indicator only jumped 0.1% for the month (compared to 0.3% estimated.) The Fed stands behind its former comments that inflation will fade after shortages and supply chain woes subside. 📉

Google Gets With It (With NFTs, That Is.)

Google is the latest giant company to join the NFT mania. Today, the tech giant teamed up with Canadian blockchain studio Dapper Labs, creator of the Flow blockchain, and NFT marketplaces like NBA Top Shot.

This multi-year partnership focuses on the development of Web 3.0 products, including non-fungible tokens. With this partnership, Google Cloud will serve as a network operator and Dapper Labs will use Google’s cloud services to scale its in-house blockchain, FLOW. FLOW blockchain currently supports applications like NBA Top Shot (a marketplace where fans can buy, sell, and trade NBA moments), CryptoKitties (a blockchain game), and more.

Dapper Labs is among the most successful companies investing in the NFT boom. Dapper generated almost $700 million in sales this year. 🤑 💸 The company reportedly plans to launch a global version of digital video highlight collectibles for La Liga — Spain’s first division soccer which includes teams like Barcelona and Real Madrid.

Recognizing the potential of NFTs, Google has entered the blockchain ecosystem. The tech giant has demonstrated interest in cryptocurrencies from time to time, but it’s somewhat late to the party. Microsoft offered its cloud infrastructure to blockchains in 2015 and Amazon launched a similar service in 2019.

Anyway, Google’s deal tells us two things: first, that NFTs are far from dead. And second, that the battle for Web 3.0 dominance is quickly heating up. 🔥🚀

Your favorite rubber shoes from childhood are back and better than ever. $CROX stock skyrocketed to all-time highs today after the company disclosed its expectations for future revenue growth. 🐊 🚀

By 2026, Crocs expects to make over $5 billion in annual revenue — that’s over a 17% growth rate for the next four years. The company made over $2.27 billion in sales this year.

The ‘rubber clog-maker’ has hugely benefited from style trends arising during the COVID-19 pandemic, especially as consumer demand shifted towards comfier stuff. Not only that, Crocs X Justin Bieber, Crocs X Bad Bunny, and other celebrity collaborations (in addition to endorsements by healthcare workers) have boosted the company’s profile.

Like Adidas and Lululemon, Colorado-based Crocs has increased its use of air freight to battle overseas manufacturing issues. Crocs also intends to advance its share repurchase program.

Stocks bounced today – the Russell 2000 ripped 1.48%, adding to yesterday’s gains. The Dow and Nasdaq both increased 1% or more.

Good evening, everyone. We hope your Tuesday was amazing. ✨

Is It China’s ‘Lehman’ Moment?

All indexes closed deep in the red – the S&P 500 and Dow both fell 1.7% while the Nasdaq and Russell 2000 decreased by more than 2.2%. More China drama (this time related to the country’s real estate market) smashed the global crypto market. 🔨 📉

The Weekend Rip: The September Slump

Happy Sunday, everybody! We hope you’re enjoying a sunny conclusion to your week.✨

Indexes were 1/4 this week. The Russell 2000 was the only index in the green. Huh, that never happens!

It looks like it’s fair to call this a September Slump or Snail Stock September. Stocks have notched two straight weeks of losses. Maybe there will be more to look forward to in October. 😎

Good evening, everyone. Welcome to the Stocktwits Top 25 Newsletter for Week 37 in 2021.

Here are your Stocktwits Top 25 Lists for Week 37: