Tesla has been tearing it up lately 💪 – $TSLA ran up 3.2%, gaining steam ahead of its earnings on Wednesday. 😤 Here’s the daily chart: 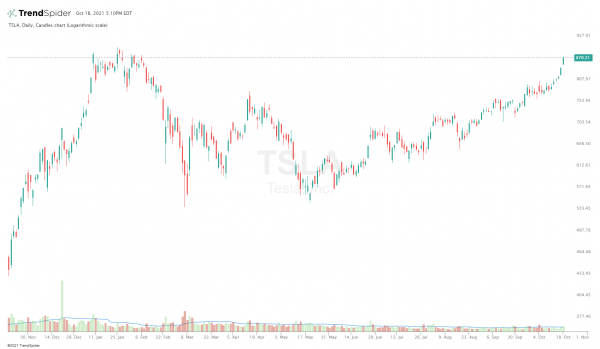 Apple released new Airpods, MacBooks, colors for the HomePod Mini, and processors at its second event of the season today. 👏 Here’s the full video. $AAPL advanced 1.18%.

Tuesday marks the opening of trading for the first-ever bitcoin futures ETF. 🥳 The ProShares ETF will trade in bitcoin futures contracts rather than owning actual cryptocurrency. $BTC.X traded flat today.

Just weeks after announcing a swath of new iPhone and iPad products, Apple got back on the stage today to announce a few more things. 😊 The company just released new Airpods, MacBook Pros, and HomePod devices.

The company’s biggest announcement today involved its long-running MacBook Pro series, which have been “completely reimagined,” according to Apple. The laptops will retail starting at $1,999.

The new high-end laptop will run on Apple’s next-gen M1 Pro silicon, a 10-core CPU which is “70% faster than its current M1 chip.”  Apple also announced the M1 Max, which will be a higher-end version of the MacBook Pro. It’s even faster than the M1 Pro (which is already stupid fast. 🤭) In fact, Apple calls its latest chips the “most powerful chips“ the company’s ever built.

Apple also rolled out the red carpet for new AirPods, which will sport a new design, spatial audio, and wireless charging. They’ll have six hours of battery life and “more powerful bass” than previous models. 🎶 The third-generation AirPods will retail at $179. The entry-level ones will get a price bump to $129.

Naturally, there were a few other things Apple talked up today: a $99 smart speaker called the HomePod Mini and a pretty strange $4.99 “voice plan” for Apple Music. If you’re interested, check out the extended summary from Wall Street Journal. 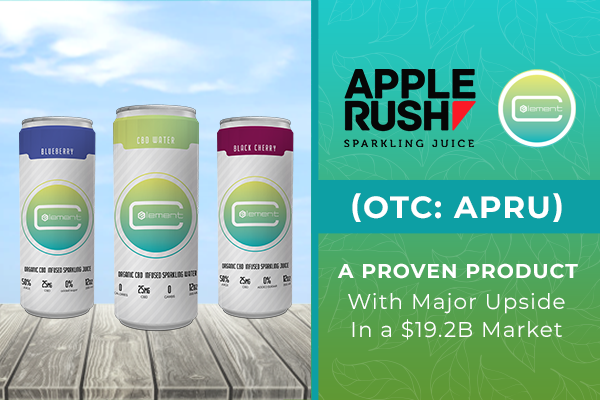 The first bitcoin-linked exchange-traded fund (ETF) will make its debut tomorrow. 😁 🎉 The much-anticipated ETF from ProShares will track the bitcoin futures market — look out for “BITO” on the NYSE.

“We believe a multitude of investors have been eagerly awaiting the launch of a bitcoin-linked ETF after years of efforts to launch one,” ProShares CEO Michael L. Sapir said in a statement.

Bitcoin-specific ETFs will give investors a new way to invest in the crypto market. Futures reduce risks and provide investors with greater exposure and tax benefits. 👏 However, futures ETFs do have some downsides.

ProShares filed for its Bitcoin Strategy ETF over the summer. The fund will track bitcoin futures traded on the Chicago Mercantile Exchange. The futures ETF strategy emerged as an olive branch to a traditional Bitcoin ETF because the SEC isn’t quite ready yet for a regular crypto ETF.

Some are calling the ETF a major historical milestone for bitcoin. However, some skeptics are still unsure if the ETF will boost the value of the largest cryptocurrency. $BTC.X rose 2% today; it was a mild day for the crypto market. 🤷

Have you watched Squid Game yet? If not, you might want to check it out because the show’s living up to the hype — an internal Netflix document said that Squid Game will generate about $900 million in “impact value” for the streaming service. 🤯 💰

The show is Netflix’s most-watched series ever. In its first month, a record of over 111 million viewers watched. Squid Game isn’t just good, it’s also cost-efficient: each episode only cost $2.4 million to make and the entire series cost a grand total of $21.4 million. Cha chiiiing. 🤑

In case you haven’t already jumped on the Squid Game bandwagon, the show is a dystopian survival drama produced by Korean director Hwang Dong-Hyuk. It follows 456 contestants as they play different children’s games for a chance to win a $38.5 million prize. If you lose the games, however, you face deadly penalties. 💀

So far, over 1.4 billion hours of Squid Game have been watched worldwide. For comparison, the average human life is only about 635,000 hours. Get that popcorn ready. 😅 🍿

The news comes just days before Tesla is set to announce earnings — Tesla’s numbers are expected to be beefy this quarter (and we’ll be covering them in the Rip later this week.)

At the end of Q2 2021, Burry owned more than 1.07 million puts contracts in Tesla. The contracts’ cumulative value was worth over $731 million, according to Fintel. 💰 💰

Burry (of “The Big Short” fame) is credited with predicting the housing crash in ’08. However, he has more than his fair share of incorrect bets, and Tesla might end up being one of the costlier ones.

🏀 NBA Projects $10 Billion in Revenue as Audiences Return after COVID

🤖 Facebook Is Hiring 10,000 People in Europe to Build a Massive Metaverse