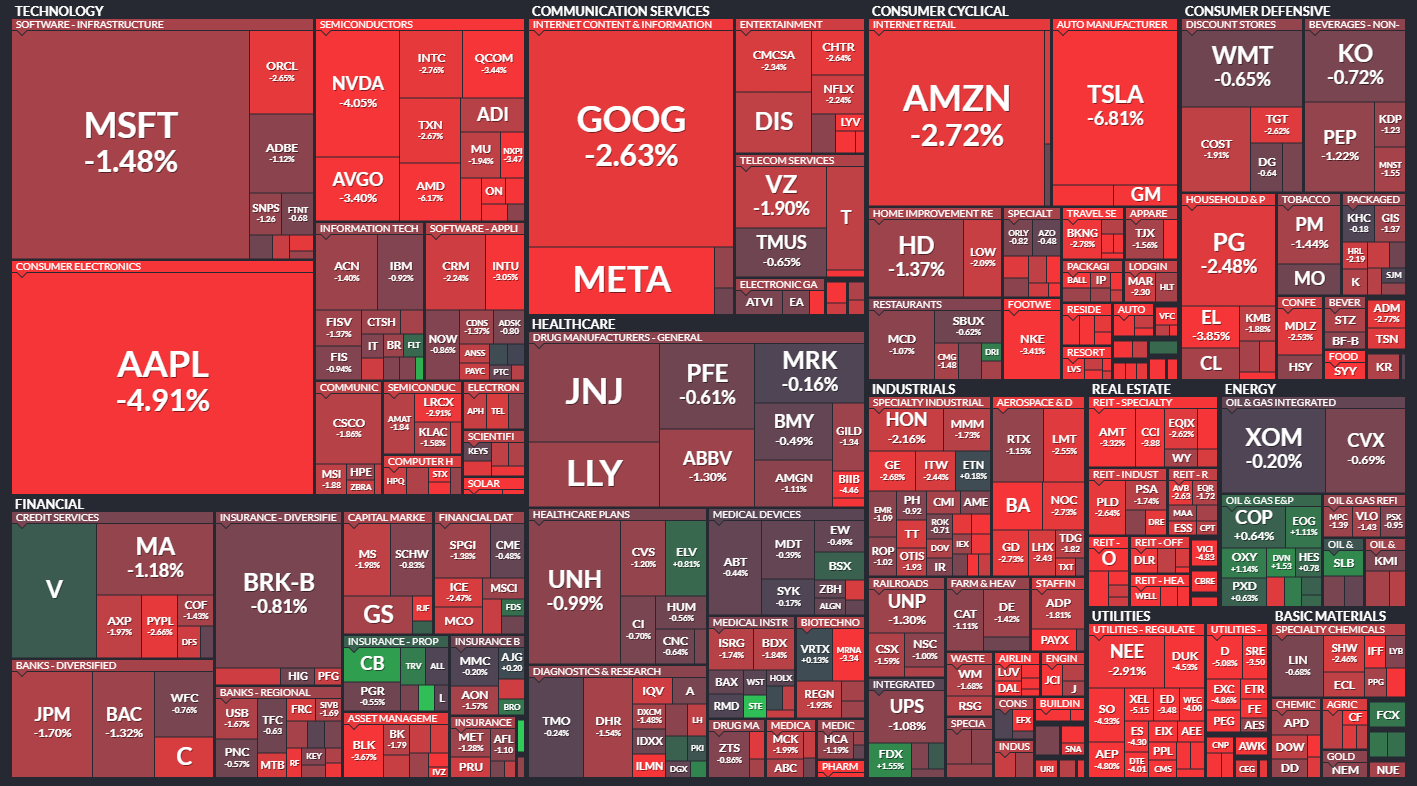 In U.S. economic news, the final Q2 GDP reading was unrevised at -0.60%, and initial jobless claims hit a five-month low. Internationally, things remain tense as many expect Russia to annex more of Ukraine on Friday. 🗺️

Despite the challenging market environment, Porsche pulled off a historic $72 billion public listing in Germany. 💰

Bed Bath & Beyond shares fell 4% after reporting a 28% decline in quarterly sales and a wider-than-projected loss. 📉

A Stock In Dire Need Of The Right Aid

The drugstore chain reported adjusted earnings per share loss of $0.63, below the $0.50 expected. Meanwhile, revenue fell about $200 million YoY to $5.901 billion.

Where the company faced trouble was its outlook. It stuck with its fiscal 2023 revenue guidance but forecasted a larger-than-expected loss of $477.30-$520.30 million. Additionally, its same-store sales disappointed, growing just 0.3% on an inflation-adjusted basis. 👎

As is usually the case, a business struggling during the good times is likely to perform poorly in the bad times. And that’s what we’re seeing here as it faces continued pressure on consumer spending and supply chain challenges.

Who knows what can save the company, but it’s certainly in need of some aid as its stock approaches a new all-time low. 📉 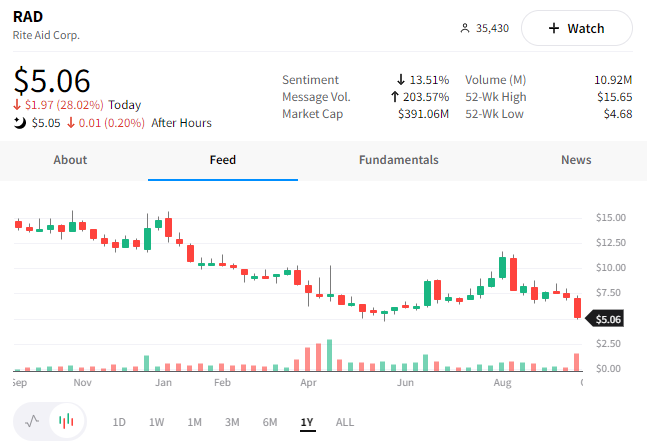 According to a recent ground-breaking Goldman Sachs report, a US recession could cause the S&P 500 to freefall an additional 14% by year-end.

That’s why the financial experts at Hidden Wealth are focused on finding “hidden gems” outside of traditional markets.

Their latest find could be totally different from anything you’ve seen before.

By a platform that’s averaging a net return of 29%*, across six separate exits.

*Past returns are no guarantee of future results. See important Regulation A disclosures.

**3rd Party Ad. Not an offer or recommendation by Stocktwits. See disclosure here.

Get the Full Story Here

With bellwether companies like FedEx and Target missing earnings, investors can add Nike to their list of disappointments.

With that said, its forward guidance is what’s getting it put in the dog house. The company says supply chain headwinds like rising shipping costs and times have caused its inventory levels to swell significantly during the quarter. While this was partially offset by strong demand, concerns over its sales channels remain.

The largest part of Nike’s business is wholesale, which only saw a 1% increase. Meanwhile, its direct sales grew by 8%, and its digital-brand sales rose by 16%.

As expected, shutdowns in the Greater China region caused a sales decline of 16%. So although conditions in China are improving, there’s still a lot of uncertainty around its business there. And with the U.S. economy looking like it’s going to get worse before it gets better, some analysts have concerns over demand in North America. 😬

In the short-term, bearish investors are shipping the stock back, sending shares down another 10% after hours. Meanwhile, the bulls argue that the stock is already down more than 50% and that much of the bad news is already baked in.

Given the current market and economic environment, bears feel like they still have the upper hand. However, we’ll have to see what the rest of the week and next quarter bring for $NKE. 🤷 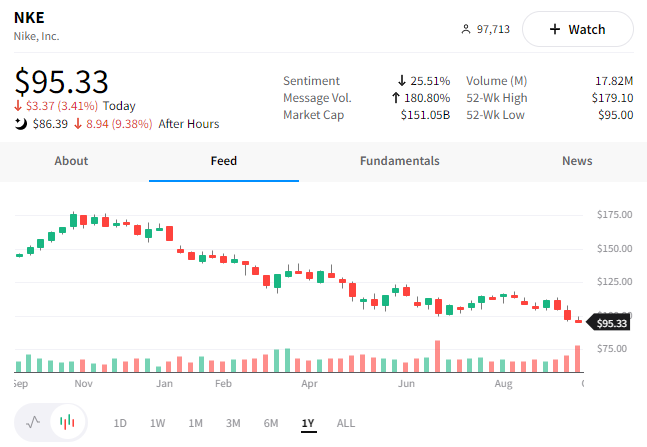 Like in housing, the used car market faces an affordability crunch. Record-high prices, rising interest rates, and an uncertain economy have led to a steep decline in demand.

With the Federal Reserve waging war on demand and prices, things don’t look great for CarMax and the used car industry. As a result, competitors like Carvana (-19.73%) and Penske (-9.16%) fell in sympathy throughout the day. 📉 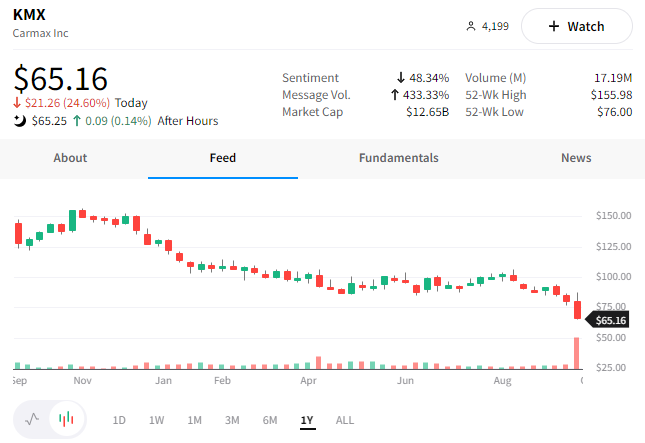 💵 China Yuan-ts its state banks to sell Dollars. The country has asked major state-owned banks to be prepared to sell dollars for the local unit in offshore markets to help stem the yuan’s decline. In addition, state banks were told to ask their offshore branches to review their offshore yuan holdings and ensure they have enough U.S. dollar reserves to deploy. The Chinese currency is down 11% vs. the Dollar, its biggest annual loss since 1994 when China unified its official and market rates. It hopes that selling dollars and buying yuan can help form a floor under the currency. Reuters has more.

🤔 What the fund is going on in the U.K.? Pension funds were in a panic after losing a significant portion of their value when U.K. government bond yields soared. Rumors are this panic was a primary reason for the Bank of England to step in and try to stabilize the market. While the connection is a bit confusing, essentially, the pension funds hold a lot of their assets in liquid long-dated bonds. But when the prices of those bonds become unstable, there’s a risk that the funds themselves can become insolvent (unable to meet their liabilities). More from CNBC.

⚔️ The executives of top companies are fighting back against ESG. There’s not a lot of love for the Securities and Exchange Commission’s environmental, social, and governance standards disclosure proposal. Only 25% of CFOs surveyed by CNBC say they support it, while those surveys are more likely than not to support the moves by Texas and Florida to ban pension funds from investing based on ESG factors. CNBC has more.