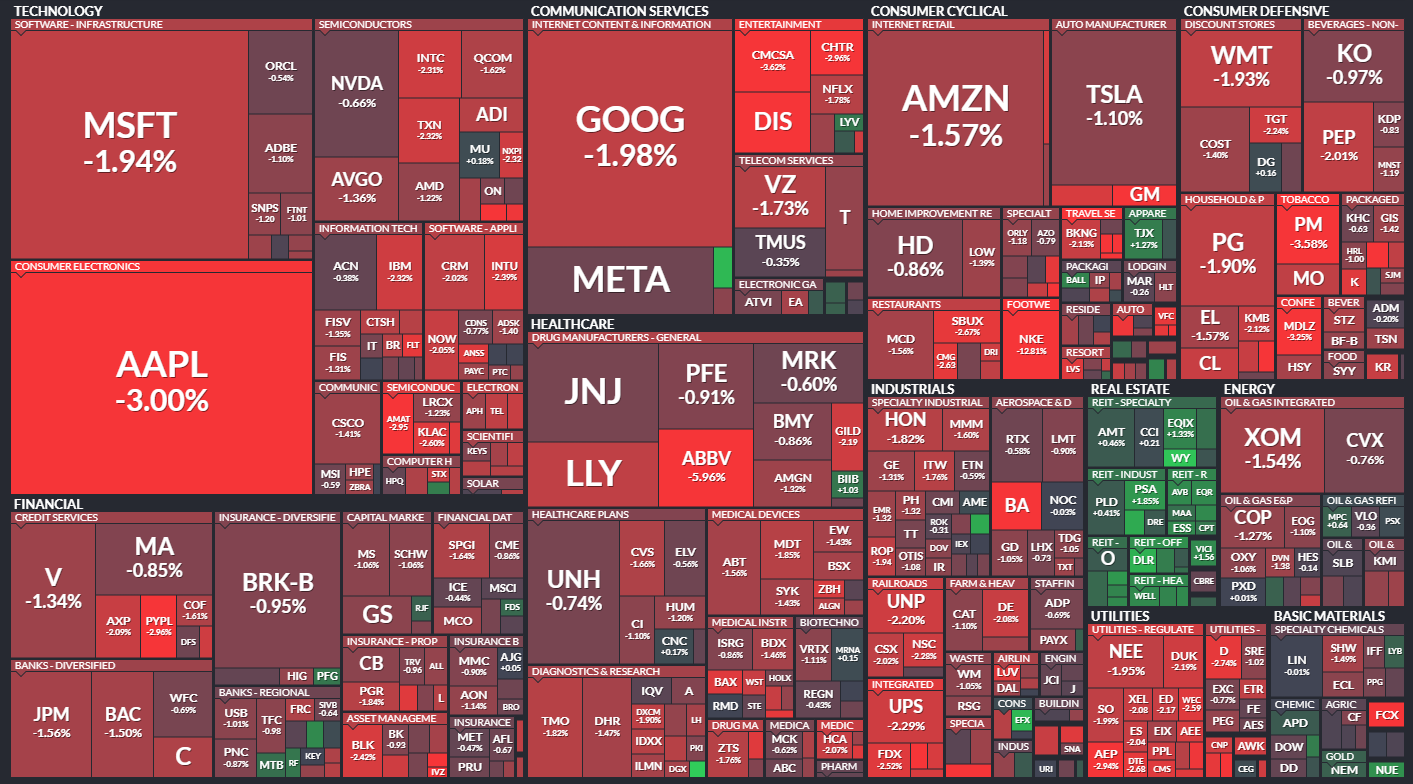 In global news, the Reserve Bank of India raised rates by 50 bps and outlined expectations for more hikes ahead. Meanwhile, a defiant Putin proclaims Ukrainian annexation and vows war win. The U.S. responded with a new round of sanctions against Russia. Lastly, China’s factory and services surveys suggest its economy is struggling to rebound. 🗺️

Disney reached a deal with activist investor Third Point, adding former Meta executive Carolyn Everson to its board of directors. The company also named Alisa Bowen as president of Disney+ as it prepares to launch an ad-supported tier. 🤝

Shares of Apple remain under pressure following the company’s iPhone production news and a slew of analyst downgrades. 🍎

In crypto news, court records show FTX is paying $51 million in cash for Voyager Digital’s assets. Professional services firm Ernst & Young wants to be “the best on earth at Ethereum.” And CFTC Chairman Rostin Behnam argued that Bitcoin could ‘double in price’ under CFTC regulation. ₿

Inflation Remains The “Core” Of The Problem

This data has been volatile over the summer but had made downward progress since March, that is until now. 😮‍💨 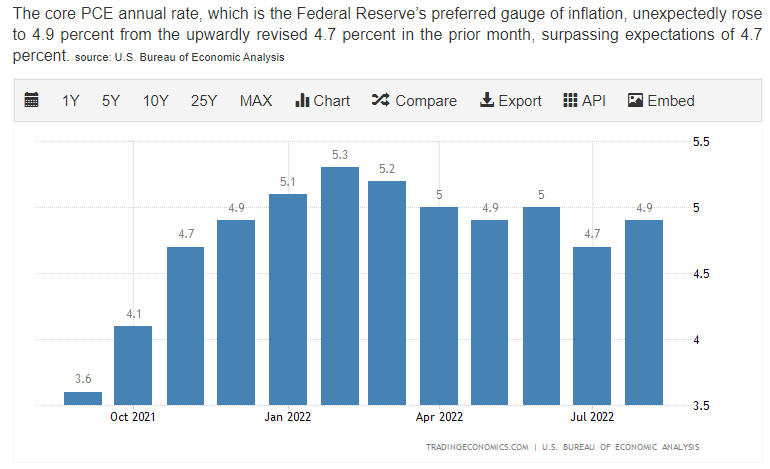 The Fed prefers this measure as the broadest indicator of where prices are heading as it adjusts for consumer behavior. So far this year, readings have remained elevated well above the central bank’s long-run target of 2%.

Despite Powell waging a war on inflation, many inflation pressures remain. Personal income rose 0.3% in August, and spending rose 0.4%, showing that consumers continue to spend (though they’re getting less for their money). Housing has slowed, but prices haven’t come down meaningfully. And the job market remains hot hot hot. 🔥

Over the last few weeks, the market has begun to accept the fact that the Fed will continue tightening aggressively. The progress it’s seen in bringing down prices has not been great. While we may have seen peak inflation, what we haven’t seen is meaningful progress back towards 2%.

That is what’s keeping the Fed in tightening mode and the market in freakout mode. 😱

There were some other economic data points today, but none that really moved the needle. You can check them out here: Chicago PMI, Quarterly Grain Stocks, and Michigan Consumer Sentiment.

Shares Sink After Carnival Warns Of “Storm Ahead”

The three separate share listings of Carnival Corp. were all sent off course today. 🧭

Before we discuss their unorthodox corporate structure, let’s talk about the earnings miss and poor forecast that’s causing investors to abandon ship. 🏃

It’s been a long quarter, and there’s a lot of data to analyze, but let’s take a quick look and see how things shook out in Q3. 👁️👁️

The Finviz quarterly performance graph shows that there weren’t many places to hide your money. Almost every major asset was down, but bonds and economically-sensitive commodities like oil and lumber fell the most. Meanwhile, the U.S. Dollar, volatility index, and some obscure commodities like Palladium, Orange Juice, and Live Cattle held up well. 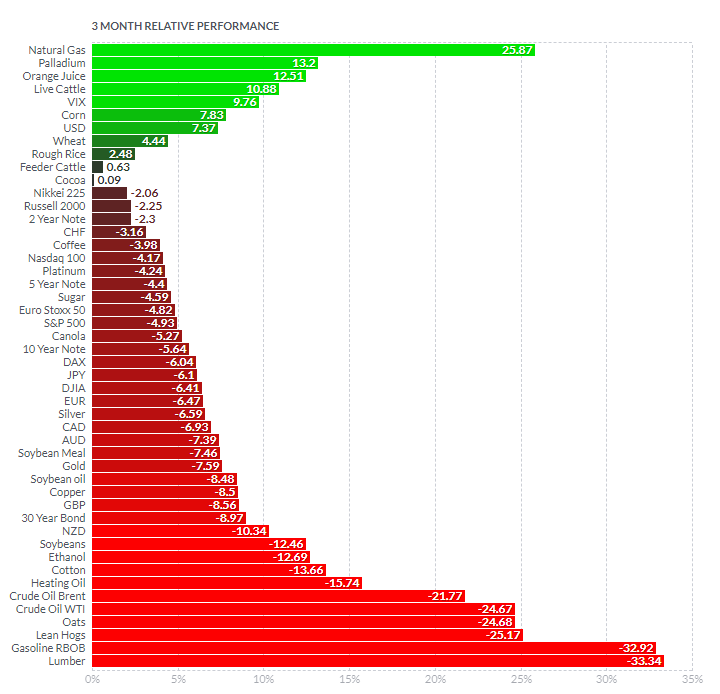 Consumer Discretionary and Energy managed to eke out gains at the sector level. While the other nine sectors all lost value, led by communication services and real estate. 📉 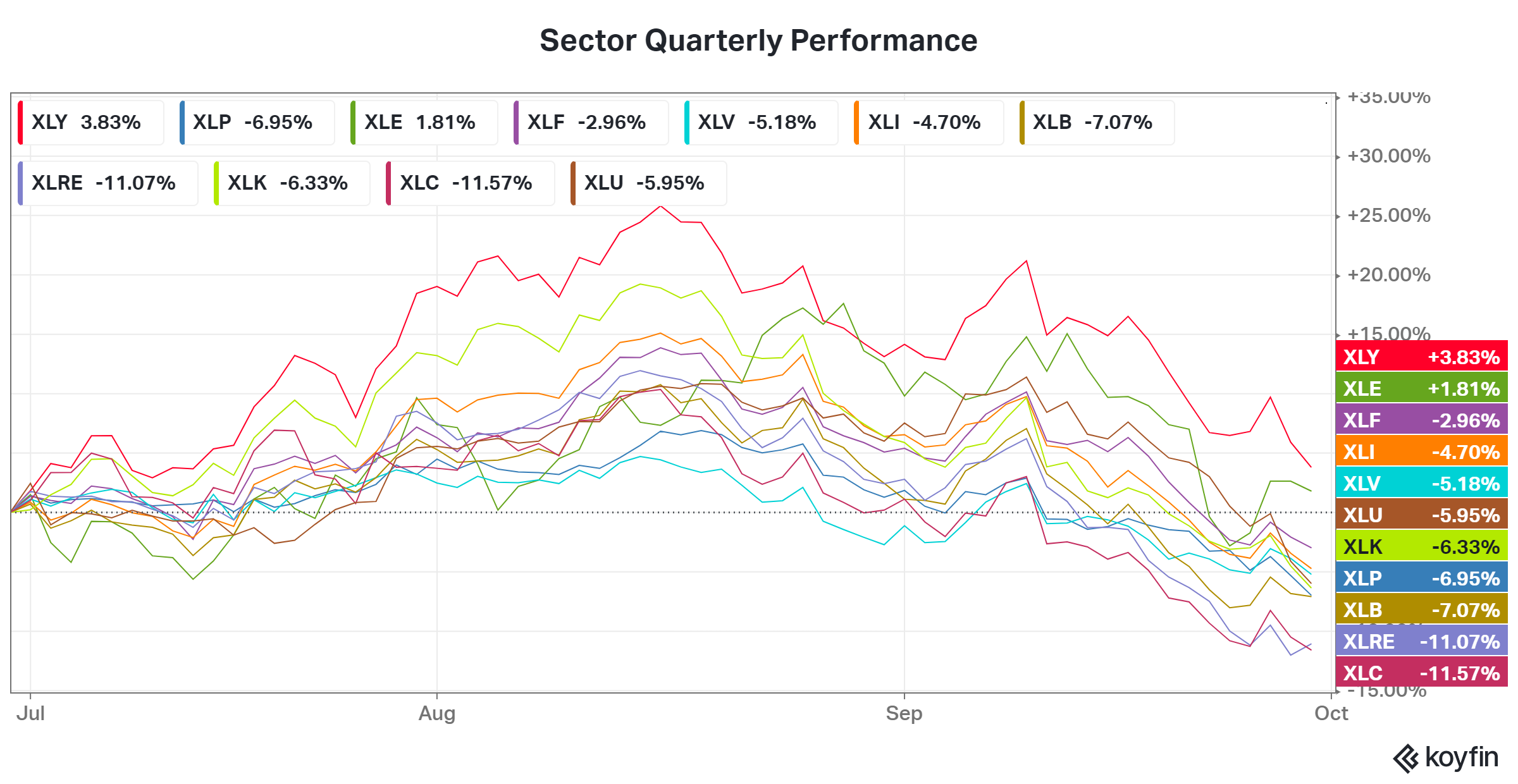 We’ll spare you the year-do-date picture because it doesn’t look much better, lol. As we head into the fourth quarter, there will be a lot of performance chasing from professionals as they look to salvage their fiscal year. Given the uncertainty in the global economy and financial markets, expectations are for more of the same volatility in Q4. 🙄

Whether or not that happens remains to be seen. But Q4 starts on Monday, so let’s enjoy the weekend until then! 🍺

🏠 American homebuyers to reverse colonize the U.K. With U.S. home prices and interest rates at a record high, some Americans look at the turmoil across the pond as a way to become homeowners. Prices in London are down nearly 20% over the past year due to local price declines and a weak currency, though supply remains scarce. Data suggests some buyers are in the market for a primary residence, but that much of the interest comes from those seeking investment properties overseas. CNBC has more.

⚡ Toyota CEO doubles down on EV strategy. Criticism is growing that the company is not moving fast enough to keep pace in the electric vehicle market. However, Toyota CEO Akio Toyoda said that the company would stick with its plans to offer an array of so-called electrified vehicles for the foreseeable future. It plans to invest roughly $70 billion in the category, including $35 billion in all-electric battery technologies over the next nine years. More from CNBC.

🚬 Altria will compete with Juul, which it already owns. Nearly four years after buying a 35% stake in e-cigarette maker Juul Labs, Altria is opting out of its non-compete deal with the company. It said, “The decision to terminate our non-compete maximizes our flexibility to compete in the e-vapor space while maintaining our economic interest in Juul.” Given that their investment has been written down from $12 billion to nearly zero, this could be a fresh start for Altria. Yahoo Finance has more.