Good evening everyone and Merry Christmas! 🎄

Markets rebounded from the day’s low to close above key technical levels. Midcaps (-1%) and Smallcaps (-0.5%) snapped their three-day win streak. The market breadth was weak with two stocks falling for every one gainer. 🔻

L&T Finance sold its mutual fund business (finally) to HSBC for Rs 3,200 cr. The stock fell the most in over 2 months. Read more below. 🧐

Ajanta Pharma (+3%) will consider the proposal of a share buyback on Dec 28. 👍

Cryptos were back in business. Bitcoin jumped 6%. Ethereum rose 5%. Solana and Cardano rallied between 6%-8%. 🔥

L&T Finance will sell its mutual fund business to HSBC for Rs 3,200 cr. The latest move is part of the Group’s long-term objective of streamlining operations and scaling its lending business. Yet the stock ended down 7%. Why so? 🤔

Experts say the deal valued L&T’s mutual fund business at a significant discount to its peers. Falling profits despite strong industry fundamentals and failed attempts to offload it in the past may have forced L&T to part with its business on the cheap. 🙅‍♂️

HSBC clearly got the better deal. Not only will it get L&T’s Rs 80,000 cr AUM for half the price but also become the 12th largest fund house overnight. That’s some bargain hunting. 💸 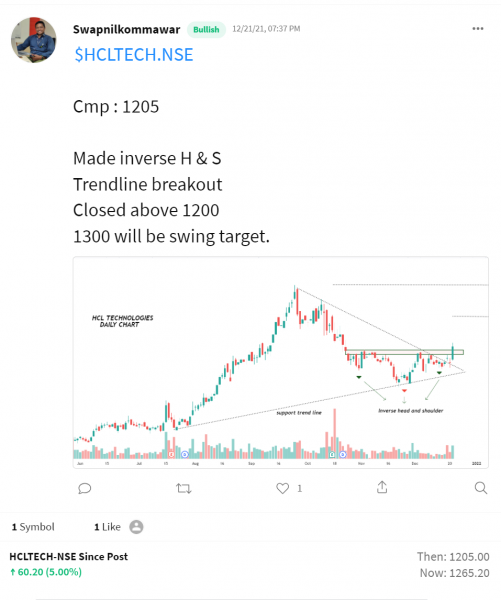 Here’s an interesting chart setup by Swapnil Kommawar on Stocktwits worth checking out. Add $HCLTECH.NSE to your watchlist and track the latest from our community.

Good news for India’s Netflix, Disney+ Hotstar, and Apple users. The Reserve Bank of India (RBI) has pushed its plan to ban all auto payments by six months. 😌

Here’s a quick recap: Previously, all subscription-based businesses were allowed to store users’ credit card details. Companies could auto-debit customers’ bank accounts at the end of each cycle. This ensured a super convenient renewal experience for both companies and users. 👍

BUT, the RBI saw potential issues and wanted to look out for the customer. ⛔ They mandated that companies to notify and customers to confirm each renewal. This requires a significant payment tech upgrade, which requires banks and payment processors to upgrade their software systems. 😔

Major companies like Apple made the switch to new rules. Banks, and payment aggregators reportedly missed the boat! As a result, autopayments stopped working, and several companies reported a hit on revenue. Hopefully, the 6 month extension provides time for banks and others to make the tech upgrade. 💸

In A Tight Spot

Edtech companies are facing bouncers and yorkers from the Indian Government. From calling out their unethical practices to demanding better regulation, the sector is at the centre of the storm. 🚨

Industry leader Byju’s has been accused of selling paid courses to students without their knowledge. Former Byju employees blame the unfair sales tactics on aggressive sales targets and high-pressure sales culture. The topic also received the spotlight in a recent parliamentary session. 😲

Speaking of Byju’s, their business continues to flourish despite the noise. They’re considering listing in the US via a SPAC merger, which could fast-track the IPO timeline. They’re in talks to raise $4 billion at a whopping $48 billion valuation! We recently covered the details here.

Here’s a look at this week’s top Nifty 500 movers. Minda Industries (+13%) took the pole position after advancing for a fourth straight week. Vakrangee (+13%) posted its highest weekly gain since August. Tata Teleservices (-14%) snapped its eight week gaining streak. Teamlease Services (-12%) post its worst weekly fall in over a month. Check out their charts below:

🏏 Ishant Vs Siraj And Other Selection Questions For India

🎄 Make Your Own Underwater Christmas Tree In Just 7 Easy Steps