Happy Monday! Stocks are green — here’s what you missed.

Stocks rallied early in the day and closed near the session’s highs. 📈 Trading volumes were light across the board, as we often see ahead of Memorial Day Weekend.

JPMorgan was in focus today after the company released updated guidance that sent the stock and the entire financial sector higher. Our main story covers that below. 👇 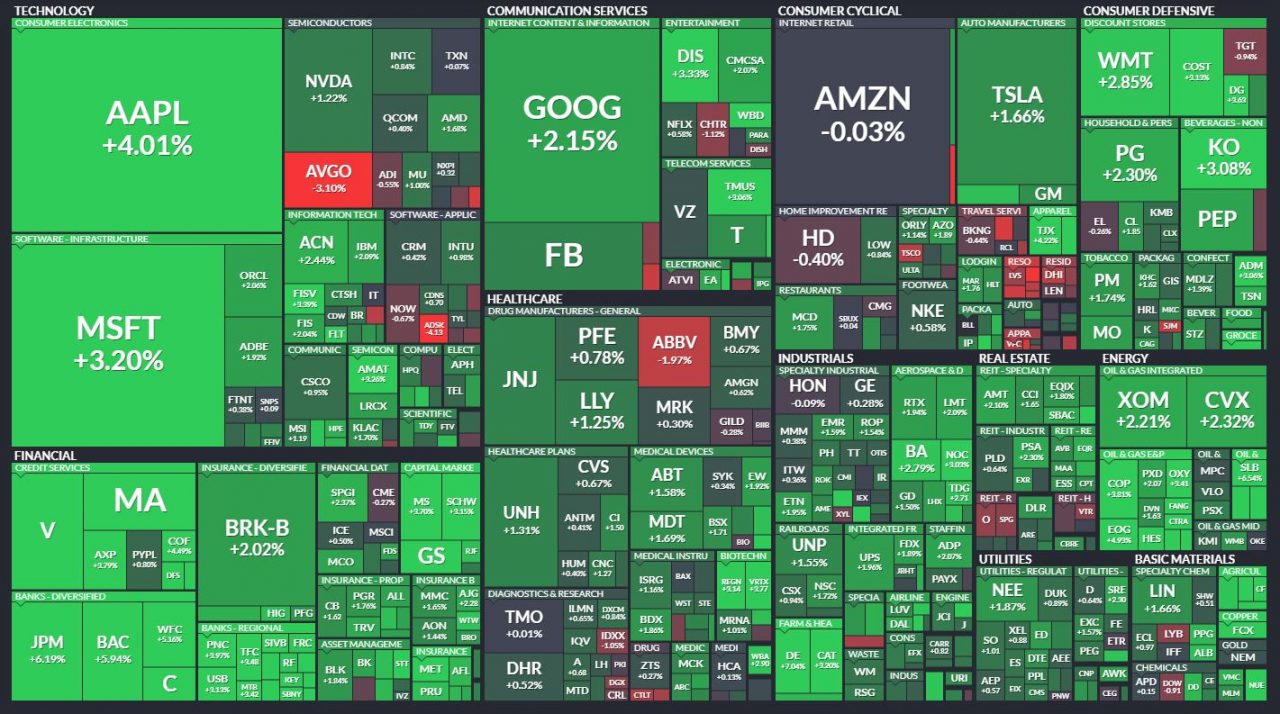 Many eyes are on the World Economic Forum’s 2022 meeting in Davos this week. Citi CEO Jane Fraser, who predicted a “brutal winter” for markets last October, is now convinced Europe will fall into a recession. 👀

Our second story recaps $ZM earnings, which sent the stock up 16% after hours. 👍

Lastly, investors are saying “Oh $SNAP” as the stock falls 28% after hours. More on that below. 👻

In crypto land, $REQ.X trended on Stocktwits as it rallied 31%.

JPMorgan rallied 6.19% today after the firm’s Investor Day presentations reversed its January guidance, which suggested that the bank would miss a key performance target for the next year or two.

The firm now says that a 17% return on tangible common equity “remains our target and may be achieved in 2022.“ 🎯

Additionally, it gave updates on its digital consumer bank in the U.K., which has attracted more than half a million customers and $10 billion of deposits since launching eight months ago. 💷

This U.K. initiative will lose the firm $450 million this year and not break even for 5-6 years. However, investors are looking at this test in Britain to determine whether the bank can successfully expand its services to other overseas markets. 🌐 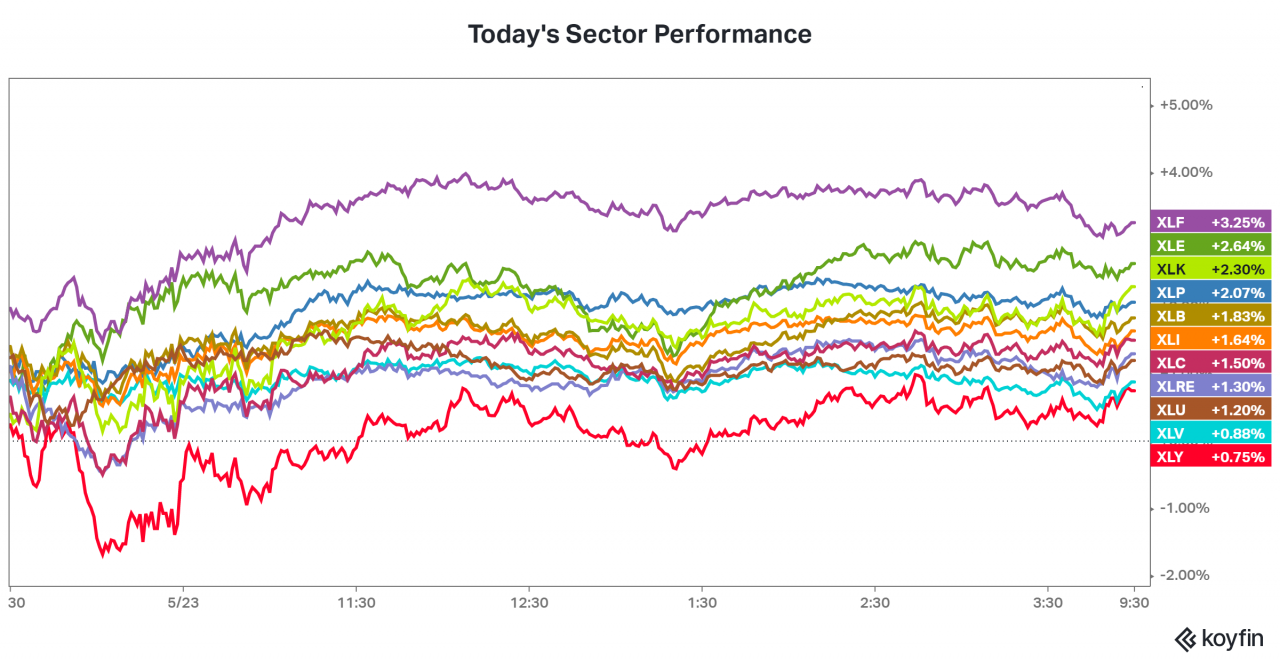 $ZM Is Zooming After Earnings Beat

Zoom is popping after the company reported better-than-expected earnings and strong guidance.

The company’s adjusted earnings per share beat the $0.87 expected by analysts, coming in at $1.03. Revenues met expectations at $1.07 billion. 📈

After five straight quarters of triple-digit revenue growth during the pandemic, investors were worried that Zoom would be unable to reduce costs as growth decelerates.

Today’s results and updated guidance suggest that the company may be on the right path.

With the stock down 85% from its all-time high set during the pandemic, investors are cheering any positive news, with shares up as much as 16% after hours. 👍

Gains are slowly fading, so we’ll have to see how investors ultimately digest today’s news.

Snap is collapsing after it surprised investors with a late-day guidance update. ⚠️

The company missed Q1 top and bottom-line expectations in April but apparently wasn’t aggressive enough with its forecasting at the time.

Additionally, he noted that Snap would slow its hiring pace for the rest of the year as it looks to control costs amid rising inflation and interest rates, supply chain shortages, labor disruptions, and platform policy changes. 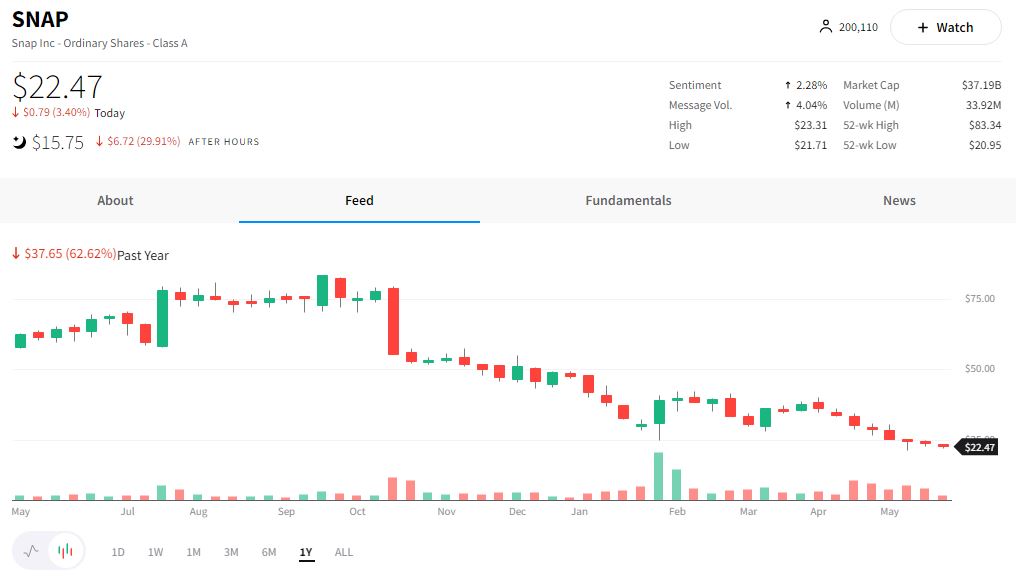 🍎 Broadcom in talks to acquire VMware. Chipmaker Broadcom is reportedly in talks with the cloud computing company VMware regarding a deal that would give Broadcom access to data centers for cloud users. The deal could be significant as it marks Broadcom’s transition to becoming a tech firm, not just a chipmaker. An analyst at Wells Fargo commented on the deal: “We believe an acquisition of VMware would be considered as making strategic sense; consistent with Broadcom’s focus on building out a deepening enterprise infrastructure software strategy.” Fortune has more.

☕ Starbucks is exiting Russia after 15 years. The company has paused its stores in Russia since March 8 of this year but since decided to retreat from the country due to the war in Ukraine. The coffee giant will shutter 130 store locations in Russia but still provide financial support to its Russian employees until they find new employment opportunities. Read more from CNBC.

🍋Buy now, pay later space sours as Klarna lays off 10% of its workforce. Citing the war in Ukraine, changing consumer behavior, and soaring inflation, Swedish-based Klarna will lay off 10% of its workers across the globe in an effort to cut costs. The company’s CEO commented on the layoffs: “When we set our business plans for 2022 in the autumn of last year, it was a very different world than the one we are in today.” However, Klarna says that the “vast majority” of its 6,500 workers worldwide will not lose their jobs. CNBC has more.

📦 Amazon adjusts warehouse strategy, looks to sublet more than 10 million square feet of industrial space. Since posting its first quarterly loss in seven years, Amazon is rethinking its warehousing business model amid changing economic conditions. The company is seeking tenants to sublet some of its warehousing space and is even in talks to alter its existing contracts with warehouse owners. The slowdown in Amazon’s e-commerce business prompted a company spokesperson to explain that subleasing “allows [Amazon] to relieve the financial obligations associated with an existing building that no longer meets our needs.” The Real Deal has the details.

📈 Memorial Day sale: Grill up $80 in savings with the biggest IBD Digital sale to date—get 1 year for only $249*

🚀 With U.S. help, Japan wants to go from player to power in space