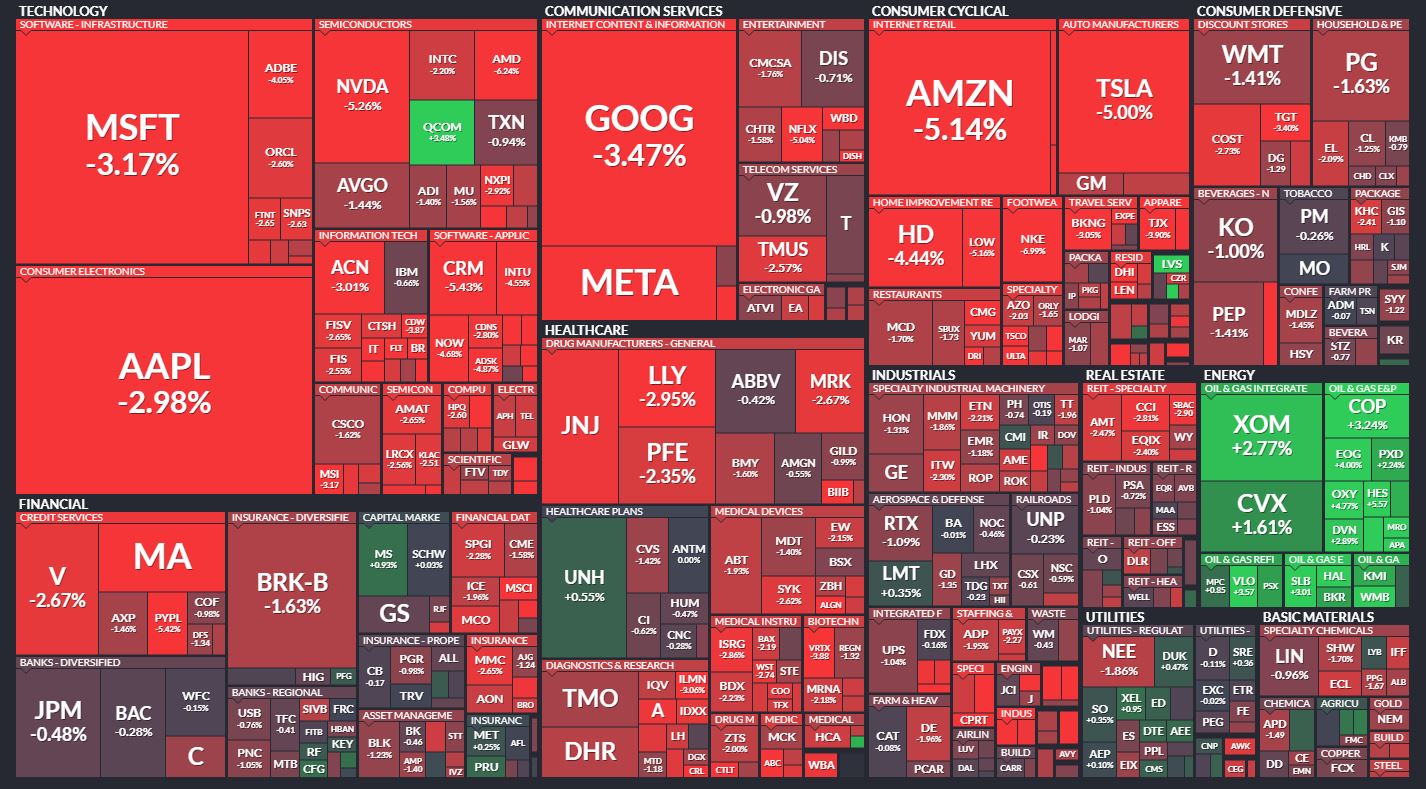 Crude Oil is back on the rise after two weeks of selling, as producers flag capacity limits. Additionally, data from the API showed an unexpected crude draw in EIA inventories. 🛢️

Warren Buffett’s Berkshire Hathaway continues its push into the energy sector, upping its stake in $OXY to 16.40%. ☝️

$WEJO shares jumped 18.03% after announcing a collaboration with $F that reportedly provides it access to Ford’s vehicle data in Europe. 📈

The Conference Board U.S. Consumer Confidence Data dropped to a 16-month low as worries about high inflation and a potential recession ticked up. Purchase intentions for big-ticket items increased, while vacation intentions fell on higher gasoline and airfare prices. 👎

S&P Case Shiller data showed that home price growth slowed marginally in April, up 20.4% YoY vs. 20.6% YoY in March. More timely data like mortgage applications and inventory shows a housing market that’s beginning to cool as rising rates and record-high prices scare reduce demand. This data jives with comments from homebuilders like KB Homes and Lennar, as well as layoffs across the real estate industry at firms ranging from JPMorgan to Compass and Redfin. 🏘️

U.S. wholesale and retail inventories remain elevated but came in lower than the prior month’s readings. 📦

European Central Bank President Christine Lagarde said the ECB is ready to ‘move faster’ on rates if needed. She recognized that the central bank has revised lower its forecasts for growth over the next two years but is still expecting positive growth rates.

Investors continue to worry about European inflation, which sits near 40-year highs, and the impact the region’s energy/cost of living crisis will have on growth. With that said, the ECB continues to target a July rate hike and, much like other central banks around the globe, thinks it can bring inflation without cratering the economy. 🛬

Additionally, NATO has reportedly resolved the concerns of Turkey, paving a path to admit Sweden and Finland to the world’s most powerful military alliance. The historically neutral nations began their bid to join NATO shortly after Russia started its war in Ukraine, which threatened the security of the entire region. 🤝

Meanwhile, Iran is applying to join the BRICS group of Brazil, Russia, India, China, and South Africa. In addition, Argentina recently used and reiterated its desire to join the group.

Lastly, a ‘Russian Salad’ on the menu at the NATO summit cafe in Madrid raised some eyebrows — see, we told you it was a slow news day. 🙃

That was it for today’s news, but if you want a recap of what to expect the rest of the week, you can find one in this past Sunday’s edition.

💰 Audit firm EY fined for cheating ethics exams. The Big Four accounting firm Ernst & Young is settling U.S. SEC charges that its auditors cheated on certified public accounting (CPA) exams and that it misled the agency’s investigators. The $100 million settlement is the SEC’s largest fine against an auditor. EY’s media relations director said that “EY acknowledges the findings determined by the SEC” and that the firm’s response has been “thorough, extensive, and effective.” Read more from Reuters.

📺 Activists win two Toshiba board seats. In a move expected to add momentum to the company’s exploration of potential buyout deals, shareholders voted in two board directors from activist hedge fund investors. However, tensions will likely remain high as activist investors continue pushing the company towards privatization. Reuters has more.

🚫 Airbnb permanently bans all parties on listings. The travel booking platform is permanently banning parties, taking its 2020 move of banning unauthorized parties at properties booked through its site one step further. The company says guests who break the policy can face suspension or a blanket ban. Read more from TechCrunch.

⚡ Volkswagen and Siemens look to Electrify America. Volkswagen Group subsidiary Electrify America took on its first external investor, raising $450 million to accelerate its rollout of ultra-fast charging stations in the U.S. and Canada. The deal values the company at $2.45 billion and includes a more than $100 million investment from German industrial giant Siemens. TechCrunch has more.

⛳ PGA Tour and DP World Tour expand alliance through to 2035

🔭 Mars has so much radiation, any signs of life would be buried six feet under

💸 OpenReplay raises $4.7m for its open source tool to find the bugs in sites

Do Kwon The Con Breaks Silence

It’s been a few weeks since we’ve highlighted anything from one of the crypto’s super villains, Terra’s Do Kwon. If you don’t know or forgot, he’s the dude who made Luna ($LUNA.X) and the spectacularly failed algorithmic stablecoin TerraUSD ($UST.X).

Kwon sat down with Coinage’s Zack Guzman for his first sit-down interview. It’s a fantastic read and a look into how unrepentant and disconnected this guy is to what happened. The further I got into that excellent interview, the more miffed I got.