A Lowe-Key Day Of Whale Watching

Stocks snapped their winning streak after a volatile session. 👎 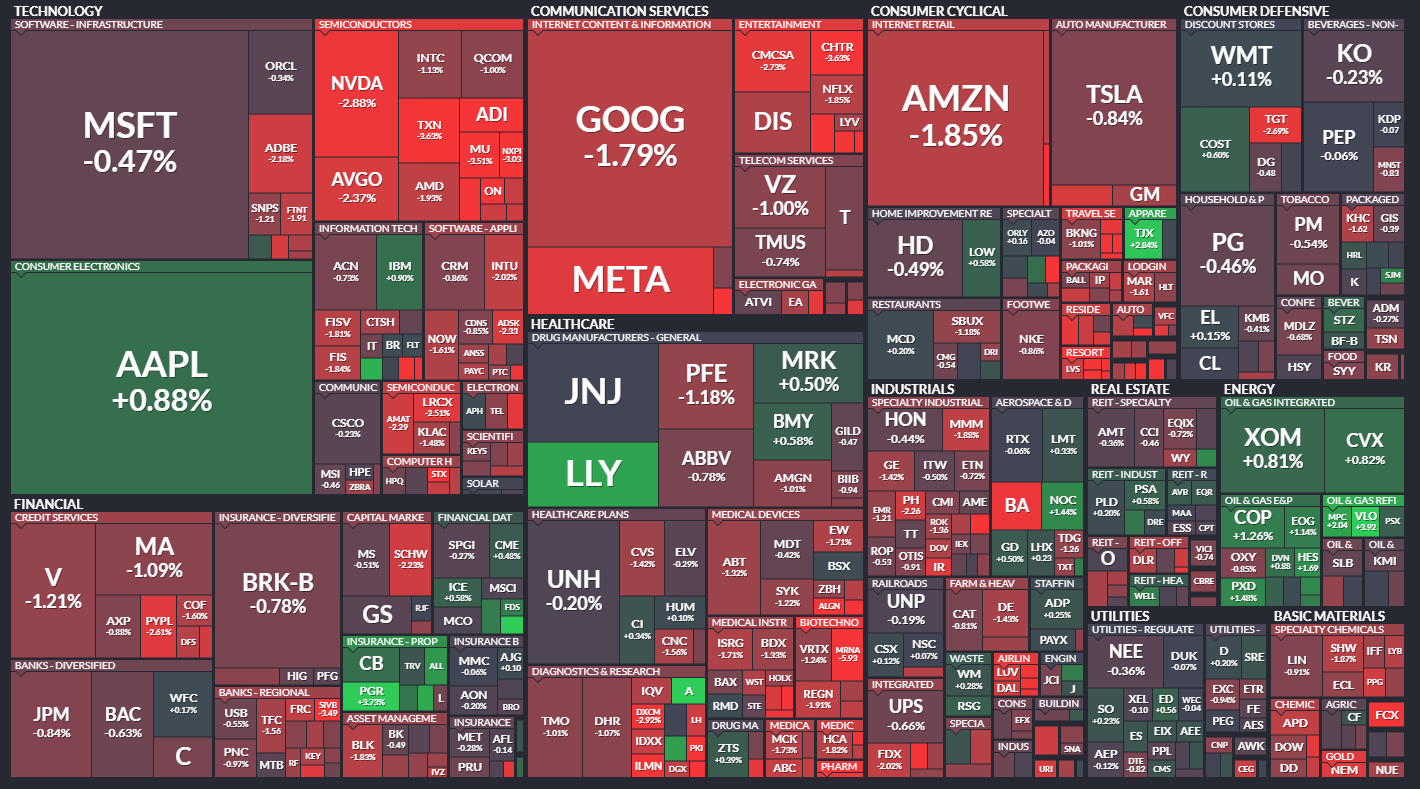 Only one sector closed green today. Energy was up 0.83%, while communication services led to the downside -1.94%. 💔

In individual stock news, Bed Bath & Beyond is cratering in extended trading after Ryan Cohen filed Form 144, showing his intent to sell all his shares. The saga continues… 🍿👀

Bluebird Bio popped nearly 9% after the FDA cleared its game-changing therapy. It’s one of the world’s most expensive healthcare treatments. The company plans to charge $2.8 million for the first-ever, one-time treatment for patients with a rare blood disorder called beta-thalassemia. 📈

ZIM Integrated Shipping Services fell 6% today after reporting earnings below expectations. Similar to what other transportation companies have been saying, ZIM experienced lower volumes but still beat revenue because of higher freight rates. 🔻

$DNUT shares were Krispy Kremed today, down 12% after the company’s earnings and revenues missed expectations. 🍩

Despite Tencent suffering its first-ever drop in quarterly revenue, the stock didn’t see an adverse reaction from investors. The company’s U.S. ADR $TCEHY actually rallied 3.12% in a volatile tape. 🤔

In crypto news, Crypto broker Genesis is parting ways with its CEO and cutting 20% of its workforce, and a new report showed that crypto hacks have surged 60% in 2022. ₿

After Walmart and Home Depot reported yesterday, we heard from Target and Lowe’s today.

Apparently, it didn’t learn from Walmart’s earnings management tactics, which included lowering guidance enough to beat it. That said, the two companies shared many of the same themes.

The company’s efforts to aggressively clear out excess inventory are in progress but have put a real damper on near-term earnings. Some analysts are looking at the company’s Q2 inventory of $15.32 billion (up from $15.08 billion) and saying that their efforts aren’t making a dent.

However, management pushed back, saying that the number is elevated due to cost inflation, receiving inventory earlier to be ready for the holidays and that their overall inventory mix is far more favorable. 👍

Also, like Walmart, the company canceled more than $1.5 billion of orders in the lower-demand discretionary categories. They also faced higher transportation costs and a more discerning consumer due to the economy’s broader inflation and macro trends. 🔺

Overall, investors weren’t too harsh on the stock (-2.69%) as much of the information was already public knowledge. Instead, investors look forward to seeing how well the company can navigate the challenging macro environment and deliver the items consumers want in the year’s second half. 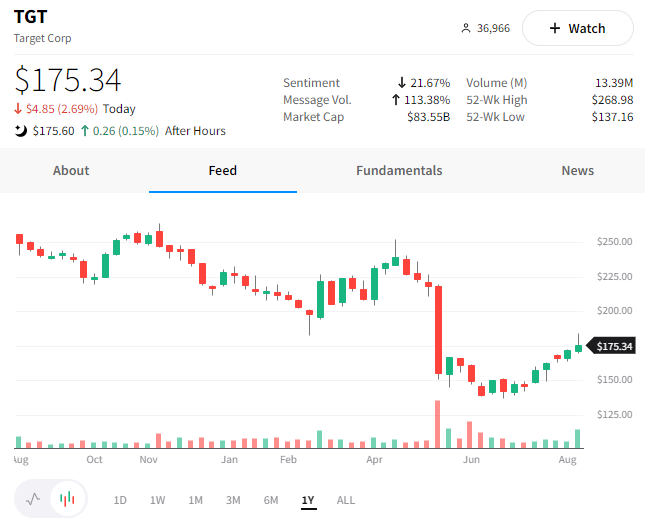 Lowe’s reported better than expected earnings, but revenue missed the mark because of a “shorter spring season.” 🌦️

The primary difference between Home Depot and Lowe’s is their customer mix. About 75% of Lowe’s customers are “do-it-yourselfers,” while Home Depot has a larger share of professionals shopping at its stores. When we drill down into the results, that remains the key differentiator. All the other themes discussed on their earnings calls were similar in nature. 📝

With that said, Lowe’s continues to make efforts to diversify its customer base. For example, the company said its new loyalty programs allow it to attract more professionals and drive repeat visits. For example, professionals in the program spent 3x more than those not enrolled, and the company expects accelerated growth in this segment in the back half of the year.

For now, though, the success of Lowe’s ultimately rests on the American consumer’s shoulders. Although Home Depot and Lowe’s executives said they’re optimistic about consumer spending and haven’t seen that significant of a slowdown just yet, a lot can change given the uncertain macroeconomic environment.

After an initial pop at the open, Lowe’s shares settled back down to marginally positive at the close. 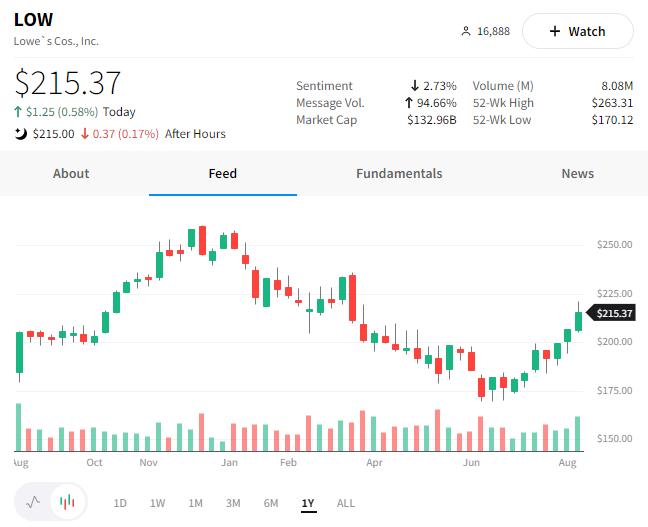 It’s 13F season, and market participants are rushing to see what the most prominent investors are buying and selling. 🐋

Today we’ll look at Berkshire Hathaway’s 13F to see what Buffett was up to in the second quarter.

The Federal Reserve released its July meeting minutes today. And while there’s often a lot of noise in the meetings (and this one was no exception), the key takeaway ultimately hasn’t changed. 🔑

The Federal Reserve will keep hiking rates until the core measures of inflation show meaningful progress towards their 2% long-term rate.

So far, we’ve not seen that. And as a reminder, the committee doesn’t make decisions based on volatile headline numbers, so don’t get your hopes up just because oil has sold off.

We’ve talked about inflation this summer more than any human should, so we’ll leave it at that.

In the meantime, Europe managed to avoid a recession in Q2. The preliminary read on Eurozone GDP rose 0.6% QoQ and 3.90% YoY, though it’s not yet out of the wood. 😮‍💨

The continent is facing a whole host of issues like an energy/food crisis, record temperatures and droughts, the war in Ukraine, and many other things hampering their economy. Some countries are managing better than others, but structurally there are a lot of issues facing this region of the world. Hence, many analysts expect this growth reading to be the last positive one for a while. 🚩

And to wrap up our economic news, headline U.S. retail sales were flat in July. Dropping gasoline prices freed up spending money for other goods, as core retail sales rose 0.8%. 🛍️

💊 Pharmacies lose a critical case over the opioid crisis. In the first opioid trial for national pharmacy chains, a federal judge has ordered Walgreens, CVS, and Walmart to pay Lake and Trumbull counties a combined $650 million for their role in the epidemic. The ruling is a historic one since many other communities and companies will use it to get a feel for how future cases of this nature will go, given more than 3,000 cities and countries have sued pharmaceutical companies over their role in the opioid epidemic. Cleveland.com has more.

💩 Airbnb unveils new party-pooper technology. Nearly two months after the company said it would permanently ban parties at properties rented through its platform, it’s now deploying a new technology to enforce the rule in the U.S. and Canada. The new system analyzes various factors to “help identify potentially high-risk reservations” and prevent those users from completing a booking. More from CNN Business.

🔻 World’s largest sovereign wealth fund loses $174 billion in the first half. Norway’s sovereign wealth fund lost a record amount of money in the first half of the year as inflation, and global recession fears took their toll. On the bright side, the fund’s -14.4% return was marginally better than its benchmark index but suffered as its equity, fixed income, and infrastructure investments all sold off broadly. CNBC has more.

📱 Social investment platform eToro expands its reach with a $50 million acquisition. The multi-asset social investment network just received approval from FINRA to move forward with its acquisition of fintech startup Gatsby, a commission-free option and stock-trading app aimed at younger traders. The addition will help eToro “…provide U.S. users with a safe and simple way to trade options.” More from TechCrunch.

✈️ American Airlines bets on supersonic travel. The airline has signed a deal with the company Boom Supersonic for 20 of its supersonic Overture planes, which will fly as fast as Mach 1.7, or 1,304 mph. This is Boom’s second firm order from an airline after United Airlines agreed to buy fifteen planes last year. With that said, the company is still years away from its vision becoming a reality. It still needs to build a new manufacturing plant in North Carolina but expects to roll out the first model in 2025, with the first flight in 2026. CNBC has more.

🚗 Dodge will discontinue its Challenger and Charger muscle cars next year

🏰 ‘I am here to kill the queen,’ Windsor Castle intruder told police

🤦‍♂️ Amazon is internally testing a TikTok-like feed in its app

🎥 Robert De Niro to star opposite himself in gangster drama ‘Wise Guys’ at Warner Bros.

We know you’re suffering from a food coma, and we are too. But let’s recap the shortened holiday week and prep for the week ahead. 👍

Good afternoon to everyone working today – hope your commute wasn’t too bad. It’s a shortened trading session, so we’ve got a shortened but news-filled issue.

Risk assets continued to trudge higher ahead of tomorrow’s day off and Friday’s half day. We know most of you have checked out already, so let’s get you caught up and off to eat some Turkey. 🦃

Well, he’s at it again, and this time it’s against one of the Sharks – and the saltiest of all the Sharks on Shark Tank: Kevin “Mr. Wonderful” O’Leary.

After a strong month of gains, Chinese stocks are pulling back on news that lockdowns are once again hurting its economy.

The country’s capital city, Beijing, struggles to keep Covid under wraps as Thursday’s local infections rise to 1,800. That brings the monthly total to 10,000, prompting additional lockdown measures that will grind its economy to a halt. Road, subway, and other transportation use are down dramatically in Beijing and smaller cities.