It was a quiet week at the index level, but a lot happened under the surface as earnings season continues — let’s see what you missed. 👀

Shares of Sanofi and ProventionBio popped after the FDA approved their treatment to delay the onset of type 1 diabetes. 👍

Carvana shares fell another 3% as the company laid off 1,500 employees. ❌

Houseware retailer Williams-Sonoma dropped 6% after declining to update guidance through fiscal 2024 because of economic uncertainty. 🏠

Farfetch fell 11% after reporting a Q3 loss and reducing its full-year guidance. 📉

So, to alleviate those fears, the company is rolling out several new features.

The first is a new service called Airbnb Step, connecting new hosts with experienced ones to help them get started. Second, it’s upgrading its Aircover by tripling its damage protection up to $3 million. And it’s also installing a stronger verification process for guests. 🛡️

But the most interesting part of all this is how the company announced it. As part of this roll-out, the company’s CEO Brian Chesky listed the guest room of his San Francisco home on the site for people to book, just as he did when he started the company.

Whether or not these changes will help boost $ABNB shares over the long run remains to be seen. But in the near term, we can expect some interesting stories to come out of this experience… 😂

These Fast-Food Robots Are Going On A World Tour 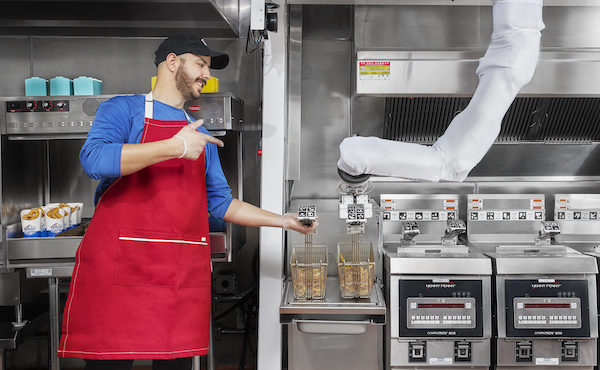 After automating kitchens at Jack in the Box, White Castle, and other major U.S. brands, this fast-food robotics startup landed an international partnership to grow its reach by 17X.

What investors need to know:

Learn about Miso’s before the opportunity ends tonight!

However, current estimates are that roughly 1,200 full-time employees resigned on Thursday, which leaves about 1,700 remaining.

A 75% decrease in headcount and Musk’s erratic management approach left many Twitter users concerned about whether the platform could continue in its current state. With that said, we all woke up this morning, and the site was still active. So it looks like doomsday will have to wait… ⏳

But besides the juicy headlines the Twitter situation generates, the overall situation is important for more than just Musk-related reasons.

Some proponents of his approach say that tech companies today have too many employees and should operate much leaner. The typical example thrown around is that Craiglist only has 50 employees (or something like that). So, if Elon does manage to pull this transformation off, that will likely prompt investors to question other companies’ headcount levels/approaches. 🤔

In the meantime, we’ll all sit back and watch this situation unfold on none other than…Twitter. 🍿

The company’s adjusted earnings per share of $1.27 beat the $1.11 expected. Meanwhile, revenues of $2.17 billion exceeded the $2.09 billion analysts estimated. This quarter’s results helped reassure investors that its inventory mix is in a healthy position and that it’s well-prepared for the upcoming holiday shopping season.

Like other mall-based retailers, Foot Locker remains in a tough long-term position, especially as the economy weakens. With that said, in this environment, even marginal earnings improvements like those today are a breath of fresh air to investors. 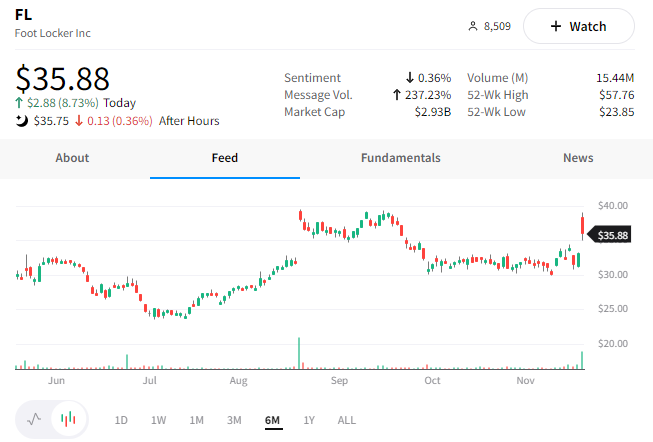 👎 U.K. residents see living standards fall back to 2013-2014 levels. The Office of Budget Responsibility (OBR) suggests that real household disposable income will fall 4.3% in 2022 as data shows that the country entered a recession and that GDP will contract in 2023. The cumulative decline in living standards would push the country back to 2013-2014 levels, erasing nearly a decade of growth. The data continues to suggest the new Prime Minister will face significant headwinds as he looks to turn the country around. CNBC has more.

🎫 Ticketmaster’s Taylor Swift debacle renews antitrust scrutiny. The company canceled its public sales for Swift’s tour due to the “extraordinarily high demand on ticketing systems and insufficient remaining ticket inventory to meet that demand.” The cancellation comes shortly after the presale event for the tickets hit several snags, leaving fans fuming about their inability to get tickets. The curfuffle has resulted in fans, lawmakers, and others involved calling for more oversight over Ticketmaster and the entire industry. More from TechCrunch.

🏘️ Existing home sales fell for the ninth straight month. Housing data continues to decline month after month, with sales of previously owned homes falling 5.9% in October and 28.4% YoY. With that said, supply remains stubbornly low as owners lack the incentive to sell in the current high price and high-interest rate environment. With that said, price growth continues to slow, with the median price of an existing home sold hitting $479,100 in October. That’s just a 6.6% increase from a year earlier. CNBC has more.

🏥 Children’s hospitals call on Biden to declare an emergency. The medical community is sounding the alarm over an ‘unprecedented’ surge in RSV, or respiratory syncytial virus. Infants younger than six months are being hospitalized with RSV at seven times the pre-pandemic rate. Concerns remain that the hospital system could be put under enormous stress as this virus, covid-19, and the flu all come to a head this winter. More from CNBC.

🤖 Even automation companies are cutting headcounts. While robots are typically taking other people’s jobs, sometimes the companies that make the robots must also reduce headcount. That’s what we’re seeing from autonomous delivery startup Nuro, which is laying off about 300 employees, or 20% of its workforce. The weakening economic outlook means it must cut costs and preserve cash to weather the storm and continue to grow long-term. TechCrunch has more.

January 2023 Compared To Past Januarys

January 2023 was the best month for Bitcoin (and the broader crypto market) in over 15 months. 👍

How have previous Januarys faired?

We’re in the heart of earnings season, so there’s a lot to keep on top of. Luckily, we’ve summarized today’s biggest movers and commentary below. 📝

British multinational oil and gas company Shell posted its highest-ever annual profit of $40 billion. Like its peers, it’s returning some cash to shareholders via a $4 billion buyback program and a 15% dividend per share increase. Additionally, the company continues to work towards its net-zero emissions goal by 2050. However, analysts point out that Shell’s fossil fuel investments continue to dwarf its renewables investments. $SHEL shares were down 1% on the day. ⛽