Why Crypto Traders Are On Edge Despite Rally

The cryptocurrency market is hovering below the $1 trillion mark, creating anxiety for bulls and bears alike. Over the weekend, 57,000 positions were liquidated for over $151 million in losses when Bitcoin ($BTC.X) dipped below $22,000.

In today’s Litepaper, we’re starting with Technically Speaking and what the bulls and bears are looking at. We’ll look at new legal issues for Terra’s Do ‘Con’ Kown and new legal problems for Celsius ($CEL.X). Also on deck is the growth in the metaverse sector and an update on the FTX buyout offer of Voyager.

Before we get into the nitty-gritty, though, here’s how the market looked at the end of the trading day:

The Total Market Cap for crypto is hovering just below the $1 trillion mark near the $990 billion level. After mainly trading sideways over the past six days, today’s session has seen Bitcoin face its weakest day since last Monday.

If you remember, last Monday saw the Total Market Cap spike by +8.85% – the biggest single-day percentage gain since February 28, 22. So does today’s intraday pullback mean the rally is over? We’ll see, but let’s look at what the bulls and bears want.

The green diagonal channel on the daily Total Market Cap chart above is a pattern known as a Bull Flag. Bull Flags are common continuation patterns analysts interpret as a precursor to another push higher. However, confirmation is always required.

For bulls, the price level analysts are watching is $1.02 trillion. A close at or above $1.02 trillion would position the market cap above the upper trendline of the Bull Flag and above the previous highest close from Sunday.

Note that the ease of movement for the Total Market Cap is weighed heavily to the upside. The lightly shaded gray area between the two blue horizontal lines represents an extremely thin range in the Volume Profile.

Because the Volume Profile is extremely thin, between $975 billion and $1.18 trillion, analysts expect a much easier time moving higher than lower. 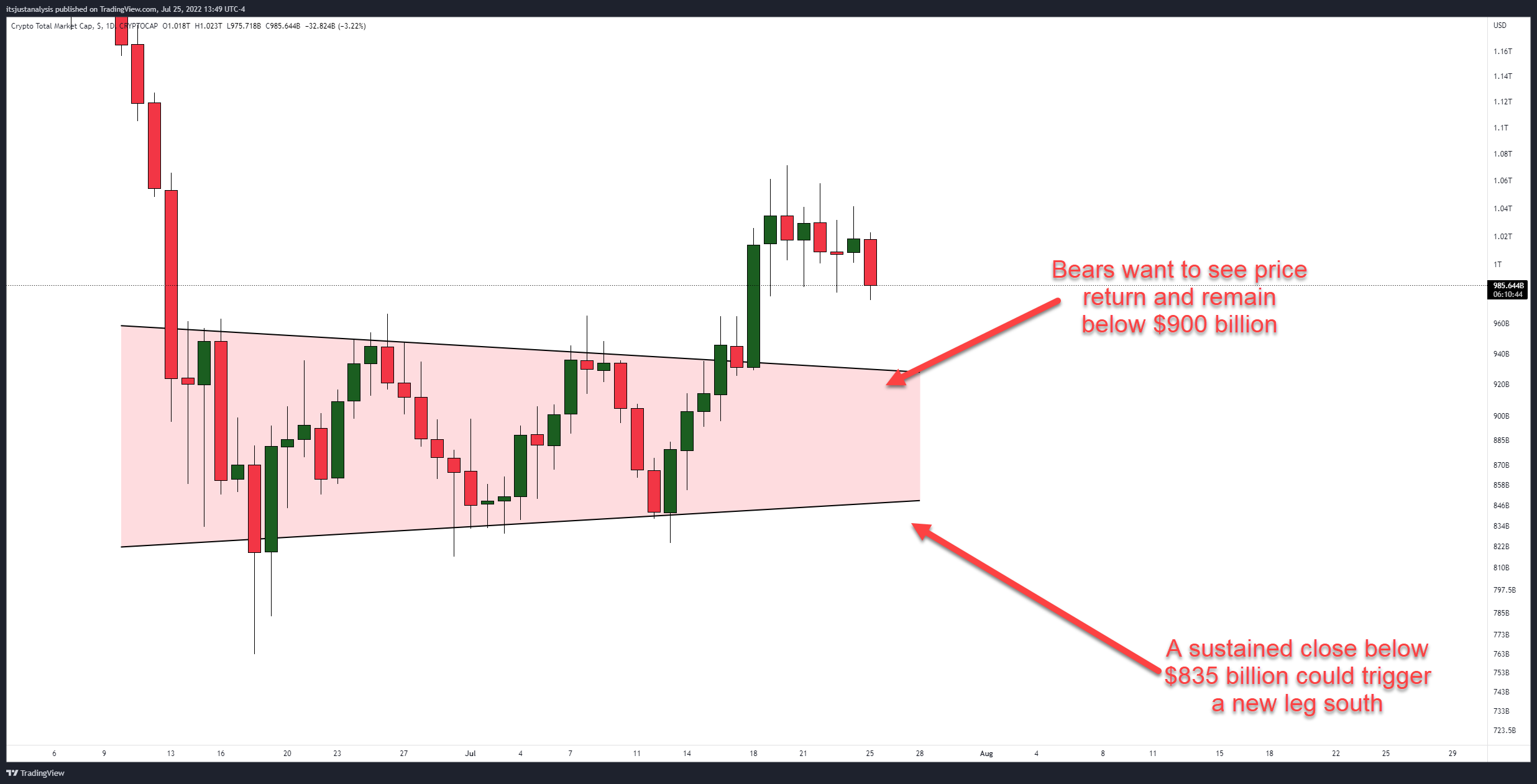 The opportunity for bears may have already come and gone. Price already moved above the Bearish Pennant last Monday and has remained above that prior pattern for a week.

If the breakout last Monday was a fakeout, bears want the Total Market Cap to return inside the Bearish Pennant near the $900 billion value area. However, this is a particularly volatile zone that could generate some massive whipsaws in price action, equally punching the bulls and bears in the mouth.

For bears, analysts see a sustained breakout below $835 billion as a critical condition for the crypto market to experience another major sell-off. 🟩

Celsius Hit With A New Lawsuit, And Do ‘Con’ Kwon Hit As Well

Celsius’s famous motto is ‘Banks are not your friends.’ That’s probably true.

But most people’s banks didn’t lose all their customer’s money in one fell swoop. 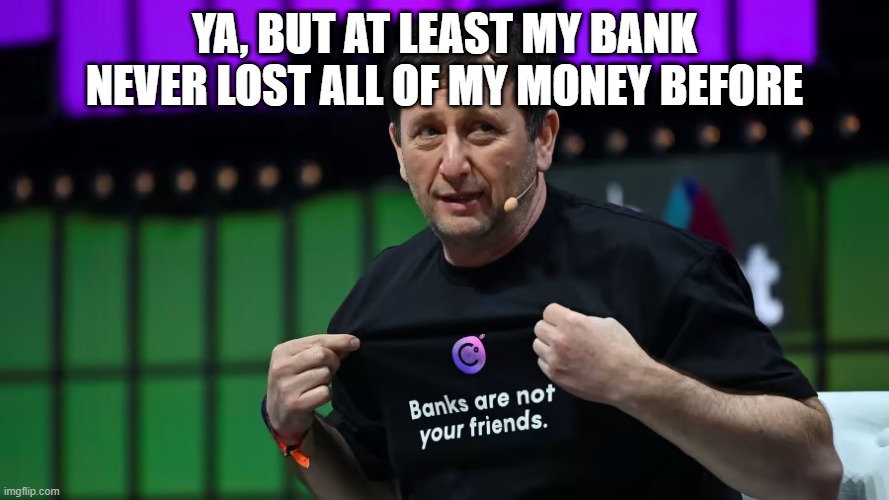 Via BusinessWire, the complaint alleges that “… Defendants violated provisions of the Exchange Act by carrying out a plan, scheme, and course of conduct that Celsius intended to and did deceive retail investors and thereby caused them to purchase Celsius Financial Products at artificially inflated prices; endorsed false statements they knew or recklessly should have known were materially misleading, and made untrue statements of material fact and omitted to state material facts necessary to make the statements made not misleading.” 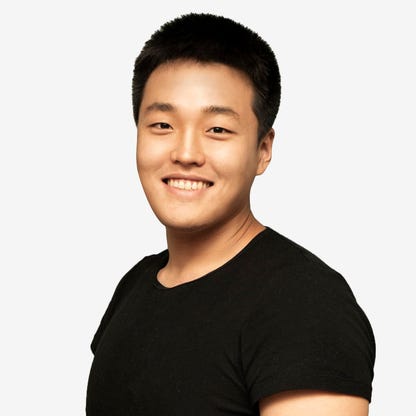 Speaking of a bad hit, someone with a particularly punchable face, Terra’s Do ‘Con’ Kwon gets hit with a new lawsuit too. This new class action lawsuit is filed against TerraForm Labs ($LUNA.X), Three Arrows Capital, Do Kwon, and other entities that allegedly violated provisions of the Exchange Act.

We’ll keep you updated as these stories develop. 🥊

Voyager Says Hell No To FTX

There are a lot of ways to say no. ‘No, thank you.’ ‘Thank you, but no.’ ‘I’m sorry, I’m just not interested.’ Voyager’s response to FTX’s ($FTT.X) buyout offer was, according to Voyager’s ($VGX.X) bankruptcy lawyers, “… low-ball bid dressed up as a white knight rescue.” Lawyers speak for “GTFO.”

FTX founder and CEO Sam Bankman-Fried shot back that customers will… he used some colorful language in this Tweet:

3) Well, the *traditional* process is that before customers get their assets back, they get fucked.

First, there's a long, drawn out process, during which funds are frozen. It can take years.

Remember Mt. Gox? That process is *still going on*.

A good point on the Mt. Gox debacle – which, coincidentally, is almost finished. Not sure you could pick sides here. Voyager is just one of several prominent victims of the Three Arrow Capital’s (3AC) shitshow.

While Voyager and FTX are open and public about what’s going on, you have 3AC’s founders continuing to play Houdini, acting shocked that people are pissed at them.

And nothing makes people less pissed off at you more than ghosting your customers and creditors while you make way your way into the loving arms of ‘Na na na na boo boo, you can’t catch me Dubai.’

Hard to pick sides when Voyager is acting more above board than most and walking the tight rope of protecting their’s and their customer’s interests, and FTX is doing its thing – saving the whole damn industry from itself seemingly by itself.

Want a side to pick that you can hate? The two 3AC wankers on a golden canoe to Dubai, that’s who you can hate. 🎯

Like other sectors in the broader cryptocurrency space, the metaverse side of crypto continues to see adoption, investment, and growth.

The University of Tokyo is adding several programs that will take place in the metaverse. Grad students in engineering and engineering-related schools are teaching anyone from high school to adult learners.

*If you’re at all involved with the FX (Foreign Currency) markets, then you’ll know that the Turkish Lira has bounced around more than Ish Smith (played with 12 different NBA teams), so don’t expect that number to be accurate for long.

Traditional finance looks at crypto investors/traders like everyone else looks at new digital real estate investors/traders. It’s a look that says, ‘how stupid do you have to be to invest in this?’ So maybe I’ll miss the boat on this one, but there’s a ton of growth nonetheless.

Research by technavio shows that digital real estate sales in the metaverse may grow to over $5 billion by 2026. Estimates are that roughly 41% of that growth will come from North America.

How much adoption and interest from traditional real estate money remains unknown.

Bullets From The Day

🟥 Hong Kong gets its first metaverse churches. Congregational avatars, virtual preaches, singing of hymns, and mingling, all without the watered-down church coffee. South China Morning Post has the full scoop.

🚽 Bitcoin’s ($BTC.X) dip over the weekend caused massive liquidations. According to analytics from coinglass.com, more than 57,000 people were part of a $151 million liquidation when Bitcoin dipped below $22,000. More from newsbtc.com.

⚠️ James Howell, a man famous for accidentally throwing out a hard drive containing 7,500 Bitcoin in 2013, wants permission to search a local landfill. You can, um, dig into this decade-long quest from Business Insider.

💼 US Fed is set for a new rate this week, but how aggressive will it be?

✌️ A quarter of surveyed companies in Asia-Pacific involved in crypto

Welcome to the Stocktwits Crypto Data Dive for Week 48 of 2022!

This is a new Saturday edition of the Litepaper that we’re testing out through the end of the year. And after a couple of weeks of testing in feedback, we’ll restart with week one in January and make this a staple in your weekend crypto itinerary. 👍

Today was a big day for the crypto community. Why? Because the fallen-from-grace Sam Bankman-Fried went live with Andrew Ross Sorkin at DealBook Summit 2022. We’re diving into that big time today/tonight.

Also on deck for today: Coinbase ($COIN) base is delisting four big-name cryptocurrencies, Kraken is eliminating 30% of its workforce, and a look at Bitcoin from a technical analysis perspective.

Here’s hoping your Thanksgiving was full of fun, food, and family. And here’s to hoping you didn’t spend too much time checking your phone for updates on crypto prices.

Holidays and weekends are sometimes the worst (and best) times for cryptocurrency price moves. With little volume, it will be interesting to see what happens this weekend.