One half of the year is over, and the next half has just begun. It’s the 4th of July holiday weekend in the US. The 4th of July is US Independence Day for those not from the US. If you’re some cheeky fellows that I know from Britain, you affectionately call it Good Riddance Day.

So what happened between yesterday and today? A good amount! Bitcoin achieved a historical price decline for June, Grayscale is suing the SEC, while whales are unfazed and still buying up crypto despite the bear market.

Just a reminder, no Litepaper going out on Monday because of the holiday. Because of that, today’s edition is big and chunky so you have something to chew on until Wednesday!

But before we can head off into beer, brats, and bottle rockets, this is what the crypto market looked like at the end of the trading day:

We’re starting this Litepaper with a bit o’ technical analysis. I usually reserve this for the end, but I think it’s extremely important to get an idea of how badly Bitcoin ($BTC.X) has fallen off the fail tree and hit every single limb, branch, and twig on the way down. 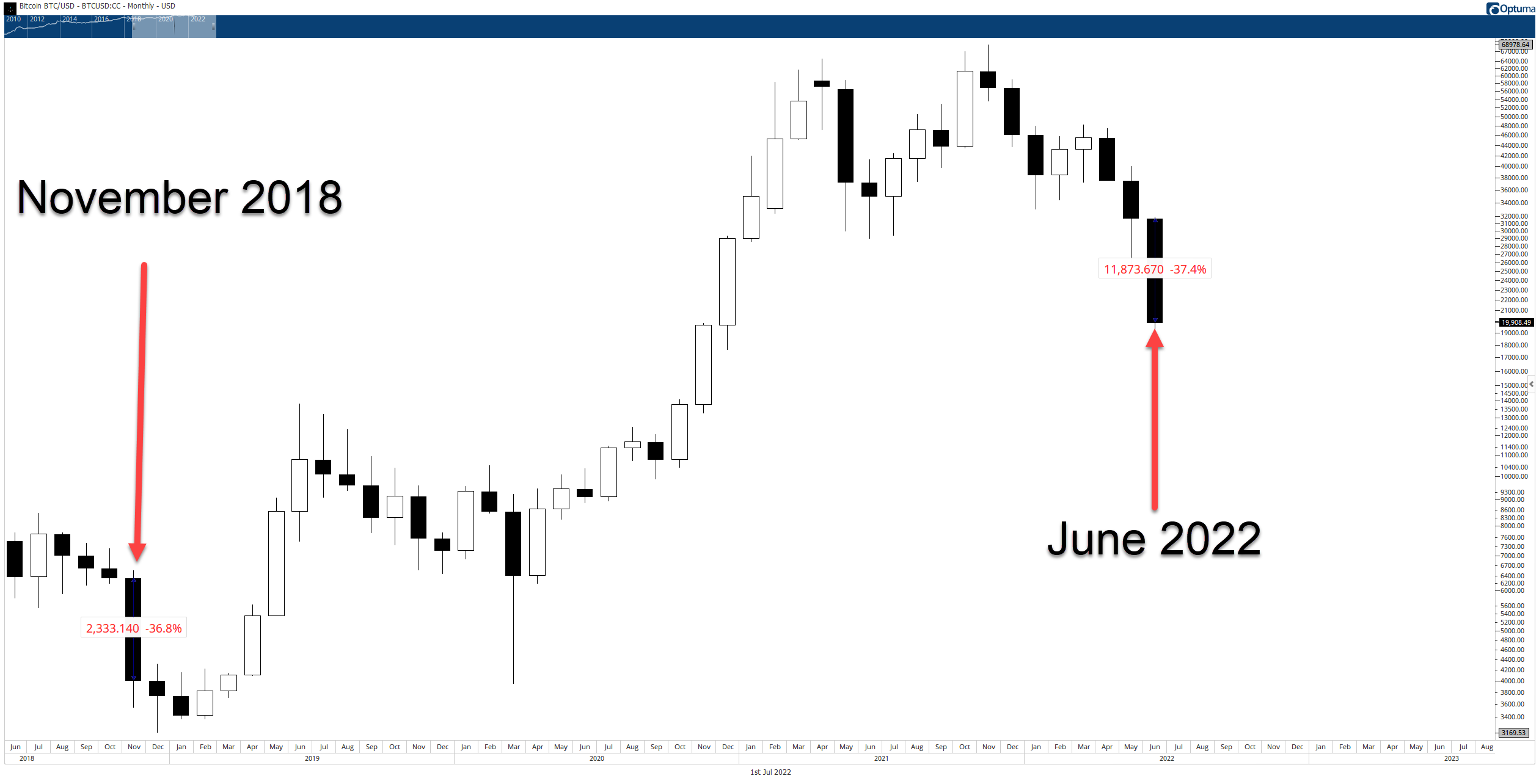 Above is Bitcoin’s monthly candlestick chart, which shows June 2022 was officially the worst-performing month for Bitcoin in 11 years. And the third-worst in its history. The prior record-holder was November 2018, with a 36.8% loss. That compares to June 2022’s 37.4% loss, which is pretty much the same if you ask me.

Yes, there have been wider price ranges on a percentage basis, but as a measure of where Bitcoin started and ended the month, June 2022 was one of the worst ever.

The image above shows the monthly RSI with two red lines and two green lines. In Connie Brown’s Technical Analysis for the Trading Professional, she identified changes to the RSI that should be made. Depending on whether an instrument is in a bull market or a bear market, the new method of using the RSI has different overbought and oversold levels. In a bull market, overbought is 80 and 90, while oversold is 50 and 40.

For the TL;DR explanation: the RSI has hit a powerful support level. That means there is a high probability, not a certainty, but a high likelihood that some form of a significant bounce can occur for Bitcoin. Like a dead cat bounce.

But we’re not done with the nerdfest yet. Like a fireworks display that you don’t want to end, there is one more truly exciting and heart-pounding action-filled piece of technical analysis: time cycles.

If you want to journey into nerd town, scroll to the last article in this edition. It’s the final part of the Litepaper before I open a cold one before the long weekend. 🎇

Yesterday, the SEC unsurprisingly denied Grayscale’s spot Bitcoin ETF. The SEC, again, stated that there are concerns about Bitcoin’s susceptibility to manipulation. Unfortunately, that excuse has been the same that the SEC gives year after year.

However, there are Bitcoin ETFs based on Bitcoin futures. Which is a, um, derivative of the spot Bitcoin, so…

Also unsurprising was Grayscale suing the SEC. Maybe a little surprising was the timing: one hour after the denial. As a result of the refusal, Grayscale’s Bitcoin Trust ($GBTC) dipped lower.

The image above shows the Discount/Premium to NAV (Net Asset Value) of GBTC to BTC. In a nutshell, the image shows that GBTC is trading at a discount to BTC. In other words, investors can get exposure to BTC at a massive discount through GBTC versus buying it on the spot market. 💵

Despite the bear market in crypto, the big players are unfazed. In our last Litepaper, we discussed Microstrategy ($MSTR) CEO Michael Saylor buying more Bitcoin near the $20,000 value area. And he isn’t alone.

Thank you for selling cheap 😉 pic.twitter.com/ZHwr0Ln1Ze 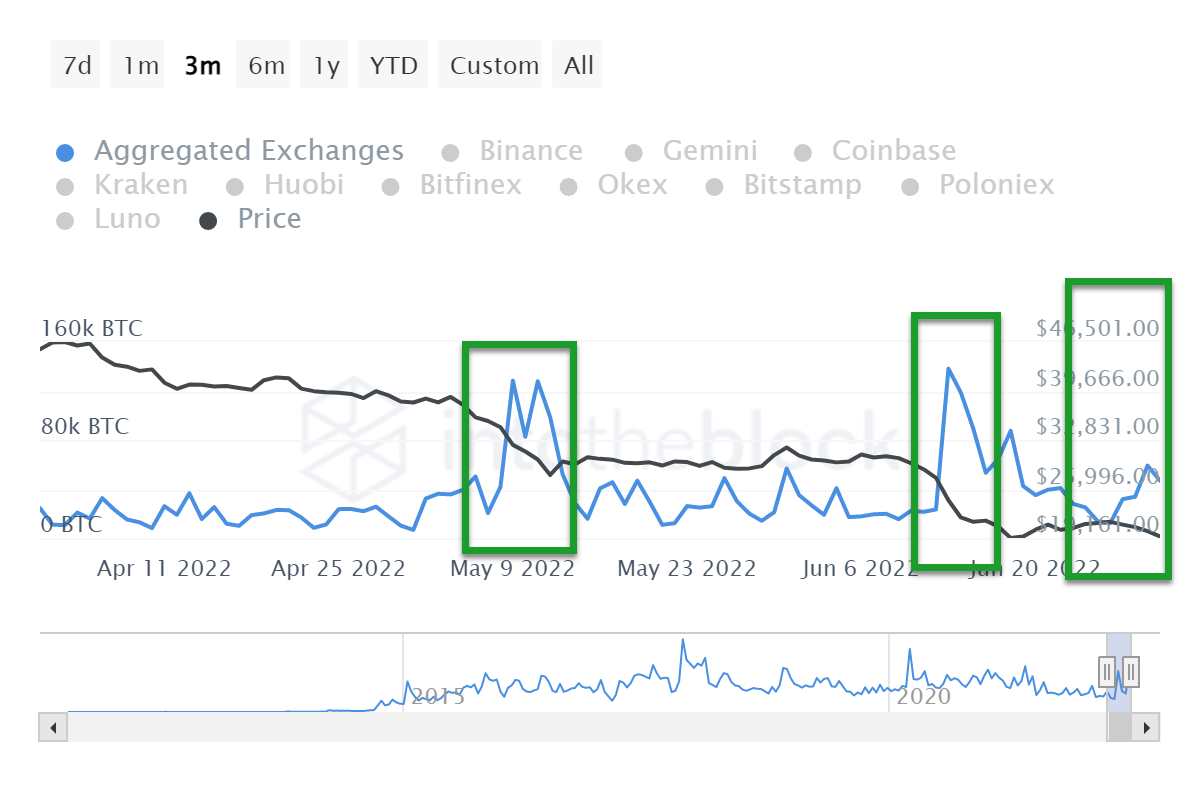 Crypto leaving exchanges is viewed as bullish because it often means people or institutions are hodling it because they believe it will grow in value. 🤑

Quite literally as this Litepaper was finishing the final edits, crypto exchange Voyager ($VYGVF) announced that they are:

Not much of a heads-up given they made the announcement 48 minutes after the halted all activity by customers. Voyager ceasing all trading, withdrawals, and deposits is due to continued fallout from the collapse of Three Arrows Capital, the crypto hedge fund at the center of the mess that includes BlockFi and Celsius ($CEL.X).

We’ll keep you updated on this as it will undoubtedly spiral into another nightmare for its customers. In the meantime, read the full Press Release from Voyager here. 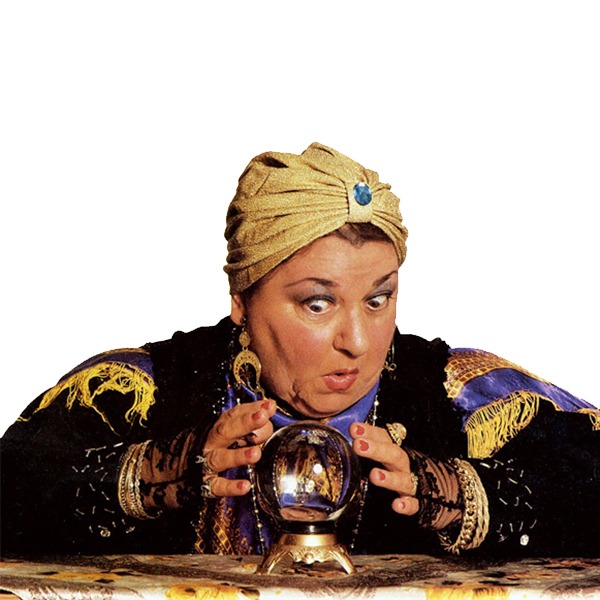 Get your tinfoil hats on; this is gonna get interesting.

One of the ‘Founding Fathers’ of Technical Analysis, W.D. Gann focused heavily on using time cycles to determine when an instrument may make major changes in its trend. For example, if a cluster of cycles falls around the same date range, and an instrument is trading at a major high/low, then it has a high probability of reversing.

A collection of those cycles are culminating between now and the end of next week. 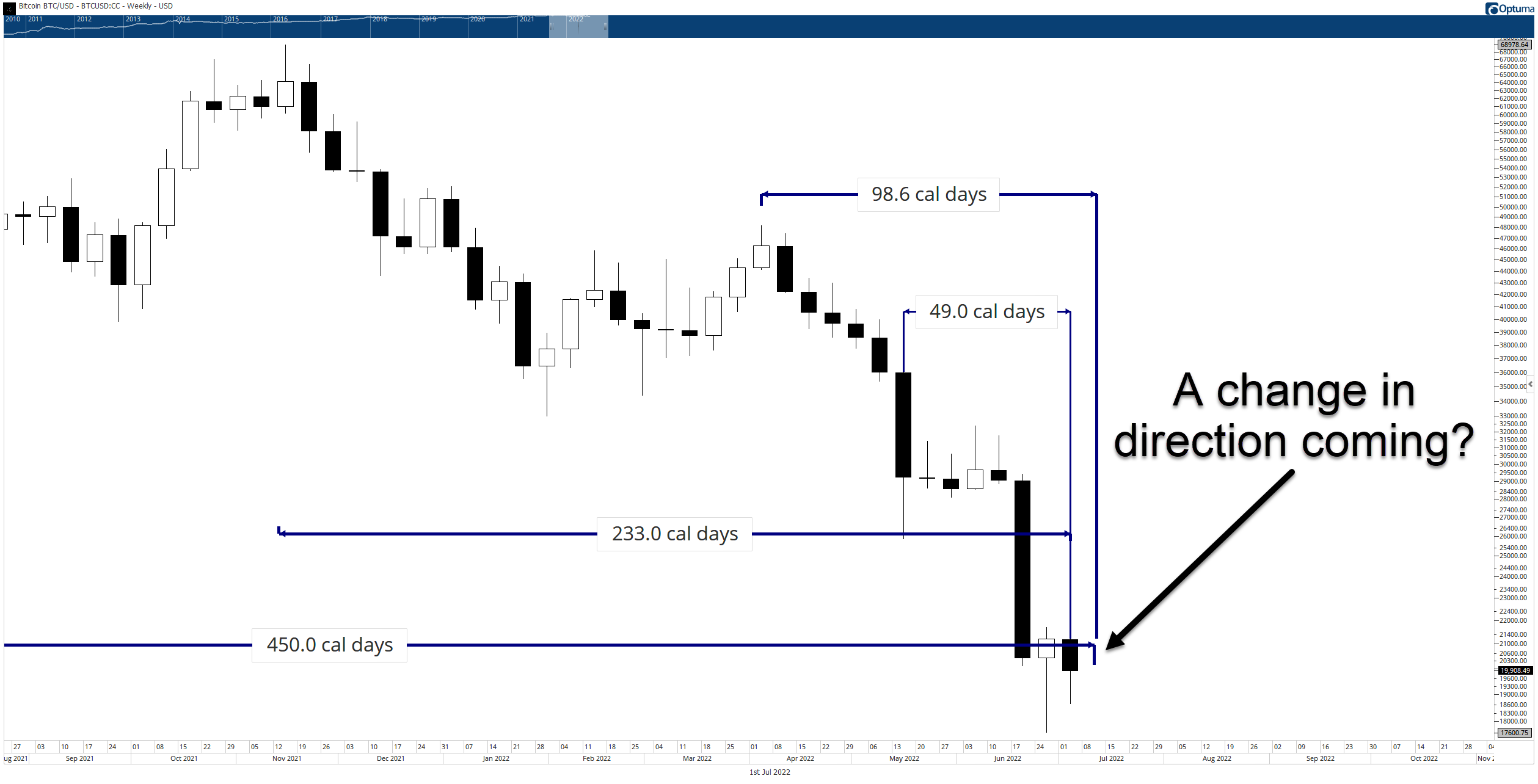 The most recent major swing high was on March 28, 2022, when Bitcoin got close to the critical $50,000 level. Bitcoin is currently 91 days from that date. The 90-day cycle is the most important Gann cycle. Gann said this cycle has the following behaviors:
Most powerful division of the one-year cycle.

Always colorful with his terminology, Gann called special attention to the 49-day cycle by calling it the ‘death zone.’ He stated that 49 to 52 days after a ‘blow-off move’ (a fast or large move in one direction), the move is likely to terminate abruptly.

Bitcoin is currently 49-days from the May 12th flash crash, which is also the last minor swing low.

Gann taught that July 7th is often a period where major advances and declines often culminate around this date and to watch for trend changes.

Putting it all together

The combination of the severe oversold levels and culmination of multiple time cycles should give crypto enthusiasts a heads up that there is a high probability of a bounce coming. Not guaranteed, but highly probable. 🌓

Whether they’re outside for July 4th or in your portfolio, there’s certain to be some fireworks over the holiday break! 🧨

😆 Binance taps the biggest TikTok creator, Khaby Lame, to be the face of its Web3. In addition, Binance signed soccer (football to the rest of the world) star Christiano Ronaldo for an NFT series coming out later this year. Read more from Fortune.

👎 Israel-based stock and crypto trading firm eToro quits its planned SPAC deal. Volatility in traditional equities and the cryptocurrency market have spooked investors from moving forward. Get the whole story from The Block.

⏱ Start the countdown for Cardano’s Vasil mainnet upgrade. IOHK submitted an updated proposal that pushes the possible date of the upgrade to occur in late July. The Vasil upgrade will lower costs, increase efficiency and provide developers with better performance. Check out Cointelegraph for more details.

Reminder no Litepaper on Monday because of the holiday – so look out for the Litepaper next week on Wednesday!