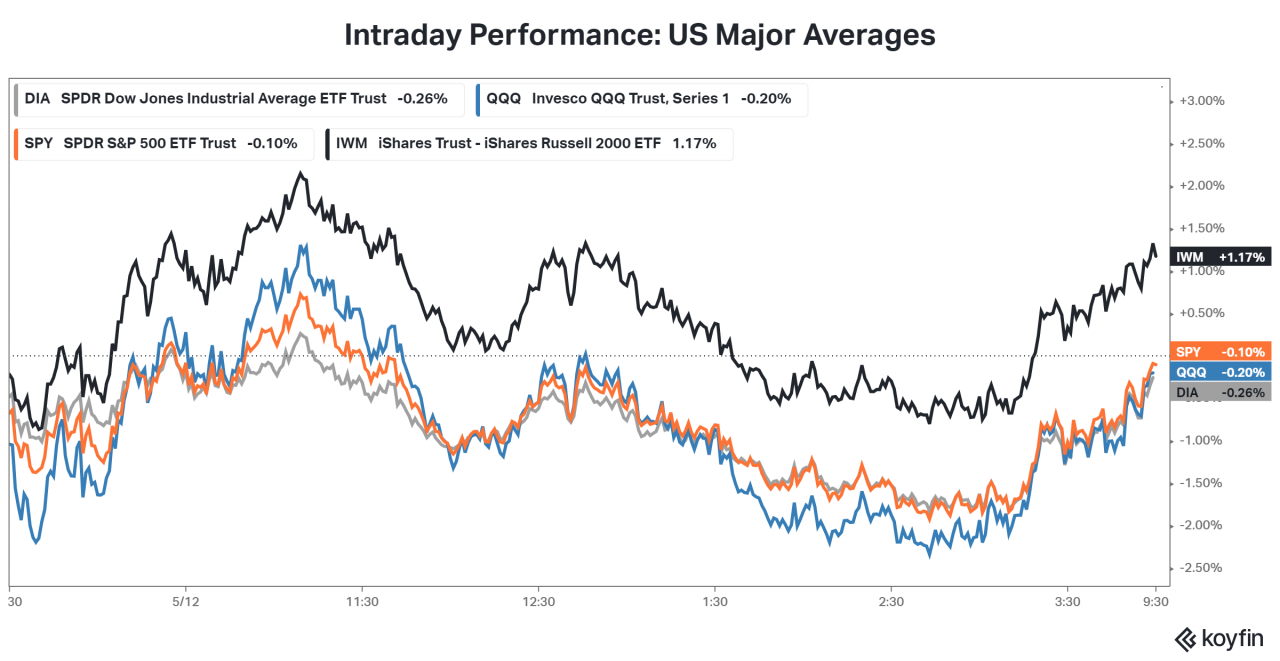 Apple weighed heavily on the large-cap indexes, moving (-2.69%) into bear-market territory. 🍎 🐻 As the last FANG stock to experience heavy selling, many are wondering if this is a sign that we’re edging closer to a bottom. We deliberate both sides of that argument in our main story.

On the earnings front, Affirm ($AFRM) was in focus, trending heavily on the streams and rallying over 20% ahead of its release and continuing its double-digit rally after hours. We’ve got the full scoop below. 📈

Meanwhile, global tensions heat up as Finland seeks to join Nato. Further retaliation from Russia could throw a wrench in any market recovery. More on that below. 🔧

Selling in the technology sector finally found Apple, knocking the market darling from its #1 spot down to #2 on the list of the world’s largest companies. 2️⃣

The stock fell 2.69% today, officially closing in bear market territory, meaning its share price has officially fallen more than 20% (on a closing basis) from former highs. 🐻

This matters to market participants for two main reasons:

First off, this is the last of the market generals to fall. The company joins Facebook, Amazon, Netflix, Google, and Microsoft, which have already experienced significant declines. 📉 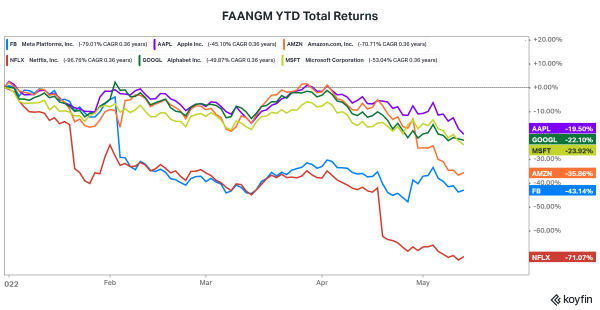 From a contrarian perspective, some market participants are viewing this as a potential sign that the broader weakness in the market may be inching closer to an end. ⌛

Much of the heavy selling over the last year has been in the most speculative/growth-focused areas of the market (SPACs, unprofitable tech companies, high-flying IPOs, etc.)

But as mega-cap tech names that were previously considered to be safe havens are now also getting hit, could things be headed too far on the downside? 🤔

On the flip side is the second reason why Apple’s weakness matters.  ⚖️

Simply put, Apple is the largest U.S. company, and therefore it has a massive weight in all of the major indexes.

And if we take a look at the year-to-date performance of the S&P 500 ETF, the largest negative contributors to the index are all technology stocks, with Apple being the second-worst contributor behind Microsoft:

So the bearish argument is clear. 💡 It’s going to be incredibly difficult for the broader market indexes to find a bottom until Apple and its mega-cap peers stop going down. That’s just how portfolio math works.

Regardless of which side of the fence you fall on, Apple is going to remain in focus for investors in the days/weeks ahead. 👀

Check out the Apple stream to read conversations about $AAPL & share your thoughts!

The market has been a consistent sea of red lately, but a few tickers today offered a glimmer of hope ✨ — among them was $AFRM, the buy-now-pay-later (BNPL) company, which reported its Q3 earnings and soared +23.31% at the close and another +28% after hours.

Affirm’s quarterly revenue clocked in at $355 million, down from $361 million last quarter. However, the company was able to lower its transaction costs in Q3. Here’s a figure demonstrating Affirm’s strong performance across the board in the third quarter:

Clearly investors were stoked about the news, because $AFRM took off today. 🚀 Here’s its intraday chart: 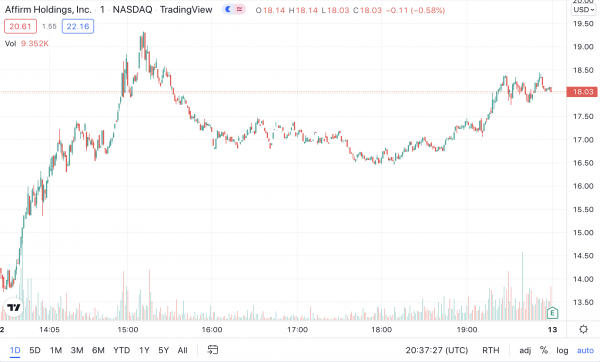 In the latest development of tensions in Europe, Finland has decided to join NATO and, in response, Russia’s Foreign Ministry said that the nation would “…be forced to take retaliatory steps, both of a military-technical and other nature, in order to stop threats to its national security arising.” 🌎

For obvious reasons, this could be a big deal for global markets. Here’s a quick summary of what this move would mean for international relations:

This story is still developing and we’ll be keeping an eye on it in the weeks ahead. 🔎

🏦 Four more years of Papa Powell as the Senate confirms his second term. As the Federal Reserve faces its toughest inflation battle in decades, the Senate voted overwhelmingly (80-19) to give Jerome Powell another four years at the helm. With his first term being marked primarily by challenges presented by the COVID-19 pandemic, his second term is likely to remain focused on taming inflation without sending the economy into a major tailspin. CNBC summarizes the news.

📈 April producer prices notch fifth straight month of double-digit YoY increases. The report comes a day after the CPI data showed that consumer inflation fell for the first time since August. The slight MoM decline in producer prices was driven by a large decline in energy, as well as a slip in food prices. Investors continue to watch inflation numbers closely as they anticipate further action from the Federal Reserve in the months ahead. The WSJ breaks down the print.

😷 North Korea goes into lockdown after first local Covid infection. Roughly two years after closing its borders, North Korea is implementing a nationwide lockdown after discovering its first locally-transmitted case of COVID-19. The strategy appears to follow China’s “closed-loop” approach to stopping the virus from spreading. The move will put further pressure on a nation that’s already dealing with sanctions, crop failures, and other factors that have left its economy in a precarious state.  Read more in the WSJ.

☕ Twitter announces hiring freeze & two of the company’s top execs leave following Elon Musk’s acquisition of the platform. Keyvon Beykpour, Twitter’s GM of Consumer, and Twitter’s revenue product lead Bruce Falck both publicly disclosed their departures and accepted positions at other tech companies. A Twitter spokesperson also commented: “Effective this week, we are pausing most hiring and backfills, except for business-critical roles. We are also pulling back on non-labor costs to ensure we are being responsible and efficient.” Here’s TechCrunch with more Twitter tea.

🎮 A worker reckoning at Nintendo

⚠️ China’s Economic Slowdown Is Rippling All Around The World

💷 Stagflation looms in UK as economic growth grinds to a halt