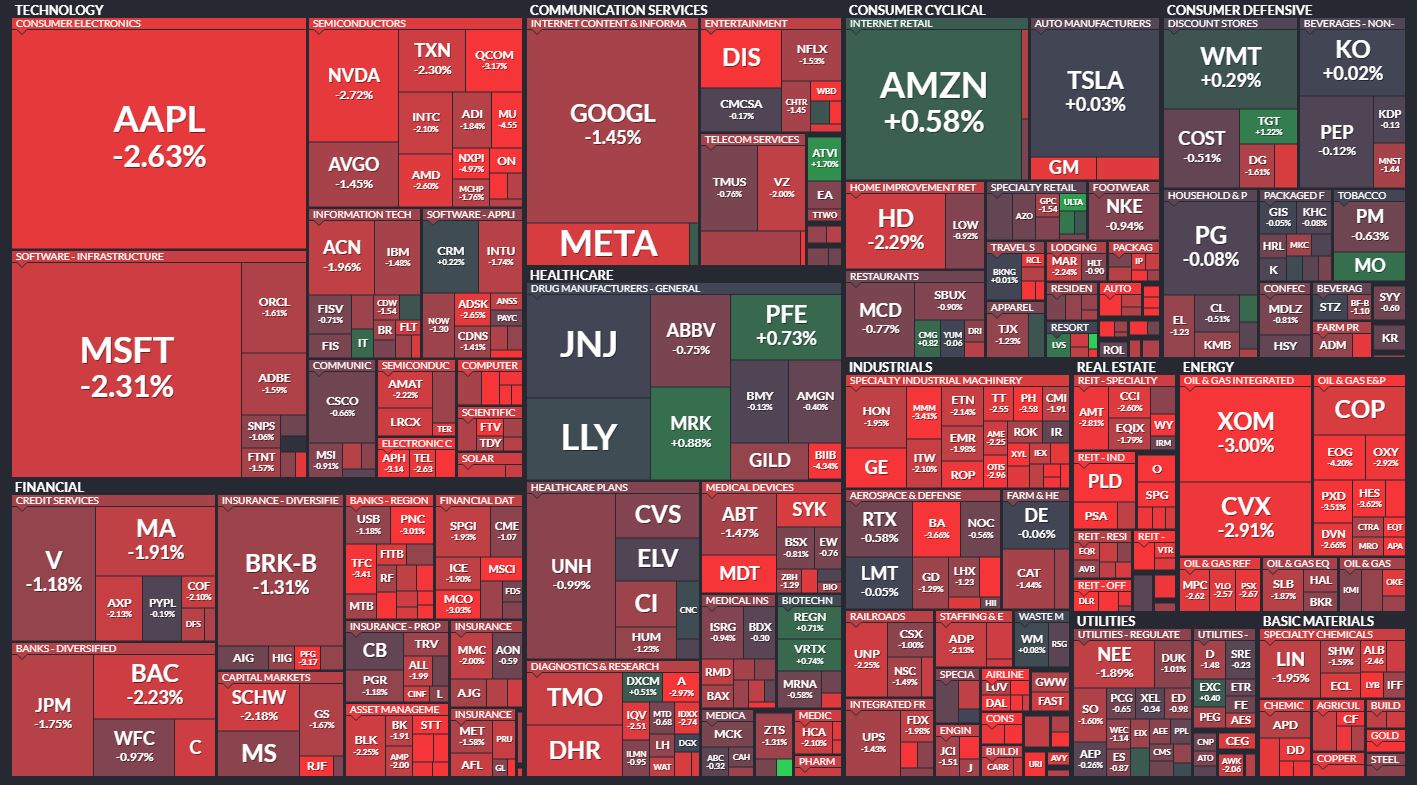 In crypto news, BlockFi filed for bankruptcy as the FTX contagion continues. ECB President Lagarde reiterated her call for a MiCA II framework in response to the FTX collapse. And a young crypto founder, Tiantian Kullander, died suddenly in his sleep last week.

🃏 P.S. Our 3rd annual Chips for Charity is this coming Saturday. Snag your seat today to compete for the $5,000 prize and support a great cause! ₿

Additionally, Elon Musk claimed that Apple threatened to remove the Twitter app from the App Store. He claims it is part of Apple’s “app review moderation process” and that they won’t provide a reason why Twitter’s app could be removed.

Lastly, traders are watching $AAPL shares make a lower high, which many traders view as a sign of further downside to come. The bellwether stock has held up better than its peers but would weigh on the market heavily if it began to move lower.

We’ll have to see if today’s weakness continues or if it was a one-off. Either way, traders will definitely be watching this chart into year-end. 👀 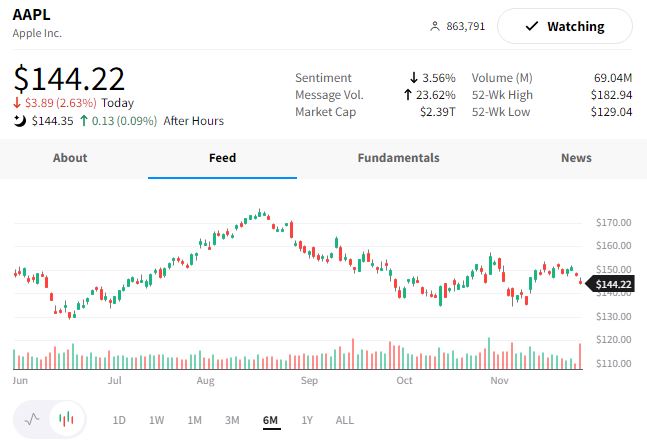 The company saw revenue growth of 65% YoY to $4.99 billion, beating expectations of $4.31 billion. Revenues from online marketing services rose 58%, transactions services 102%, and merchandise sales fell 31%. With that said, its merchandise sales are not a material business line for them. 😮

Much like other e-commerce players in China, the company continues to invest in long-term growth despite being weighed down by Covid lockdowns. Investors cheered the positive results and continued to focus on the future. 👍 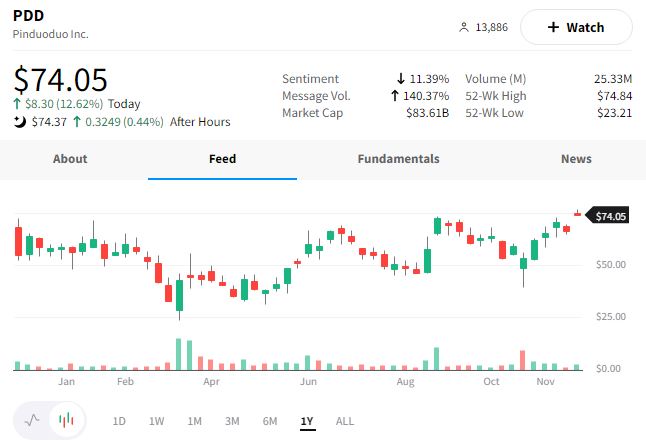 While energy remains the best-performing sector year-to-date, many traders are wondering whether or not it will “catch down” to the price of crude over the coming months.

Bulls argue that the structural energy issues and record profits justify the strength of energy stocks. However, bears say that this divergence cannot last. And with global demand for oil and other energy products falling, then energy stocks will have to fall. 🐂 🐻

Who will be right remains to be seen, but this is a major theme the community is watching. 👀 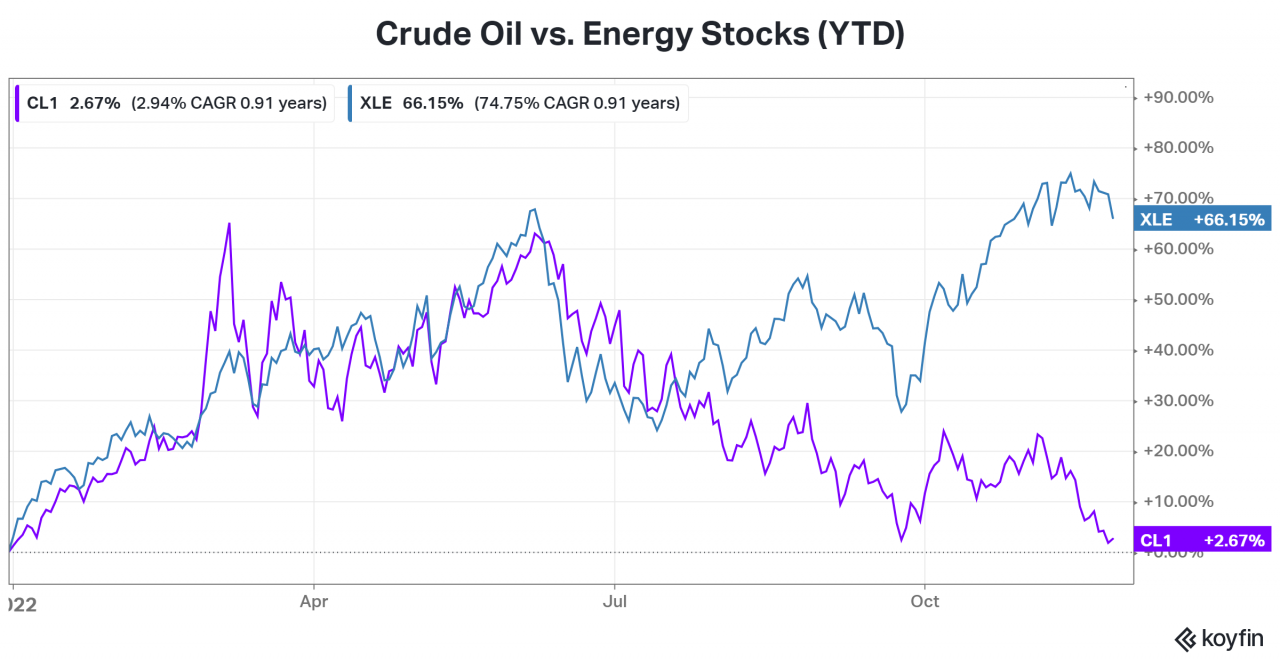 🤝 Yahoo takes 25% stake in advertising network Taboola. Yahoo will receive the stake in exchange for Taboola becoming Yahoo’s native advertising partner in a 30-year commercial agreement. As regulators crack down on privacy-invasive targeting methods, ad tech companies like Taboola will use partnerships like this to reach their target audiences in an effective manner. For Yahoo, it allows them to improve the advertising on their site, making it more relevant to users. More from TechCrunch.

⚖️ Meta fined $276 million by Ireland over data leak. Ireland’s Data Protection Commission (DPC) continues to pummel Facebook parent Meta, this time with a $276 million fine for an April 2021 data leak that exposed 533 million users’ information. This is the third fine imposed by the DPC this year and one of many imposed by European regulators over the last few years. The Verge has more.

🏦 Big banks consider reimbursing scammed Zelle customers. Zelle has become a popular alternative to apps like Venmo or CashApp. However, with that surge in popularity came some fraudulent activity. As a result, several of America’s largest banks are working on a playbook to refund customers and each other for illegitimate transfers. They hope that collaboration will allow them to boost security and consumer trust in the peer-to-peer payment system. More from Fox Business.

📆 100 UK companies create a four-day work week. A permanent four-day workweek is here for some companies…and without a pay cut! The companies testing the program only employ about 2,600 people, but they’re hoping their efforts and results will help spark other organizations to follow along. They claim that over the course of their test programs, they’ve seen meaningful increases in employee wellness and wellbeing, as well as customer service and talent relations. The Guardian has more.

❌ Amazon shuts down another business line in India. Amazon recently announced it’s expanding its cloud business in India, but at the same time, it’s pulling back on some of its other business efforts in the country. The company today reported that it’s shutting down its wholesale distribution business, though it did not say why. Analysts suspect it’s because of heavy competition in India and the need for the company to cut costs. With that said, it will partner with customers and stakeholders to discontinue the program in a phased manner. More from TechCrunch.

Semiconductors remain a crucial focus for market participants as a leading indicator for the tech sector and global economy. As a result, when big names in the industry report earnings, they attract a lot of attention. 👀

Today we heard from Samsung Electronics, which saw its quarterly profits fall 69% to an 8-year low of $3.5 billion. Revenues also fell 8% to $57.3 billion. Analysts had expected the poor results given the company’s pre-earnings announcement earlier this month, but these were still difficult for investors to stomach. 🤢