It was a volatile day on Wall Street after an NYSE trading issue led to many stocks being halted near the open — let’s see what else you missed today. 👀 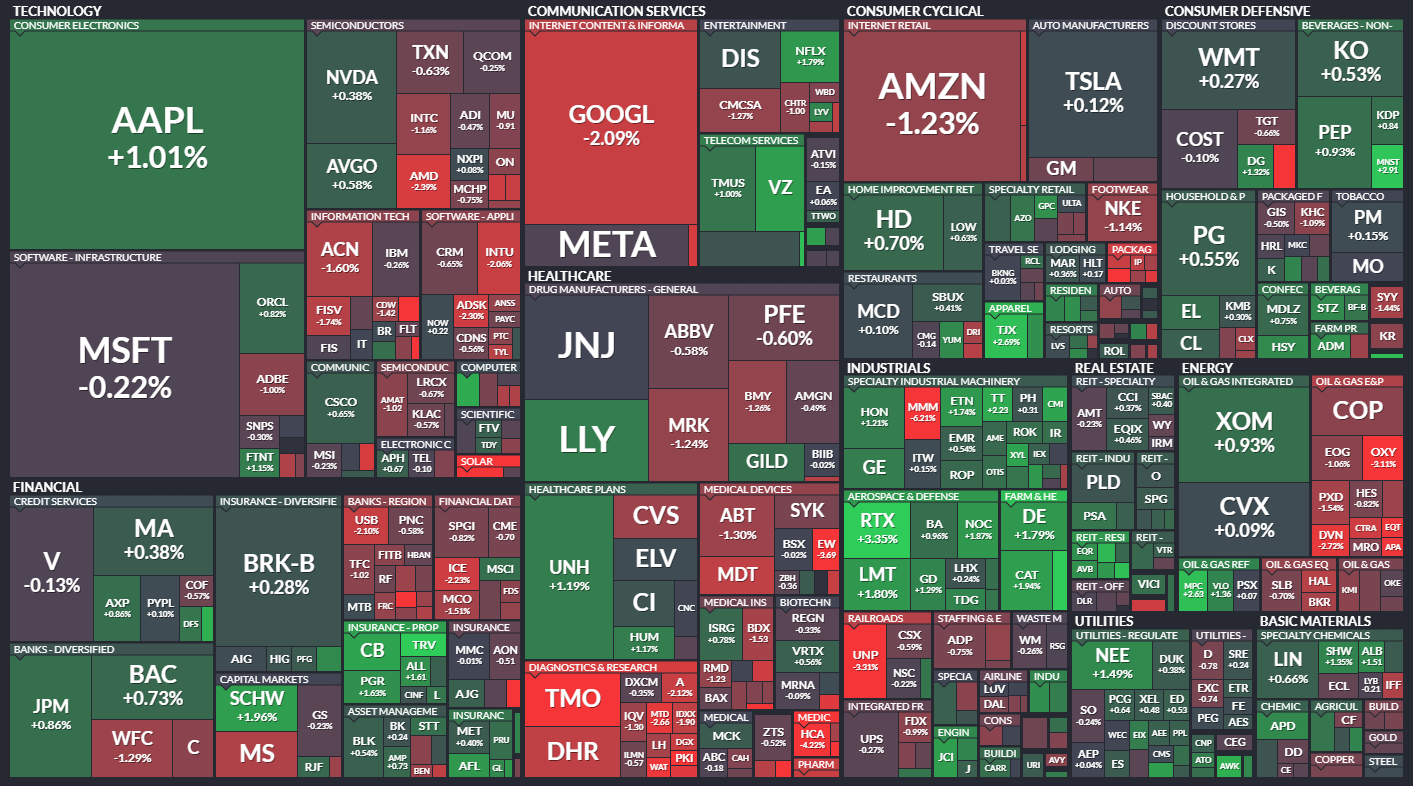 In economic news, U.S. business activity contracted for the seventh straight month in January though at a moderating pace. The Richmond Fed index also showed a slight contraction in activity in January after notching a small gain in December. And in the eurozone, the purchasing managers’ index (PMI) rose to 50.2 in January, returning to growth for the first time in six months. 🏭

Meanwhile, job cuts are concentrated in the tech sector, but other industries are joining the cost-cutting trend. Ford is cutting 3,200 European jobs, and 3M is cutting 2,500. The labor market remains tight, with certain companies like Walmart needing to raise wages to attract workers. 💼

Cassava Sciences fell 20% after midstage results for its Alzheimer’s treatment failed to impress. 💉

Robert Iger and Henry Kravis are part of a five-investor group that’s paying $175 million for a 3.3% stake in Thrive Capital. 💰

There’s no ‘soft landing’ in sight for the mattress market as Serta Simmons Bedding files for bankruptcy protection. The company, which accounts for nearly 20% of U.S. bedding sales, blamed a slowing economy and rising interest rates for weak consumer demand. 🛏️

In crypto news, the FBI said North Korea-linked hackers were behind the $100 million attack on the Horizon Bridge. Genesis is trying to void Gemini Earn customers’ claims over the GBTC sale. And Bloomberg is reporting that Binance mistakenly mixed customer funds with B-token collateral. ₿

One of today’s biggest earnings announcements came from Microsoft, which beat on earnings but missed revenue expectations.

Driving some of the earnings weakness was a $1.2 billion charge associated with cutting 10,000 jobs, revising its hardware lineup, and consolidating leases during the quarter. Like its peers, Microsoft is taking proactive steps to streamline its operations and prioritize its growth initiatives.

In terms of sales, the company’s YoY revenue growth was the slowest since 2016, rising just 2%. 🐌

Getting into product segments, Windows EOM fell 39% YoY, and Xbox content + services fell 12%. These declines were largely expected, as the demand for personal computers (PC) and gaming items pulled back from the covid-period highs.

Overall, investors are focused on the positives in this report. Amazon shares also jumped after hours on the back of this cloud news, as it’s investing heavily in Amazon Web Services (AWS).

$MSFT shares are up 4% after hours. We’ll have to wait and see if this news truly is positive or if investors have their heads in the clouds… 🤷 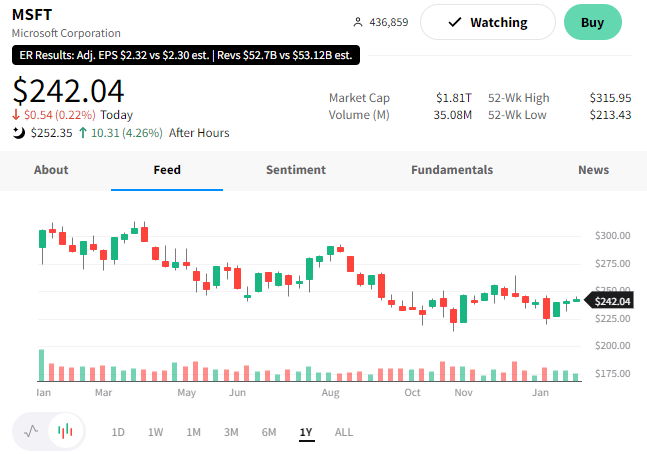 MMM, That Wasn’t So Good

3M reported adjusted earnings per share of $2.28 vs. the $2.36 expected, while revenues of $8.1 billion met expectations.

Within its report, it shared a pessimistic outlook for the economy and consumer spending in 2023. As a result, it issued full-year guidance of $8.50 to $9.00 per share, well below the $10.20 analysts are estimating.

The company also announced that it’s laying off roughly 2,500 manufacturing employees. Economic data has shown a significant decline in manufacturing activity, and we’re now starting to see it show up in major companies’ earnings. 🏭

Lastly, 3M continues to struggle with lawsuits over the potentially faulty earplugs it sold to the military. That continues to be a significant overhang for the company.

As a result of the macro uncertainty and operating risks 3M faces, $MMM shares traded down about 6% on the day. 📉 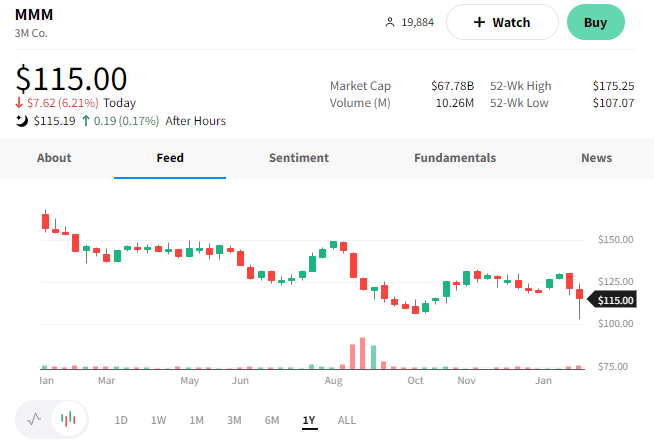 As for the company’s outlook, it expects revenue growth in the high single digits. It also expects adjusted earnings per share of $1.60 to $2 and free cash flow of $3.4 billion to $4.2 billion.

The one soft spot is its renewable energy business, GE Vernova, which expects a $200 to $600 million loss in 2023. However, investors may overlook that because it expects to spin off its energy business into a separate company next year. So maybe they figure that will be someone else’s mess to fix.🤷

Nonetheless, $GE shares were up about 1%, pushing to one-year highs on the news. 📈 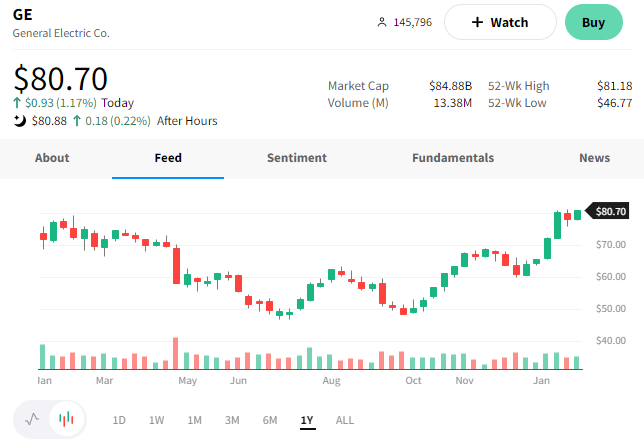 The company has benefited from the U.S.’s aid packages to Ukraine, and overall geopolitical tensions remain high. As a result, its missiles and defense unit sales rose 6.2% in the quarter.

Management says costs will continue to rise in 2023 but offered an upbeat outlook. It expects a full-year adjusted profit of $4.90 to $5.05 per share, while analysts forecast $5.03. 📝

$RTX shares were up about 3% on the day. 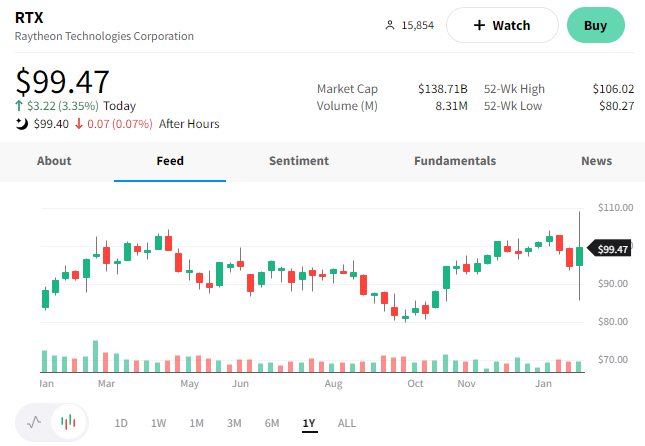 The company said its backlog increased 11% in the quarter, driven by a 15% in its Aeronautics division. That business unit saw a 7% jump in revenue, largely due to a higher volume of F-35 production contracts. The Biden administration’s plans to request congressional approval for a $20 billion sale of new F-16 jets to Turkey would also benefit the company. 🏭 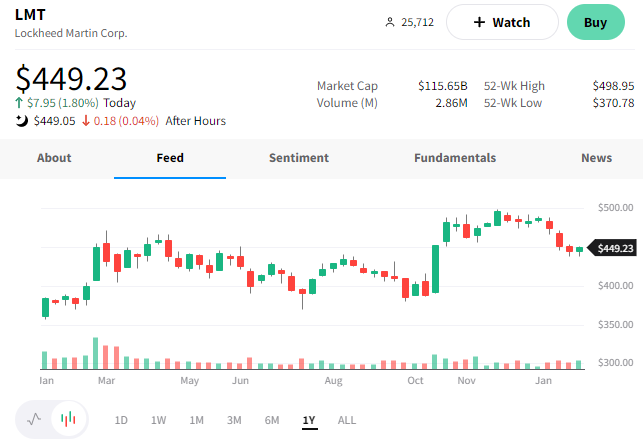 💊 Amazon launches a monthly subscription for unlimited prescriptions. The company is launching a $5 monthly subscription called RxPass, exclusive to Prime members and includes generic medications for over 80 common health conditions. The fee is a flat rate and doesn’t increase based on the number of prescriptions ordered, and medications can be delivered monthly or quarterly. While the company continues to cut costs in certain areas, this investment makes it clear it’s still interested in expanding its healthcare presence. The Verge has more.

🏦 Qatar doubles its Credit Suisse stake amid restructuring efforts. The Qatar Investment Authority has become the second-largest shareholder in the swiss bank after doubling its stake to 6.6%. The Saudi National Bank remains the largest holder with a 9.9% stake, and Middle Eastern investors now own more than a fifth of Credit Suisse’s stock. The struggling bank is still amid its turnaround and expected to report a roughly $1.6 billion Q4 loss on February 9th. More from CNBC.

🕪 Voice AI company SoundHound raises a new round. Just weeks after laying off 40% of its staff, SoundHound has raised $25 million to give it the cash necessary to survive a more challenging environment for tech startups. The unicorn was valued at $2.1 billion when it went public via SPAC in November 2021 but has fallen nearly 90% since then. With artificial intelligence back in the spotlight to start the year, the company hopes it can use the new funding and renewed interest to get its future back on track. TechCrunch has more.

🗺️ Strava acquires Fatmap, a 3D mapping platform. The activity tracking and social community platform Strava is acquiring the European company building a high-resolution 3D global map platform for the great outdoors. FatMap was founded ten years ago, initially providing ski resorts with high-resolution maps. Since then, it’s partnered with satellite and aerospace companies to provide detailed maps that arm anyone venturing into mountainous terrain with the information they need to navigate their journey. The terms of the deal were not disclosed. More from TechCrunch.

✒️ Google hit with a second U.S. antitrust lawsuit. The U.S. Justice Department filed its second antitrust lawsuit against Google in two years, but the first under the Biden administration’s watch. The case focuses on Google’s online advertising business and seeks to make Google divest parts of the business. The federal suit joins three other antirust lawsuits created by large groups of state attorneys general. Additionally, several states have joined the Justice Department in its lawsuit. CNBC has more.

🕛 Scientists set Doomsday Clock closer to midnight than ever before

The Nasdaq 100 logged its fourth straight week of gains as stocks move “full-steam ahead” into next week’s Fed decision. Let’s see what you missed today. 👀

Growth With An Asterisk

The stock market keeps on trucking ahead despite everything the world throws at it. Let’s see what you missed today. 👀

Don’t Call It A Comeback

Despite lackluster earnings, stock market bulls managed to reverse the day’s initial losses. Let’s see what else you missed today. 👀

Which Index Has It Right?

Investors remain stuck in the middle of leading economic indicators pointing to recession and the Nasdaq leading the stock market higher — let’s break it all down and see what else you missed today. 👀

Another week in the market has passed as this year’s trends begin to emerge. 👍

It’s another big day in tech earnings, so let’s just jump into it.

Amex Sees No Signs Of Recession

Despite muted results and outlook from Visa and Mastercard, American Express came into today’s earnings report like the Kool-Aid Man. 🤩

Needless to say, the results have its investors saying…”Oh yeah!”